Does the U.S. Fifth Amendment prevent one from being tried again for the same crime?

I have a question about the Fifth Amendment.

Imagine I committed a crime but I was acquitted at trial. After some time, some new evidence came up showing that I did do it. Does the Fifth Amendment say that I can't be charged for it again, even if there is new evidence?

That's basically correct. The Double Jeopardy clause prevents the federal and state governments from trying you again for a crime that you've already been acquitted of, no matter what new evidence turns up. Even if you confessed to the crime, you could still not be tried.

The relevant text of the Fifth Amendment reads:

No person shall ... be subject for the same offence to be twice put in jeopardy of life or limb.

The case of Mel Ignatow is probably among the most famous examples. He was charged with murdering a woman, but acquitted at trial. About a year later, a guy laying carpet at his house pulled up floorboards and found the victim's jewelry, along with pictures of Ignatow murdering the victim. Ignatow confessed, but the state couldn't charge him with murder again, though they could charge him perjury for testifying that he hadn't killed her.

So the answer is yes, the Fifth Amendment generally prevents the government from trying you for a crime you've been acquitted of.

There are two main caveats here. First is the dual-sovereignty principle, which accounts for the fact that almost anywhere that the Fifth Amendment applies, a person is subject to the laws of two sovereign governments: the federal government and that of whatever state the person is in. For example, robbing a bank in Los Angeles would violate the laws of both the United States and California. If California put you on trial, but you were acquitted, the Double Jeopardy Clause would bar California from trying you again, but it would not be a defense if the federal government wanted to try to charge you again.

Second is the language about "the same offence," which is not as clear as it might sound at first. In the course of committing a crime, a person can easily commit many other crimes without thinking of it. In your bank robbery, for instance, you could easily break the following additional laws: trespassing, menacing, carrying a concealed weapon, brandishing a firearm, larceny, grand larceny. This raises the question of what affect your acquittal on the robbery charge has on the possibility of charging you on these other offenses.

The applicable rule is that, where the same act or transaction constitutes a violation of two distinct statutory provisions, the test to be applied to determine whether there are two offenses or only one is whether each provision requires proof of an additional fact which the other does not.

This is easier to understand in practice than in theory. If you want to bring charges for the same conduct without violating the Double Jeopardy Clause, you need to be able to make a Venn diagram where the first charge and the new charge each has at least one element that the other does not. So map out the following possible offenses involved in a robbery:

So now you have a Venn diagram that looks like this: 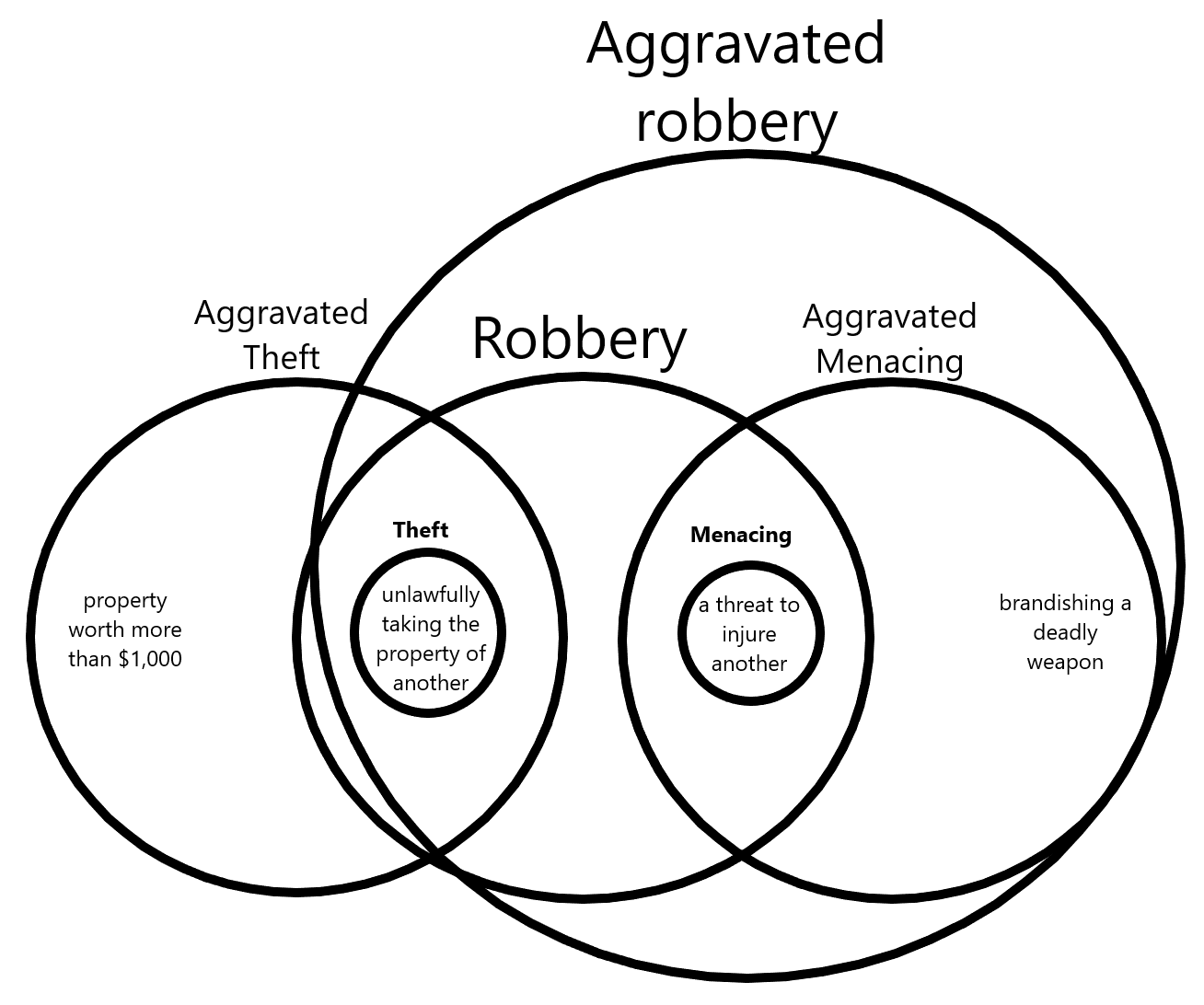 This means the prosecutor can't bring a charge for the "greater offense" of aggravated robbery, because the earlier robbery charge didn't require proof of anything that aggravated robbery would not. The prosecutor also can't bring a charge for theft or menacing, because neither requires proof of anything that robbery did not. These are called "lesser included offenses."

Not the answer you're looking for? Browse other questions tagged united-states fifth-amendment double-jeopardy or ask your own question.

1
Double jeopardy and similar crimes
0
Does double jeopardy apply for different charges of the same case?
9
Does Double Jeopardy prohibit prosecution, for the same event, in both Federal and State court?
2
What is the opposite of "lesser included offence"?

19
If I've been prosecuted for a crime by another country can the US prosecute me for the same crime afterwards?
10
Can someone get protection under Double Jeopardy for a crime by arranging to be put on trial with fake evidence that is then disproven?
5
Why does double jeopardy apply even when the acquittal was due to insufficiency of evidence?
3
Can defense request findings of fact before resting?
9
What prevents someone from claiming to be the murderer in order to get the real murderer off?
2
Does double jeopardy protect a suspect from the consequences of admitting guilt after being declared not guilty?
2
Could I create doubt of a crime by having multuple people suggest, but not actually claim, that they were the murderer?
7
Does the double jeopardy clause prevent being charged again for the same crime or being charged again for the same action?
3
Why isn't double jeopardy overruled by new conclusive evidence?