Does Council removal of a vehicle constitute Trespass to Chattel?

Recently recieved a notice stuck on my car windscreen,
Which is a removal Notice giving 7 days to remove the vehichle.
or Until the 16th of November. I live in Norwich in the Uk & the local council is Norwich City Council.

The car is not parked on a road, nor on a highway per-say:
Google earth image included for referance: 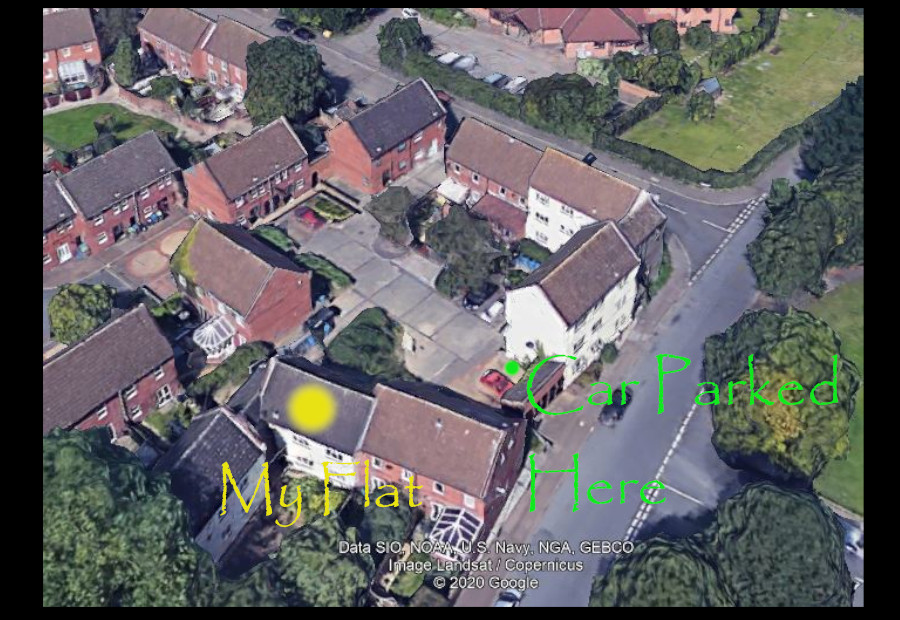 First Act that they mentioned being the Refuse Act, A Car is not Refuse, Rubbish, Fly-Tipping & Dog Doo Are Refuse, if anything it is a Re-cycleable & will be melted down & made into a Smart Toaster or someones fridge freezer..

First Paragraphs of the letter states:

In pursuance of their powers of the above named Authority HEREBY GIVE NOTICE
that they are of the opinion that this vehicle is in such a condition that it
ought to be destroyed and that UNLESS THE VEHICLE IS REMOVED WITHIN 7 DAYS
from the date hereof they will, in pursuance of the above acts,
remove the vehicle and arrange for its retention until the
current licence expires and its subsequent destruction

The car is not in a state of disrepair, it is not damaged, not wrecked, has not been abandoned & is not burnt out. I have declared the car as SORN and un-taxed the car until I could save up the money to get items repaired on it that are quite expensive. There are no parking restrictions in my area, we do not have wardens, it is not parked on a single or a double line. Nor is it in my opinion parked on a road or a highway. It is not obstructing anyone access to their property, it is not block or obstructing any pathways or entrances, sheds, garages or any other propetys.

it is the local The Area Management Team, Which is part of or under the control of the local Environment Agency which has issued this notice.

My Question is, if they try to remove my vehichle without my consent,
Does that constitute Treepass to Chatells or Torts (Interference with Goods) Act 1977 & if it doesn't what other grounds can you use for Appeal?

They have marked at the bottom of the letter that it Appears to be a Non-Runner, but they cannot possibly tell that without opening the doors, putting the key in the ignition and trying to turn the motor over... It is a running car, which still works, it just needs a new clutch and a few other things fixed. It does not have any flat tyres, nor does it have any outside cosmetic damage for them to state its in such a condition that it ought to be destroyed

Partially Related Questions i can find:
is a Carpark a road?
Managing Vehicles on Council Estates
Know Your Parking Rights
Nuisance Parking to Become illegal
Council responsibility for abandoned vehicles on public roads
Criteria of an Abandoned Vehicle - Coventry

Also as a side note the Notice is Addressed to The Owner of the Vehichle By DVLA's own documentation. I am the registered keeper Not the Actual owner.. I'm not very good at reading through legislation documentation, its purposefully obscure & non-sensical with all the different amendmants, side notes, double-speak, redactions and implications.. Is this notice Written as a contract? And an opinion as they have worded it is Subjective and not based on Law. Can someone with a better understanding of #uklaw please give me some advice or add some constructive comments or an informative Answer..

I Would fully understand if the car was a wreck, if it was blocking someones access, if it had three wheels missing and no windshield, Or if it was burnt out. But it is none of the above. Plus technically speaking one of those parking spaces is designated for my flat, There is plenty enough parking for every other resident withing this neighbourhood. Two Carparks Both either side and multiple small spots, aswell as on-road parking on all other sides of the flats.

This Document is from a different Council or Burrough but is usefull information to Know:
FixMyStreet Article

the road and west side footway are adopted but the parking spaces are not. In that case, the parking spaces will be private land, owned by the housing > department and used under the terms of the leases and tenancy agreements. In that case, the council as parking enforcer couldn't do anything about SORNed vehicles (which would not be illegal) or untaxed and unSORNed ones, > which would be illegal but not removable.

As landowner, it could take action under the law of trespass, or as a breach of the tenancy agreement or lease. Most modern social housing leases > have rules banning SORNed vehicles

Legal Definition of a Close

1 private property, usually enclosed by a fence, hedge, or wall.
2 a courtyard or quadrangle enclosed by buildings or an entry leading to such a courtyard.
3 the entry from the street to a tenement building.

Legal Definition of a Cul-De-Sac For other peoples reference.

Thanks in advance for anybodys inputs.

However, they do have legal grounds. Following the procedure laid out in the relevant Act makes the car refuse under the Act notwithstanding your opinion.

Move it or lose it. Or seek an injunction preventing the council removing the vehicle- this will likely fail.

Not the answer you're looking for? Browse other questions tagged united-kingdom traffic vehicle motor-vehicle environmental or ask your own question.

3
Is a carpark a road, given this definition in New Zealand law

5
Are there laws prohibiting people from obstructing the view of an unmarked radar?
3
Emergency vehicle laws in the United States
3
Expired tag sweep in a private apartment parking lot in Florida
0
Accident involving left turn into private drive and a passing vehicle
0
The Highway Code and private land - parking and controlled parking zone (by private company)
2
Is a police car parked perpendicular to the road (with flashing lights) sufficient by itself to legally establish road closure to all traffic?
3
Is a carpark a road, given this definition in New Zealand law