What effect does bad English have on warnings / disclaimers?

I've come across more than one case of ill-phrased 'legalese' and often wondered where the line is with respect to enforcibalilty etc. For example, a McDonalds promotion which disclaimed: "Offer ends October 30 or while supplies last". Does nonsense invalidate it, or is it a case of clear intent conveyed in muddled language?

I was reminded of this by a sign I saw on a recent trip: 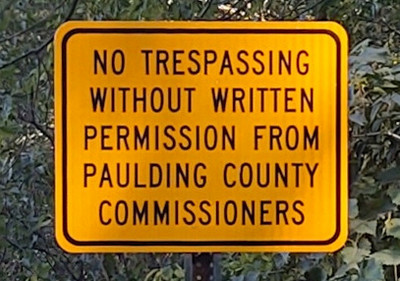 Yes, we know what they mean, but really, is this enforceable?

Law does not have an all-encompassing syntax and structure that, if not followed, makes it null and void. If a reasonable person could determine that (in the example of the sign you have) you are required to get written permission from any or all of the Paulding County Commissioners, then the sign is enforceable. I honestly don't see anything wrong with the sign you are displaying, it is reasonably clear.

If, for example the notice contains an ambiguity or unclear phrase, the "spirit" of the law or sign is upheld. If the sign had said something to the effect of "No trespassing without permission". It doesn't say who you need permission from, but you can reasonably ascertain that you must have permission from somebody in control of the land.

There is no line in the sand here. Often when a dispute in a contract comes up where it could be interpreted more than one way, it is often interpreted in favor of the person who did not write the contract.

Isn't really "ill-phrased" either. I assure you that those statements are vetted by highly paid lawyers from many jurisdictions. I'm not sure what "nonsense" you would be referring to in there. If the vendor runs out of promotional materials the promotion ends... If they had said "free hats to the first 100 customers on December 31st", you can't show up as the 101st customer and demand a hat, nor could you show up on January 1st (even if there were not 100 customers the previous day) and demand one either.

It's only a problem if it's ambiguous or unclear.

Courts contend with grammatical mistakes and typos when interpreting text all the time, and have ways of determining what they mean—in fact, determining what text means is a large portion of what courts do. Even typographical errors (often called "scrivener's errors") that change a contract's meaning can be corrected with evidence of what it was supposed to say.

A good example of a borderline case of bad grammar is a Virginia law that required drivers to "stop...any school bus [that was letting out children]." Note the missing "at". The trial court judge found that it was obvious what the statute was supposed to say, but the appeals court found that because it was unambiguous (albeit unreasonable), the law should be interpreted literally. How literally such things are interpreted varies by jurisdiction, as some follow the "absurdity doctrine" that states that when choosing between possible meanings, to eliminate any that would produce absurd results.

The McDonald's offer is also clear: all interpretations other than "the offer ends Oct 30 or when supplies run out, whichever happens first" make no sense (an offer can't end "while supplies last"), and no reasonable person would interpret it that way (which is the general standard for interpreting the meaning of text in an advertisement).

I would have liked to comment on this, but not enough reputation...

I think it's a clash of culture. The OP's view on these signs seems grounded in pure logic (possibly computer science?) I assure you that from a purely logical perspective, both statements are indeed nonesense.

If I was writing this as computer code, the offer would NEVER be applicable.

The intended meaning (based on "common sense", not pure logic) obviously is "Offer will stop being valid by October 30, or when supplies run out, whichever occurs first"

Looking at these statements with "computer eyes" makes them sound illogical and inapplicable. But... The law clearly is meant for the common person, and to them the intent remains clear, despite the (demonstrably) garbled logic.

... It does make the statements incomprehensible to non-neurotypical people, though. So it might be argued there is a problem here in term of accessibility (in juridictions where such concept applies)

As to why it's necessary to state the obvious, it's about hunting, implied easements over land, and traditional usage. "No Trespassing" means exactly what it says and has to be said in order to restrict traditional assumptions about use of land. For more details, go here.

Not the answer you're looking for? Browse other questions tagged disclaimers language or ask your own question.

5
Do claimless advertisements need to have disclaimers?
0
What is the legal interpretation of "does not bear all of the following"?
2
Why don’t video game consoles have seizure warnings anymore?
1
Why does 48 U.S.C. § 864 require English in Puerto Rican federal court if the US has no official language?