In 2018, Patreon removed content creator Carl Benjamin (Sargon of Akkad) from their platform over violations of their terms of service by using racial and homophobic slurs.

Recently, calls seem to have emerged within Benjamin's fanbase for followers to pursue arbitration claims against Patreon over his removal. Claims have further been made that due to the specific way in which the Patreon terms of service are structured, dealing with a sufficiently large barrage of complaints would bankrupt Patreon, even if all the claims ultimately fail. In particular, I came across the following YouTube comment which sets out the specifics:

Patreon's ToS is a contract of adhesion. Non-negotiable.

Within that contract, two things were stipulated—both the drafter of the contract (Patreon) and the user agreed: 1) that binding arbitration would be the method by which disputes were resolved, and 2) both parties waived their rights to legal action based on class grouping. Each complaint would be dealt with on an individual basis.

All other costs of arbitration (est. $10,00 per complaint) are payable in advance by the drafting party. These costs are, under California law, unrecoverable. I believe if the deposit is not used in full by the arbitration process, they are entitled to a refund of the unspent money. But if they spend the entire thing and win, they can't recover their costs. The non-drafting party bears no financial liability beyond that initial one time payment of $250.

Patreon has already arguably violated its own contract by grouping the 72 plaintiffs into a class for the purpose of requesting emergency injunction against these arbitration requests. They should, by the terms of their own contract, have filed 72 separate motions for emergency injunctive relief.

It doesn't matter whether the arbitrations are decided in Patreon's favor. Their own contract requires that they address each complaint individually, and win or lose, foot the bill for the arbitration. 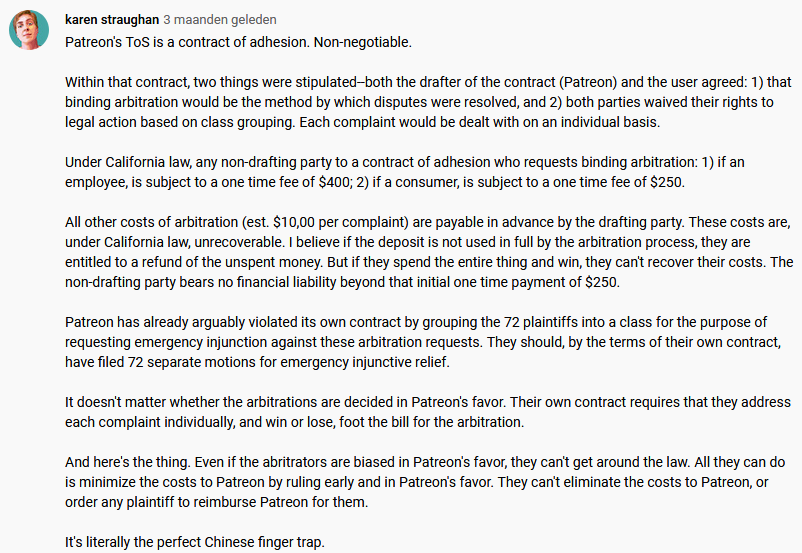 All of this seems believable enough, but I know better then to take a legal argument made in a YouTube comment at face value. Hence my questions here:

This is the earliest dispute resolution clause I can find for Patreon. Some points to note:

As stated above, Patreon can ask that the arbitrations be consolidated. I see no reason why the request wouldn’t be granted. That way they only pay for one.

Alternatively, they can simply pay out their maximum liability if that is less than the expected costs. For many users, it’s likely the commissions they have paid will be less than their $250 filing fee.

There are no precedents set in arbitration so each has to be decided individually. However, it’s likely there will be only one arbitration, see above.

Well, it depends if they are insured or not.

If they are insured for legal costs then the question is how much to damage their insurer. And the answer is - a lot. Patreon has revenues in the tens of millions - insurance companies work in the billions.

If they aren’t insured, there would need to be a significant number (far more than 72).

Realistically, this is little more than a minor inconvenience.

A request to arbitrate can be challenged in court on a number of grounds. In this case, there is a legitimate argument, apparently raised in a court, that fans are not entitled to invoke an arbitration clause to compel arbitration related to a dispute between Patreon and a third-party. The existence of an arbitration agreement that is applicable to the dispute described in the arbitration complaint is a threshold question that can be determined by a court prior to commencement of arbitration.

If Patreon prevails in court, or if it is compelled to arbitrate and the arbitrator rules in its favor on the ground that the fans lack standing to pursue the dispute, then the arbitrator can award attorneys fees and costs against the fans in all likelihood.

Creating a kink in the works in exchange for near certain liability for thousands of dollars per filing fine is no small thing for the fan. This is probably why only 72 such complaints have been filed, which certainly wouldn't bankrupt Patreon.

So, this is not an effective tactic and is likely to backfire on the fans attempting it.

6
What can be the consequences of indemnification clauses in online terms of use?
0
How does one supreme court case set the standard for all following cases?
3
Wag! Terms of Service
2
Requested to remove YouTube embeds?
0
Does a SaaS needs to offer a license grant?
1
If a company fails to abide by its own arbitration agreement, does that invalidate the agreement?
0
Can a consumer arbitration agreement be applied retroactively?
0
What are the trade-offs involved in accepting an offer to contract that would combine an installment payment and service fee?