Am I liable for a school zone speeding ticket in New York State when blinking lights don't have a notice sign?

Long story short, I have received six citations for speeding in a school zone posted 15 MPH. I received my first citation in the mail two weeks after the event occurred, thus, I racked up six tickets before realizing I was doing so.

The school zone speeding sign looks like the attached image. I apologize for it being blurry, but the sign reads: "School Speed Limit 15: 7AM - 4PM School Days" It is also attached with lights that flash. 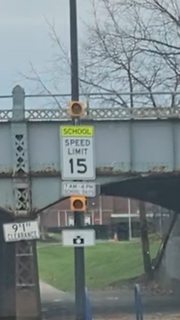 ...no person shall drive in excess of such maximum school speed limits during:

1.) school days at times indicated on the school zone speed limit sign, provided, however, that such times shall be between the hours of seven o'clock A.M. and six o'clock P.M. or alternative times within such hours; or

2.) a period when the beacons attached to the school zone speed limit sign are flashing and such sign is equipped with a notice that indicates that the school zone speed limit is in effect when such beacons are flashing, provided, however, that such beacons shall only flash during student activities at the school and up to thirty minutes immediately before and up to thirty minutes immediately after such student activities.

I am trying to question whether or not the lights were flashing when I was flashed by the ticketing camera, and I'm wondering if this is a reasonable thing to question based on the law I attached and the image.

Various links to the NYS Laws are here and here.

This clearly meets the first criteria:

1.) school days at times indicated on the school zone speed limit sign, provided, however, that such times shall be between the hours of seven o'clock A.M. and six o'clock P.M...

The times are clearly listed on the sign and are within the allowed times (assuming the sign isn't blurry in real-lfe of course). Whether the lights were blinking or not is moot.

Part 2 says beacons are for "student activities at the school" and implies outside the regular hours, because if it is within the regular hours then part 1 covers it. Say there is a dance or game at 6:30 pm, they can have the public safety authorities activate the lights. You are correct that if you got the ticket outside the posted hours (7a-4p), but when the lights were flashing that you would have a beef- because this particular sign does not have a notice that says speed limit is in effect when the lights are flashing. If it had such notice and the lights were flashing, then you would be out of luck based on part 2.

It is always in effect 7-4 on school days, lights or no lights, based on part 1 and the sign that states the hours (which are within the hours listed in the law). You don't need to memorize the school calendar, just assume it is Monday-Friday but not obvious days like Dec. 25.

Not the answer you're looking for? Browse other questions tagged traffic speeding citations or ask your own question.

1
What happens if I don't pay a speeding ticket from New Mexico?
2
Is a police car parked perpendicular to the road (with flashing lights) sufficient by itself to legally establish road closure to all traffic?
1
Is There a Legal Distance to Slow Down After Passing a Speed Limit Sign of a Lower Speed? [MA]