Say prosecution has a witness who saw the defendant do the crime and is happy to testify it on the stand.

But when they take the stand, they suddenly surprise the prosecution by saying they did not see anything (thereby effectively commiting perjury). They may do it because the defendant has threatened them, or offered money, or whatever. A famous (though not real) example is Frank Pentangeli suddenly saying at the trial that he knows nothing about Michael Corleone's family (crime organization) in The Godfather Part II: 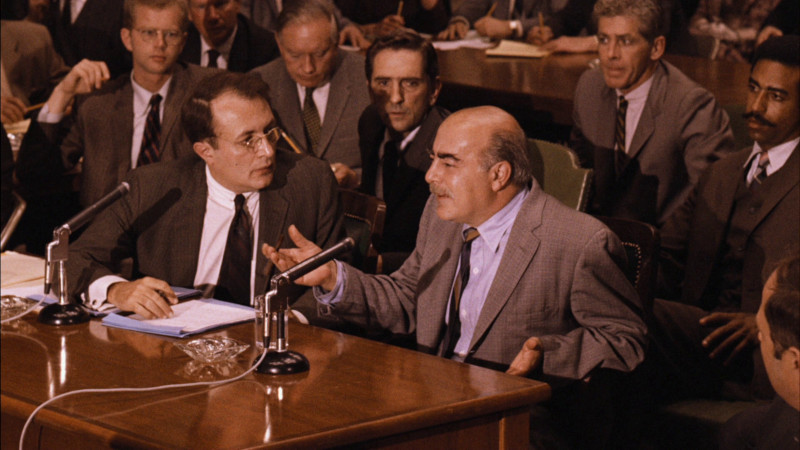 In modern criminal courts, what can the prosecution do to fix that? Can they ask the court to adjourn the trial, talk some sense into the witness and have them on the stand again to tell the truth? If so, can the prosecution just carry on with other witnesses and simply bring the liar on the stand again another day, or does it necessarily need to advise the court immediately of what has happened and request an adjournment?

In U.S. practice, double jeopardy protections attach once the jury is seated and this scenario contemplates the change in position arising at trial.

A mistrial could be called, or a continuance obtained, if the defendant suddenly claimed an alibi defense, since that amounts of a defendant waiver of double jeopardy protections. But without proof that the witness was tampered with, obtained at the last moment, it can be difficult or impossible to get proof of tampering or to contradict the story with other evidence to undermine the credibility of the witness.

The prosecution would probably request a recess in the trial to regroup and try to admit evidence that the testimony changing witness made a prior inconsistent statement to impeach the testimony of that witness, from whomever that witness told the first time (probably a law enforcement officer). But this is still far less convincing to a jury than an affirmative statement from a witnesses about a key fact.

If the prosecution could find evidence of defense side tampering and present it to the judge in the hours or small number of days before the trial ends, it might be able to get a mistrial declared. But it is much harder to get a mistrial for witness tampering when the witness shows up and testifies contrary to prosecution expectations than it is when the witness is, for example, killed or kidnapped and doesn't appear to testify at trial at all.

But if evidence of neither type could be obtained before the jury was sent to deliberate and evidence was closed, and the jury then acquitted the defendant, it would be very hard for the prosecution to change this result. Perhaps not completely impossible, but very nearly so.

The witness could be (and in this circumstance, despite the extreme rarity of perjury prosecutions, probably would be) prosecuted for perjury, but that wouldn't change the acquittal.

If a link to the defendant could be found, the defendant could also be prosecuted for witness tampering or obstruction of justice or something similar. But that is hard to prove (and the witness would probably have to be convicted or provided with use immunity for his testimony) to do so.

In English criminal law practice, in contrast, the likelihood of having the verdict of acquittal set aside and getting a new trial would be much greater (and the likelihood of getting a recess mid-trial would be greater in far more common bench trials in lower level criminal cases), but it would still be a serious burden for the prosecution that it might not be able to overcome.

Lawyers aren't entitled to expect that witnesses will testify exactly the way that they discussed things with the lawyers before trial, and this can be explained away with a variety of excuses that are usually true ("after thinking it over after meeting with you, I realized that I was confused and getting it wrong"), but are sometimes a cover for a change of story that is not sincere.

I've had similar things happen a few times in civil litigation and there is only so much you can do about it.

Not the answer you're looking for? Browse other questions tagged rules-of-court trial witnesses criminal-procedure perjury or ask your own question.

8
Can someone compelled to testify intentionally ruin the credibility of their testimony so long as they don't perjure themselves?
1
Is answering a question you are not sure about under oath perjury?
8
Can a lawyer subject the court to a (temporarily) ruse for a legitimate purpose?
3
Can defense request findings of fact before resting?
3
What protection against a perjury prosecution does a hostile witness have?
10
Can I surprise the prosecution with an alibi defense at trial?
4
Defendant's right to surprise prosecution at trial
9
How do prosecutors prepare to cross-examine defendants?
1
Does a witness admit perjury by testifying a different story on retrial?