There is a post floating around on Facebook that "quotes" the Supreme Court's ruling in Ex parte Milligan, 71 U.S. 2 (1866): 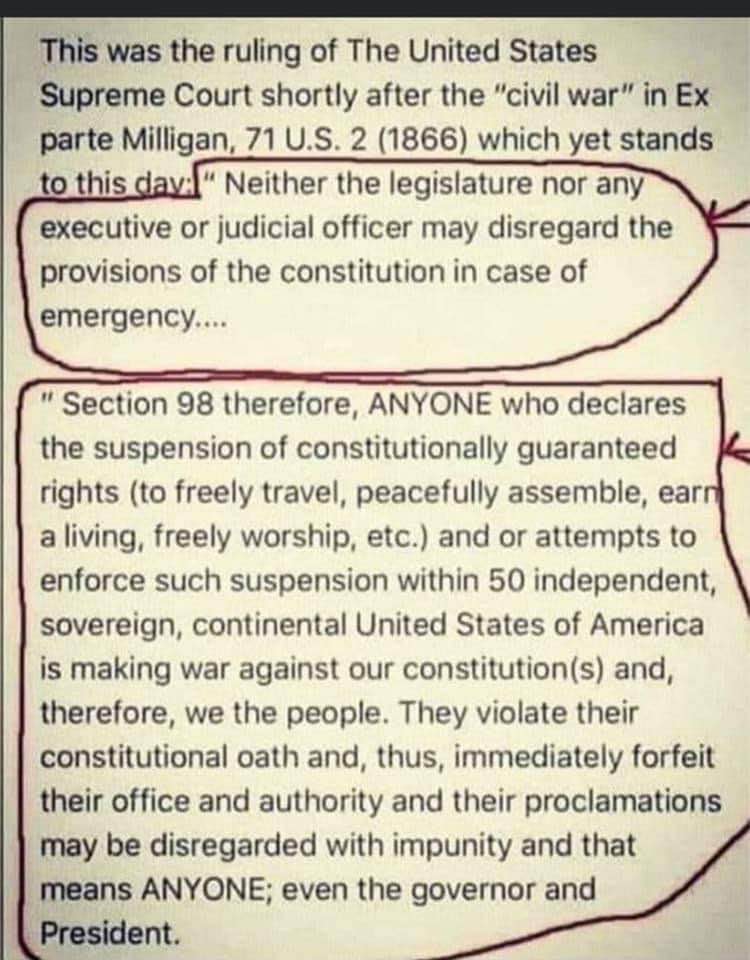 I'm certain that the author's interpretation of the ruling is strained (at best), but is there any validity to this interpretation? Does this ruling make something like a "mask mandate" unconstitutional?

Let’s look at the full paragraph

Neither the President nor Congress nor the Judiciary can disturb any one of the safeguards of civil liberty incorporated into the Constitution except so far as the right is given to suspend in certain cases the privilege of the writ of habeas corpus.

So what it actually says is: you can’t unless you can.

The Constitution says this to say about habeas corpus:

The privilege of the Writ of Habeas Corpus shall not be suspended, unless when in Cases of Rebellion or Invasion the public Safety may require it.

The case decided that military commissions (and the denial of habeas corpus) were constitutional where there was no civilian court available. Because Indiana had never been in rebellion and civil courts continued to function there, military tribunals could not be used. However, they could be uses in states that had been in rebellion.

You can’t unless you can.

This is specifically about rights guaranteed in the Constitution

In this particular case, the right of habeas corpus.

There is no equivalent right applicable to face masks so a law mandating them in certain circumstances does no more infringe a Constitutional right than mandating the wearing of clothes in public.

You can’t unless you can.

Breaking the law doesn’t cause you to lose your job

The second quote, the origin of which is unknown and definitely not in the case, is total fantasy.

Even if a law against face masks was unconstitutional, the authors of that law have overreached and the remedy is to go to a court to have it declared unconstitutional. They don’t lose their jobs as a result.

Even if they wrote the law with criminal intent, they must be removed from office in accordance with the normal procedures such as impeachment for the President, by a two-thirds majority vote of their house for a Congressperson etc.

Not the answer you're looking for? Browse other questions tagged united-states constitutional-law us-supreme-court interpretation or ask your own question.

7
Can Social Media Reviews Be Considered Defamation?
17
How is it constitutional to require defendants to pay for counsel?
6
What Supreme Court cases, other than Nixon v. United States, have directly applied or interpreted U.S. Const. Art. I, Section 3, Clause 6?
3
Mootness as a strategy to maintain unconstitutional regulations
2
What authority (or authorities) have established the status of State ratifications of U.S. Constitutional amendments?
12
Is there any judicial precedent regarding US governors' power (or lack thereof) to limit church attendance in an emergency?
3
What does COVID-19 have to do with Live Audio at SCOTUS
4
What standing does one state have to determine if another state(s)' implementation of their own constitution violates the federal constitution?
0
Are there laws protecting borrowers from predatory practices in early loan payoff
4
Does the U.S. Supreme Court have jurisdiction over the constitutionality of an impeachment?