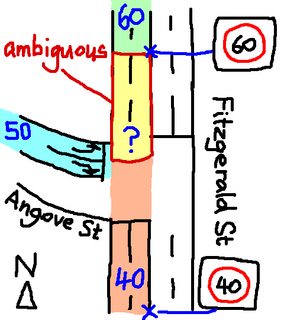 What is the speed limit along the "ambiguous portion" (yellow) of Fitzgerald St northbound, that is, the 30-metre portion of Fitzgerald St from the left-turning lane of Angove St up to the 60-sign?

In practice it is unlikely that Bob, after completing the left turn, could actually manage to accelerate to a speed greater than 40 km/h within the 20-metre ambiguous portion up to the 60-sign. But it seems that the speed limit in the ambiguous portion is ill-defined, meaning that Alice (going straight ahead) might be able to get away with doing 50 km/h or 60 km/h.

(2) A person must not drive a vehicle in a built‑up area, at a speed exceeding 50 km/h, except within a speed zone in which a higher speed is permitted.
Points and modified penalty: see regulation 17.

The fact that Bob may be legitimately unaware that this is the speed limit doesn’t matter either.

If you want to ask if Bob has a defence if issued with an infringement notice, please feel free to post a new question.