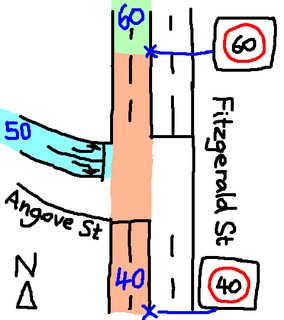 Dale M's answer to the original question establishes that:

Now suppose that Bob approaches on Angove St and turns left into Fitzgerald St northbound. Bob knows nothing about the earlier 40-sign, but sees only the 60-sign, and concludes either: 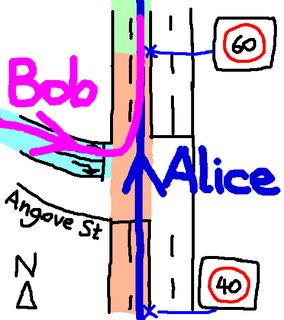 Therefore, after completing the left turn, Bob drives through the final 20 metres of the 40-zone believing that it is either a 60-zone or a 50-zone. (Yes this is difficult, but I think just doable with a powerful car by starting with a wide left turn into right lane at 35 km/h.)

Does Bob have a valid defence if issued with a speeding infringement?

If yes, suppose that Alice drives along Fitzgerald St northbound, straight through the intersection, clocking a speed of 60 km/h within the final 20 metres of the 40-zone.

Would infringing Alice require proving that she did not turn left from Angove St like Bob did?

Bob has no defense

Speeding in western-australia, as it is throughout australia, is a strict liability offense. That means that intention to or knowledge that you are breaking the law is not required. Don’t know the limit? Doesn’t matter, you are still legally obliged to comply.

However, all the way up the chain, from the police officer, through the administrative arm to the judge, each person has discretion to waive the infringement notice. Basically, they can do that if they don’t think it’s “fair” on Bob in the circumstances.

Given that Bob managed to reach 40+km/h within 20m of a more than 90 degree corner I think the infringement notice is very fair. Negligent Driving is possibly the more appropriate offense.

However, it’s possible to imagine circumstances where waiving the infringement notice is fair. For example, if a speed limit sign has been removed or completely obscured by foliage or a parked vehicle and Bob could show he was not familiar with the area.

The question on Alice is, from above, moot.

2
What is the speed limit with only one sign?
1
What actual speed limit applies if a temporary low speed sign is placed on only a high speed express lane?
2
When did the speed limit on this road change?
1
Increased speed limit and decreased speed limit signs located ~1/3 mile apart on opposite side of road. When is it legal to increase speed?
1
Is There a Legal Distance to Slow Down After Passing a Speed Limit Sign of a Lower Speed? [MA]
0
Am I liable for a school zone speeding ticket in New York State when blinking lights don't have a notice sign?
5
Ambiguous speed limit after passing a T-junction