Is the individual right to bear arms disproven by the deleted conscientious objector clause of the 2nd amendment?

As an individual, is the notion that an American has the right to a firearm per the 2nd amendment disproven based on the deleted clause of conscientious objectors?

Proposed by James Madison upon the first draft of the amendment, it read:

“A well regulated militia, composed of the body of the people, being the best security of a free state, the right of the people to keep and bear arms shall not be infringed, but no one religiously scrupulous of bearing arms, shall be compelled to render military service in person.”

If the second amendment was solely referring to the individual rights of a private American citizen, why would there be a mention of “render[ing] military service” in the original draft of the amendment? Doesn’t this imply that the amendment only pertains to the military or collective militias?

No. The intent of the draft was to protect those who objected to bearing arms for religious/moral reasons from being forced by the government to bear arms against their will (essentially making any draft that didn't have consciencious objector allowance from being Constitutional). The line was removed at drafting because it was redundant: The First Amendment protects the free exercise of religion and barrs the government from declaring religious tennents illegal without a very compelling government interest... the government making war was not compelling enough of an interest to force religious pacifists to take up arms for the government... better that the U.S. should suffer military defeat than violate the beliefs in individual liberty.

It does not imply that the 2nd amendment was intended for military purposes, but rather for self-defense purposes (at the time, militia meant the able bodied men of a community who could muster to defend from attackers. While we think of the "Wild West" in terms of the Modern West of the U.S., in 1789 when the Bill of Rights was being drafted, the "Wild West" were the western most parts of the states that we today think of as the "East Coast" the French and Spain/Mexico and the British controlled much of what is West of the Appalachian Mountains today. The "wild west" was closer to home than we tend to think of it and people did live far enough into the wilderness that the "community" that could form the militia might just be the patriarch of the homestead. It was so important that not only did the founders think to make sure that the right to weapons was essential, not only did they draft this having just exited a sucessful war where their troops were just that and an armed rebellion that was even fresher in their mind, the match that ignited the powder keg of the Revolutionary war was the British attempting to sieze weapons from Lexington and Concord that the people in those towns needed for survival. The "Shot Heard 'Round the World" was shot over the right of the colonists to keep and bear arms and the founders were well aware of what they were fighting for.

To further validate the individual right to the people, President Thomas Jefferson, who had a hand in writing the Bill of Rights, when asked about if this allowed a merchant to place cannons on his ship, responded with essentially "That's the reason I wrote the Amendment in the First Place." 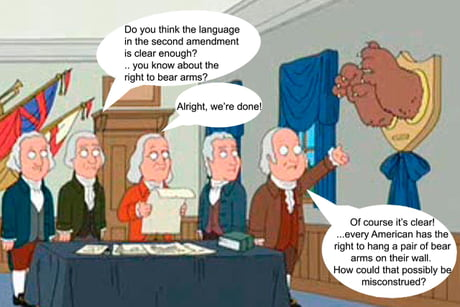 But that's not what it means now

District of Columbia v. Heller, 554 U.S. 570 (2008), was a landmark decision of the US Supreme Court ruling that the Second Amendment protects an individual's right to keep and bear arms, unconnected with service in a militia, for traditionally lawful purposes, such as self-defense within the home, and that the District of Columbia's handgun ban and requirement that lawfully owned rifles and shotguns be kept "unloaded and disassembled or bound by a trigger lock" violated this guarantee.

What the founding fathers meant in the 18th century doesn't matter. What the Supreme Court decided they meant in the 21st does. Unless and until they revisit it, the answer to your question is "no".

In terms of the original meaning: it probably doesn't disprove it

Lots of the amendments include a bunch of vaguely related things. The fifth amendment, for instance, includes grand jury requirements, double jeopardy protections, self-incrimination protections, due process protections, and a requirement that the government compensates people for property it takes from them. The fact that these are all in one amendment (one sentence, even) instead of multiple doesn't affect their meaning.

In terms of the law currently in effect: it definitely doesn't disprove it

The current law in force regarding whether the second amendment grants an individual right to bear arms is District of Columbia v. Heller, which held quite clearly that it does.

Not the answer you're looking for? Browse other questions tagged us-constitution history second-amendment or ask your own question.