In the area commonly known as Gotham, a poor engineer, let's name him John Doe, is forced - under the threat of death and bodily harm on denial - to take part in a small crime of breaking and entering the Ace Chemical Processing Plant. His assailants force him to wear a mask that seriously limits his field of vision. Guards of the plant open fire on John Doe and those that force him to take part at gunpoint.

A person in a bat costume joined the scene during the firefight. We believe this to be the alter Ego of Billionaire Playboy Bruce Wayne. Corroborating testimony by members of the criminal syndicate under the name Justice League is outstanding, but we could not serve the Subpoena.

His mere presence, combined with the death of one of his assaulters, makes poor John Doe jump over a retaining fence into a chemical waste retaining pool that is not covered as standards require, and flushed - against regulations - its contents into the nearby bay.

The chemicals permanently disfigured John Doe. In later analysis, Doctors at Arkham Asylum determined, that the psychoactive substances in the pool most likely aided in destroying his sense of morals and empathy, as well as inducing a love-hate for the costume of Mr. Wayne.

The Jury is to refer to the sepia-colored pages in the documentary "The Killing Joke" and not be handed any full-colored page, as they happen well after the events of this night and have no relevance to this case. A video rendition of the Evidence was created by the defense, but we like to point out this original, undoctored set of photographs that depict the actual incident: 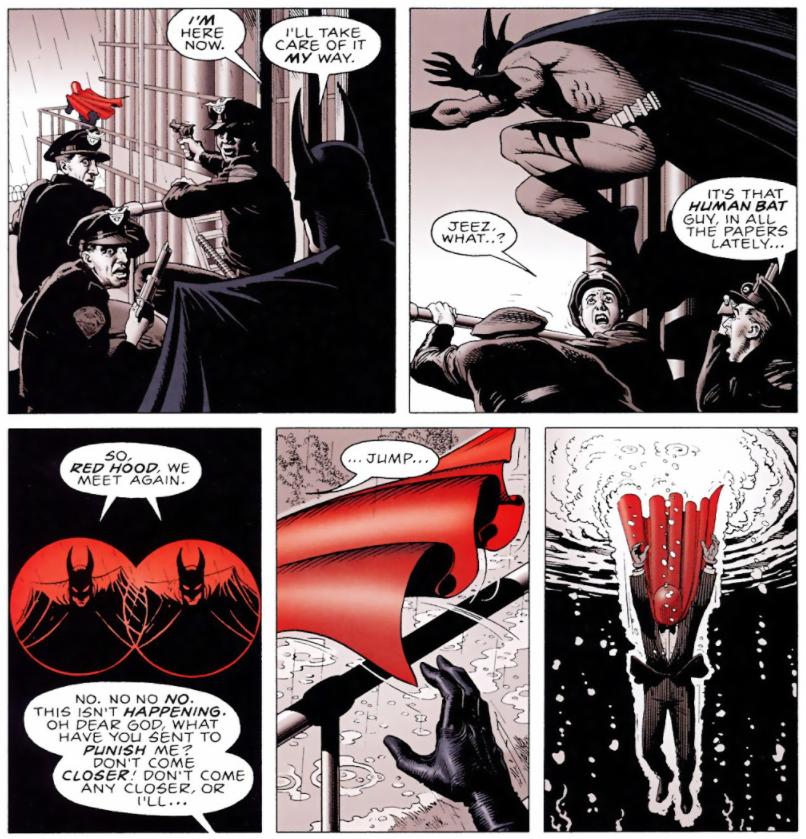 As you clearly see, Mr. Doe, seriously hampered by the attire he was forced to wear and frightened for his life, is doing his due diligence to retreat from the plant, and the accident is the fault of the man in a bat costume we believe to be Bruce Wayne.

Plaintiff concedes that he had no reason to be at Ace Chemical Processing but for the threat of being bodily harmed.

Ace Chemical would be liable to some extent if, and only if, it were found that they were negligent. That the chemical storage retaining pool was not properly covered would be evidence tending to suggest negligence, but the presence of a fence around the pool might tend to weigh against such a finding.

The question of negligence is always highly fact-based, and depends in most cases on what a reasonable person, knowledgeable about the situation, would have done to avoid reasonably foreseeable harm.

The specific events involving John Doe and Bruce Wayne do not seem foreseeable. But some risk of harm from such a noxious chemical pool does seem plausible, and reasonable precautions would be expected.

Not the answer you're looking for? Browse other questions tagged liability new-jersey law-in-fiction or ask your own question.

2
Can I carry this pocket knife in the state of New Jersey?
1
Easement laws in New Jersey, not sure how to proceed
2
Leash laws for service animals in New Jersey
4
Is employer responsible for tree damage to car parked in their lot (New Jersey, USA)?
0
Is surveillance video discoverable in an invasion of privacy case in New Jersey?
5
Is the New Jersey quarantine rule a legal requirement or merely a recommendation?
25
Could New Jersey Really Ban Pennsylvania Drivers?