An answer to a recent question mentions that "all the money you have" is not a valid liquidated-damages clause in a contract.

The main use of "liquidation" that I'm familiar with is in the context of bankruptcy, where it does indeed mean (roughly) "all the money you have". (Well, strictly speaking it means converting all your assets to cash, with the implication that you then give all the money you have your creditors.)

Are these usages of "liquidated"/"liquidation" related? Or more generally, where does the term "liquidated" in "liquidated damages" come from?

This is the sense of the term in which damages are "liquidated" by a liquidated damages term in a contract or statute. The damages are settled by a contractual determine rather than being "unliquidated" (i.e. uncertain or unresolved or undetermined.)

How a word meaning "liquid" came to mean "make clear" when modified is speculative (given what my brief research uncovered), but I think that are some very plausible paths by which that could have happened.

According to Oxford Languages: 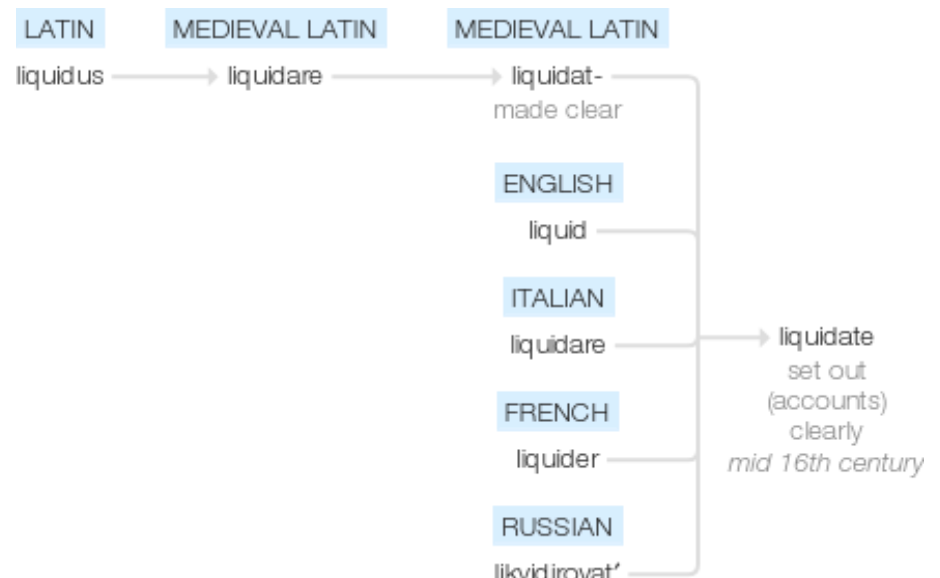 1570s, of accounts, "to reduce to order, to set out clearly" (a sense now obsolete), from Late Latin or Medieval Latin liquidatus, past participle of liquidare "to melt, make liquid, make clear, clarify," from Latin liquidus "fluid, liquid, moist" (see liquid (adj.)). Sense of "clear away" (a debt) first recorded 1755. The meaning "wipe out, kill" is from 1924, possibly from Russian likvidirovat, ultimately from the Latin word. Related: Liquidated; liquidating.

English.StackExchange has some answers of essentially the same question that doesn't shed much more light on the matter but one excerpt is notable:

The meaning is already present in the Latin liquidus which means both "liquid" and "clear, evident".

This obviously comes from liquids being limpid (transparent). Limpid by the way (another Latin cognate, originally from Oscan origin) gives Spanish limpido and limpiar.

Also liquare means "to filter". So that the idea of transparency and purity is already strongly associated with liquids in Latin.

Damages are an award to one party when a (legally recognized and approved) loss or detriment is caused by the action or inactions of another party, by requiring some further action by the second party to compensate the first party.

Liquidation and related words refer to the process of turning assets (usually property of some kind) into their equivalent value in currency, allowing the value to flow like a liquid from one party to another party.

The phrase meanings are definitively linked, in that the adjectival form used in law follows from that used in commerce, and is generalised from one area involving currency to others.

To make clear or plain (something obscure or confused); to render unambiguous; to settle (differences, disputes). {1670}

To determine and apportion by agreement or by litigation; to reduce to order, set out clearly (accounts). {1575}

The adjectival form with the sense "Ascertained and fixed in amount" is found as far back as 1609: these are legal uses of the term. The vagarity in senses is in part due to the various figurative meanings in Latin, where the root means "leave; flow; clear". The ultimate answer would come from studying ancient English legal texts written in Latin.

This is the usage in both liquidated damages (damages stated in cash) and liquidation of a company (the assets are sold and converted to cash).

A liquid asset is one that is or is readily convertible (e.g. shares in a highly traded company, government bonds) to cash.

22
Would a contract to pay a trillion dollars in damages be valid?

10
Has anyone ever won a lawsuit against oneself?
4
Are encryption apps (iOS) exempt from US Export Regulations if released to the US App Store only?
1
Why was the adjective "special" embraced for "special damages"?
5
What does "object to the form" mean?
22
Would a contract to pay a trillion dollars in damages be valid?
0
How can payees (not payors) forfeit a deposit?
2
Claim for damages where store is unable to deliver goods
3
Property vs. Proprietary as adjectives
0
Where does the term common law come from?