Is it legal to carry a child around in a “close to you” child carrier?

While in a car, a child must be in a special seat. When I leave the car must I take the child seat (it’s detachable) with me together with the child. Or is it okay to place child in a “close to me” child carrier (image below). Suppose the child is a 7 pound newborn (10 days old). Is it okay to carry the child in the street and in the hospital inside of this carrier? Or should it be a “car seat” type carrier? 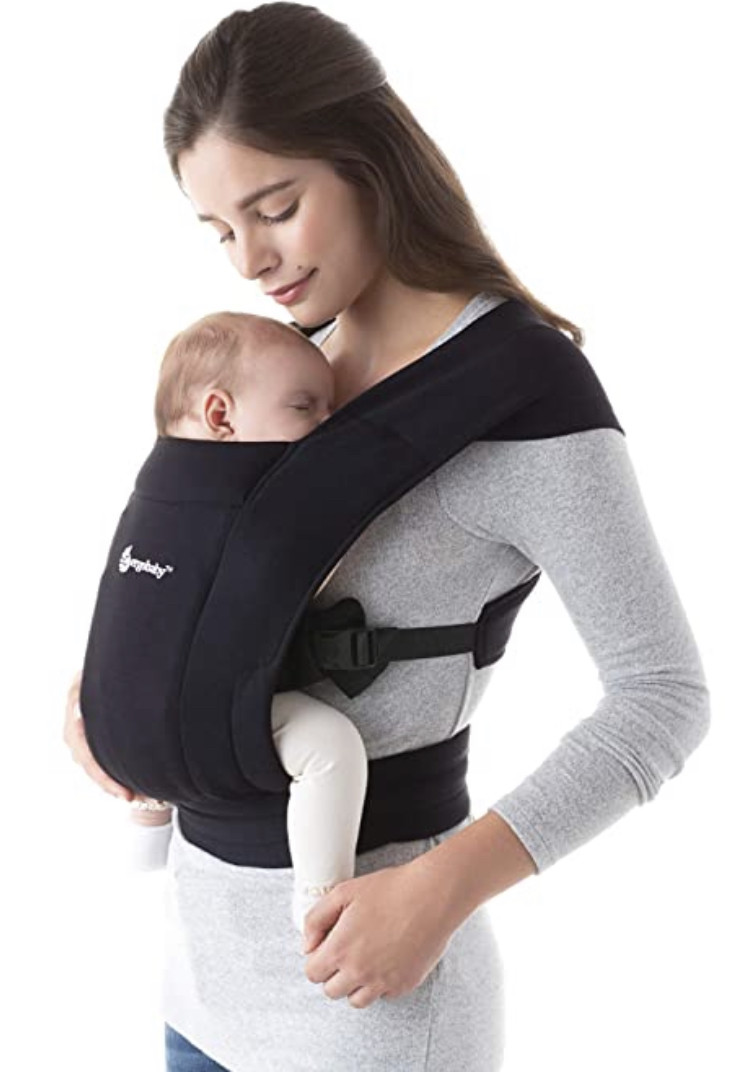 There is no legal reason that you can't carry your baby any way you want outside of your vehicle (as long as you aren't physically harming the child). Baby slings or "baby wearing" is recognized by many pediatric doctors as not just good for the child, but good for the parent too (read more).

Some hospitals (it was this way for my children) won't let you leave the hospital after birth without placing the child in an approved child seat. This is hospital policy though, not law. The purpose here was to verify that you are capable of putting your child in the seat, have the seat restraints positioned correctly, and understand the placement in the vehicle. Improper use can result in injury or death and this is a lot easier to examine in the hospital room than it is in your car.

... in which the hospital determines the patient no longer requires in-hospital care. Hospitals are under extreme scrutiny regarding discharge practices, in part due to racist history of discharging indigent or suspected-nonpaying patients prematurely. Further, they face consderable civil liability for a wrongful discharge.

Discharge planning is a mandatory part of hospital policy

The discharge planning process and the discharge plan must be consistent with the patient's goals for care and his or her treatment preferences, ensure an effective transition of the patient from hospital to post-discharge care, and reduce the factors leading to preventable hospital readmissions.

This requires the hospital to have a discharge plan for mothers which assures the child is going into a safe environment.

This applies to hospitals who want to take part in the Medicare system. That will be every public or government-run hospital, as well as any other hospital unable to survive exclusively on private-insurer patients. Remember, hospitals can't turn away patients who are not stable enough to move or legally discharge, so they are stuck with a great many Medicare patients. Might as well get paid for them rather than try to pursue out-of-network payment from either Medicare or the patient directly.

You could say "Well, the hospital could refuse Medicare business, and tell the government to stuff it." That's true. However, when they find themselves in a malpractice lawsuit with a private patient, the plaintiffs certainly could compare this hospital's "best practices" with those of the industry at large. If the hospital's fell short, that would hurt them badly in the lawsuit. The excuse of "Well, those other hospitals only do that to pursue Medicaid money" would be a very poor sell for the ears of a jury.

So effectively, the Federal government "wags the dog": while it only has the legal reach to set standards for its own vendors, so many are its vendors that it can effectively set the industry standard nonetheless. Of course this isn't cloaked men in a "star chamber" deciding this; these regulations are arrived that in a highly public process. And most people involved in the process are highly favorable toward such policies.

Baby policy is very much part of that discharge planning

As for encouraging mothers to use proper car seats, the University of Maryland public health law attorneys did a brief on the issue. It identifies the issue as "A major public-health imperative". Down on page 8 it says:

Hospitals that fail to provide a certain level of CPS education and support can face liability under state medical malpractice laws and common law principles. Providers of medical care are liable if a patient is injured because of the providers' violation of the standard of care, which varies within each state and for each medical profession, but is generally determined through expert witness testimony on what a typical provider of the same specialty and training would do in the same situation.

That last sentence goes back to what I said about Medicaid "wagging the dog" by defining what typical providers do.

As you very well know, you must use a proper child safety seat. As I show above, the hospital has a duty to assure they are releasing the child into a safe situation. So it is entirely reasonable for them to ask, and you must put up with this. However, the hospital is not entitled to "make up" requirements where state law or other competent body has already defined them... so if state law, Underwriter's Laboratories (a nonprofit), NHSTA, etc. defines what a proper safety seat is (or APTA defines what safe baby travel on public transit is), that's the last word.

There is no scenario here where you get to leave in an automobile without a proper safety seat. If you're in a transit-rich city where a carless mom and "going home on the Metro" is a likely scenario, they should be satiated by showing them your transit pass and that you are equipped with whatever transit agencies require for that use.

If push comes to shove, they can't hold your child hostage - but if you're down to pushing and shoving, they could pull a CPS (Child Protective Services) officer into the conversation, "merely in a consulting capacity, of course". The hospital will do whatever CPS tells them to do. As will you.

Not the answer you're looking for? Browse other questions tagged united-states child or ask your own question.

6
"Evading" police car (with lights on) before it turns around to follow you
3
Is it legal to ride a bicycle with a self-installed motor around California?
33
Does being engaged (to be married) carry any legal significance?
0
What does the phrase "or anyone close to you" mean in juror questionnaires
2
Are there any laws around viewing the messages of the members of a site you own?
1
Can you hire attorney to obtain birth certificate for your child if you are out of country?
2
Are you vicariously liable to someone you hired to carry out a negligent act?