What happens if the debtor in a bankruptcy proceeding cannot afford to stay in bankruptcy?

Imagine a U.S. debtor in Chapter 11 bankruptcy, operating as a "debtor in possession". At the beginning of the case they have $10 million in the bank.

During the case, they have to pay their own lawyers, and the lawyers for various creditor committees. Let's say they were hoping to end the case in 8 months, but they're spending $1 million a month for their own and other parties' lawyers and professionals, and negotiations with and between creditors are taking longer than expected. At ten months into the case, they literally have $0 in the bank.

What are the debtor's options at that point? And what are the options of any creditors, and of the lawyers that represent the parties, and of professionals working for all of them?

Can the debtor start paying its legal fees with IOUs?

What other ways could the case change in response to such a condition?

If a Chapter 11 bankruptcy cannot continue to be prosecuted, it can be converted to a Chapter 7 bankruptcy proceeding (something that is not uncommon and mocking and colloquially called a "Chapter 18").

The "zero dollars in the bank" concept also has some flaws.

Once an attorney files something as a lawyer for a client in a court case, that lawyer has to continue representing the client even if the lawyer isn't getting paid until the court gives the lawyer permission to withdraw from the representation. While requests to withdraw are usually granted in the end, permission is not automatic, and it wouldn't be unusual for a court to insist that a lawyer remain in a case until it is it is in stabilized condition to prevent undue prejudice to the client.

Also, amounts necessary to pay lawyers and other professionals to conduct the bankruptcy case itself are what is called "administrative expenses" and have priority over all other claims but alimony and child support (which usually aren't present in a Chapter 11 anyway). And, lawyers can usually be paid in a bankruptcy at all only when and in the amounts approved by court order. Lawyers in a Chapter 11 case can't count on being paid as fees are incurred and indeed, usually receive a significant share of their total compensation at the end of the case.

If the problem is lack of liquidity, rather than lack of assets sufficient to pay them (which is common in businesses with large fixed assets such as malls and manufacturing companies), the lawyers simply run up their tab and submit regular invoices and administrative expense claims and wait until there is liquidity to get a court order authorizing the payment.

Overall the legal fees are often quite significant. In a recent Chapter 7 bankruptcy of a medium sized closely held business that I analyzed, which was very typical of that kind of case, administrative expenses were 35% total assets of the estate, and a Chapter 7 usually has smaller fees than a Chapter 11. 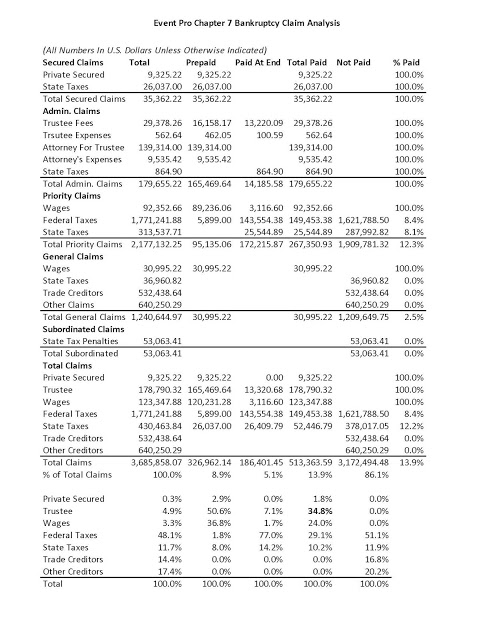 Not the answer you're looking for? Browse other questions tagged united-states bankruptcy or ask your own question.

3
What are the rights of the creditors of "nondischargeable" debts after a bankruptcy?
0
Can my wife as a bankrupt's partner ask for trusties costs in bankruptcy to be assessed? And what are those questions to ask?
1
If the damages from a lawsuit force the defendant into bankruptcy, are they forgiven?
1
Corporation files ch. 7 but wholly-owned subsidiary LLC does not file - how does this happen?
3
how can a creditor prepare for someone's bankruptcy?
0
Would a Notice of Entry of Appearance be required in federal bankruptcy case going pro se?
0
What happens to debt during a Ch 11 bankruptcy?