The national identity card is an official document which allows any citizen to prove their identity and, under certain conditions, their French nationality.

Example of a French ID card: 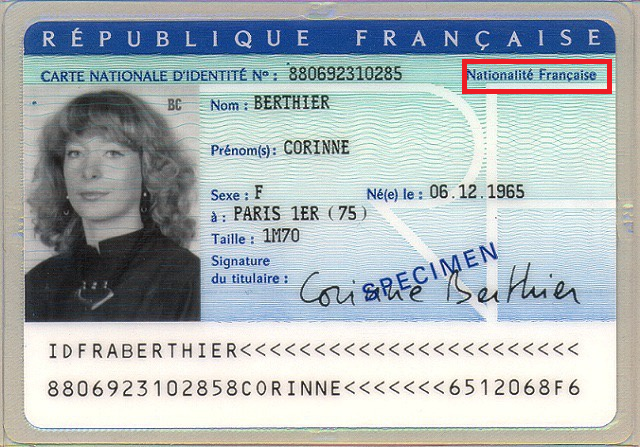 The content of the red rectangle means "French citizenship".

The only condition is that the document must be within its validity period for the purpose of proving citizenship, which includes the validity written on the document but can go beyond it. There's also an implicit condition that the document must not have been revoked (because it was declared stolen, or because it was found to have been obtained fraudulently): if it's been revoked, it's deemed not to exist anymore. An additional subtlety is that French law cannot dictate what other countries consider to be sufficient evidence of French citizenship.

The wording on the website of the embassy in Thailand is strange and I couldn't find similar wording elsewhere. For example, the general consulate in Buenos Aires states

i.e. ”the national identity card is an official document which allows any citizen to prove their identity and their French nationality“.

The relevant law when you need to prove your French citizenship to a French government service is article R113-5 of the Code des relations entre le public et l'administration (code governing interactions between French government services and the public). It states that a “carte nationale d'identité en cours de validité” (identity card within its validity period) is sufficient proof of identity and citizenship. An official government website states that the document remains valid as a proof of citizenship for 5 years after its expiration date. I can't find the law that codifies this (for the specific case of renewing an identity card, it's in article 4-1 of decree 55-1397, and for the deliverance of a passport, in article 5 of decree 2005-1726).

My understanding is that this law does not cover border crossings. I could not find the French laws that cover crossing a French border as a French citizen.

A number of countries, including all European Union and Schengen Area countries, accept French identity cards as a proof of French citizenship, granting the right to cross their borders. These documents are listed in the Public Register of Authentic identity and travel Documents Online. The entries for French identity cards do not mention any conditions other than the validity period.

Not the answer you're looking for? Browse other questions tagged citizenship france identification or ask your own question.

9
What happens to an individual who is deported to a country of which they are not a citizen?
4
If I was granted citizenship but my wife was not, will my daughter also become a citizen?
2
Could one become stateless by first renouncing one's native citizenship, and then having one's naturalization revoked?
1
Can a U.S. citizen who renounced his citizenship, get a green card through his American wife?
3
What is the legal standard of proof required for US citizenship?
1
Can I get my citizenship without physical green card
0
Is a passport proof or presumption of citizenship?
0
Citizenship revocation leading to statelessness possible while there's a gateway to one's ethnic country's citizenship through descent?