Refusal to Transfer Ownership of Laptop

I have purchased a laptop, but the company from which I bought it is refusing to officially transfer the ownership. It's a Dell laptop and Dell have a form for transferring ownership. I am based in the UK, but bought this will the UK was in the EU.

My question is simple.

Can a seller legally refuse to transfer ownership of a laptop?

If they are legally required to but still refuse, what recourse do I have?

I still have the receipt from the laptop and the company does not dispute the fact that I bought the exact machine from them.

According to Dell, the laptop is still not registered to me. As such, they are refusing to service it under its warranty. They do not accept my receipt as evidence. I guess this is fair from their point of view: it doesn't say the service tag, so it really could be any laptop of that model.

Extra details. It is a company who have their own website but also trade on eBay, not a private seller; they still trade both on eBay and their website. They are simply saying that they do not transfer ownership. They claim that this was in their listing on eBay, but I have no recollection of this---and likely would not have bought if I had seen it, since it sounds super dodgy---and the eBay listing no longer exists. Further, they claim that the transfer is not necesssary since Dell will service without this. I have not found this to be the case, nor have many others; see below.

Specific pointers to UK law would be appreciated, rather than general references. I'd like to go back to the company armed with facts, not merely opinions, as well-informed as those may be.

I hope that this question will be helpful for others. It appears that proof of ownership is a big issue for Dell laptops. See the image at the end of the question, arising from a search for refusal to transfer ownership laptop, for evidence of this! 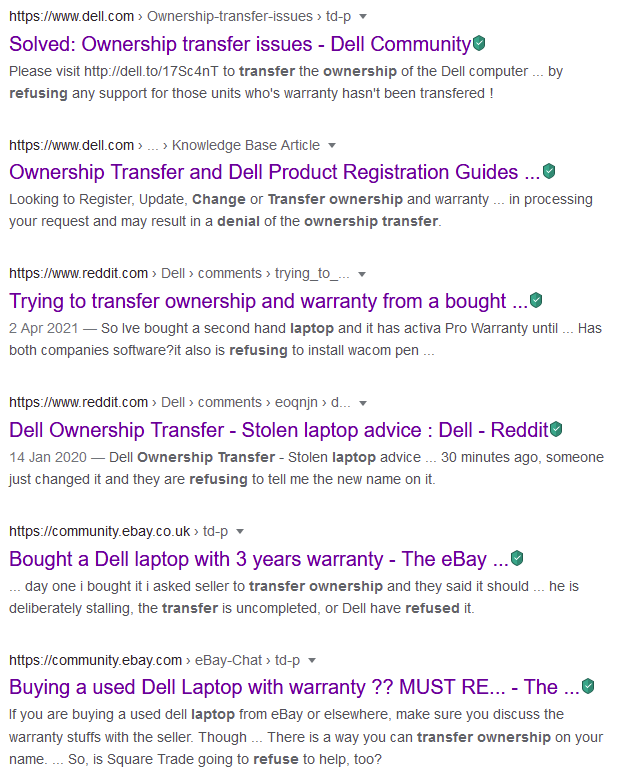 You have no relationship with Dell.

You bought the laptop from the seller. I am not intimately familiar with UK Law, but assuming they implemented EU directives correctly while they were still in the EU, then you have a 2-year warranty from the seller for any defects that existed at the time of sale. (Where a defect is defined as anything that makes the laptop not fit for its agreed-upon purpose if you defined a specific purpose in the contract, its advertised purpose if the seller advertised it, or the purpose that a reasonable member of the public would commonly expect, if nothing was advertised.) Furthermore, during the first 6 months, there is a reversal of the burden of proof, where the seller has to prove that the defect did not yet exist at the time of sale – as a general rule in civil law, the person making a claim (in this case, you would be the one claiming that the defect existed at the time of sale) has the burden of proof, so after 6 months, the burden of proof is on you.

Note that warranty entitles you only to repair or replacement, but not return.

You can buy warranty from anyone you want. E.g., for my bike, I bought a warranty from a third party, neither the seller nor the manufacturer. In your case, you didn't buy any warranty, but obviously you still have the default warranty by the seller.

0
Drafting for unofficial startup ownership
1
Author ownership of e-books
1
Whose is the ownership of a device bought by one party and reimbursed by another?
23
What might be illegal about a company using deceptive phone calls to establish a contract and seeking payments under it?
1
Can the warranty on a laptop be transferred to a new owner?
0
How does legal ownership work with second hand goods, e.g. sold on ebay / Facebook Marketplace?
0
In civil claims is there any requirment for the claimant to prove ownership of assets in question?
1
Can installing Linux on a computer void its warranty for a hardware problem that is obviously entirely unrelated to software?
6
May I add additional lyrics to a copyright song without claiming any ownership?