I have been reading Ontario's official driver's handbook and the section on bike lanes was particularly uninformative. First off, you are not supposed to drive in bike lanes, that is straightforward and obvious. But, the text states that for right turns you not only turn through the bike lane but you should be in it to turn right, as if it were the right lane. If there were no bike lanes you would be expected to get over far in advance, but you are never supposed to drive on the bike lane, so I am not sure how far in advance I am supposed to pull into one, when I want to turn right. Also, it just seems very strange, having to change lanes at the last instant, and hoping your spot does not fill up with bikes, seems like turning right with a bike lane would be a very hit and miss situation.

Also, what if I cannot or forget? If I am not in the bike lane, is it illegal to then turn right?

This is more of an answer from experience, but isn't necessarily a legal answer. During the summer months, I would bike to school, which is around an 11k distance. There's been some... interesting drivers, but I've figured out a good bit.

From the online handbook, I got this:

Sometimes you will need to enter or cross a bike lane to turn right at a corner or driveway. (See Diagram 2-12) Take extra care when you do this. Enter the bike lane only after ensuring that you can do so safely, and then make the turn.

To help you, here's a good image of a bike lane: 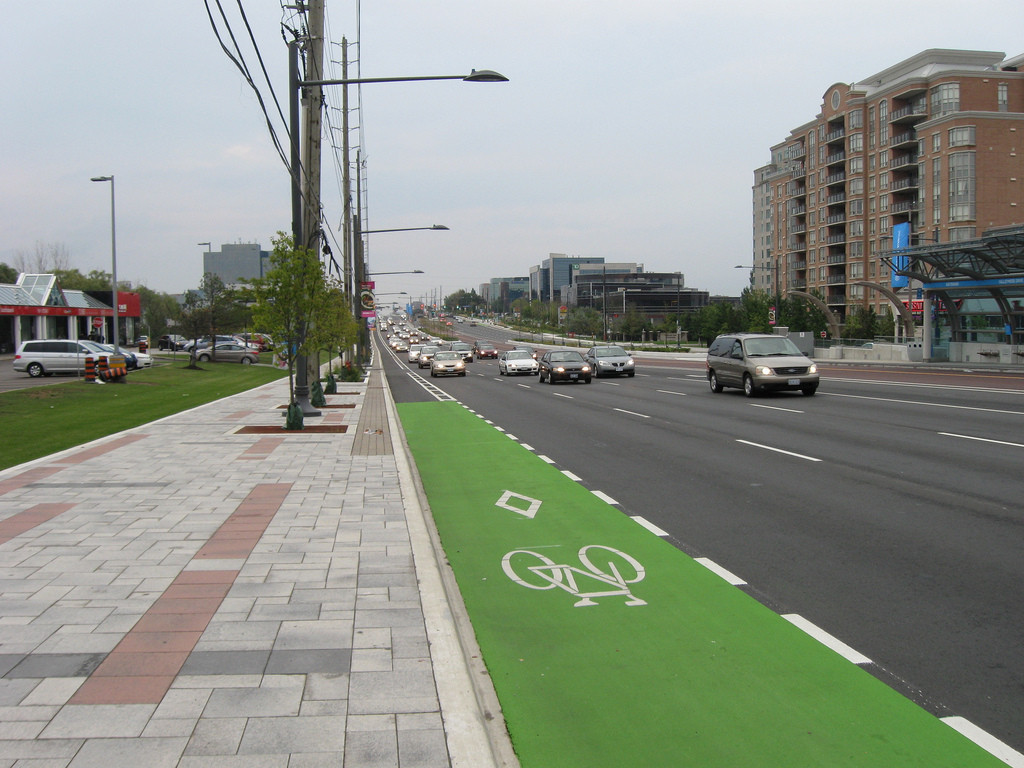 Generally, as a road nears an intersection, the line separating the bike lane from the road lanes will become dotted, signalling to cyclists and cars that they may enter the lane to turn. This is a good indicator: you've got a good distance to slow down, and prepare for the turn.

Not all bike lanes have the luxury of a big green box to help, so the decision is effectively yours as a driver. Check your mirrors and your blind spot before slowing down. Remember to signal: as a cyclist, this is the scariest thing for me. Riding through in a bike lane to find a car turning in front of me without having signalled. This is probably the most important part: making sure that you know the cyclist's intentions, and that the cyclist knows yours.

If you do not enter the bike lane before your turn, for whatever reason, it is a violation to make the right turn across the bike lane.

The bike lane is a lane. I am frustrated that I cannot find a definition of lane in the Highway Traffic Act but I did find in the Toronto municipal code:

So if bicycle lanes are lanes, and you must be in the rightmost lane to turn right, then you need to be in the bike lane. It is definitely confusing and perhaps impossible sometimes!

In the US the typical rule is the as you've described - cars, yielding to approaching bicycles, move into the bike lane to make right turns. As you've intimated in your hypothetical, it causes all sorts of problems.

Even better is these biker boxes that they are painting in some places. These things are not even defined in the laws or the driver handbooks! So they are painted on the roads, but can drivers be ticketed for somehow not doing the right thing?

Not the answer you're looking for? Browse other questions tagged canada driving or ask your own question.

3
Right of way between U-turning and Right-turning vehicles at traffic lights
6
"Evading" police car (with lights on) before it turns around to follow you
1
Who has right of way in a lane merge?
0
What is the law regarding left-turns at four way stops?
6
California: Is it okay to use the center left turn lane to merge right?
2
Who's at fault for crashes while changing lanes if the driver who isn't changing lanes speeds-up beforehand?
1
Is it a violation to stop at a light in such a way as to prevent Cyclists from passing (USA)?
0
Can pedestrians enter a marked crosswalk at an angle or cross the street without entering the marked path AND still have right-of-way?
2
Can I right-turn on red if all cars must turn right but bicycles can go straight?