What happens if an AirBnB contract violates the overall Terms of Service?

Under the section "House rules" is the following paragraph:

I will require you to sign a one page contract when you book. Please ask about the contract before booking, because it may lead to you needing to cancel your stay if you don’t wish to sign it. (I will not be canceling on my end for this reason—you must cancel on your end if you don’t wish to sign it if you booked without inquiring about the contract first. You will not receive a refund unless your booking starts several months after your cancellation.)

(As an aside, my belief is that this mention of a contract is hidden away under the house rules in an attempt to defraud renters. But that is not the point of this post.)

I inquired with the host about the contract and they sent me the following. 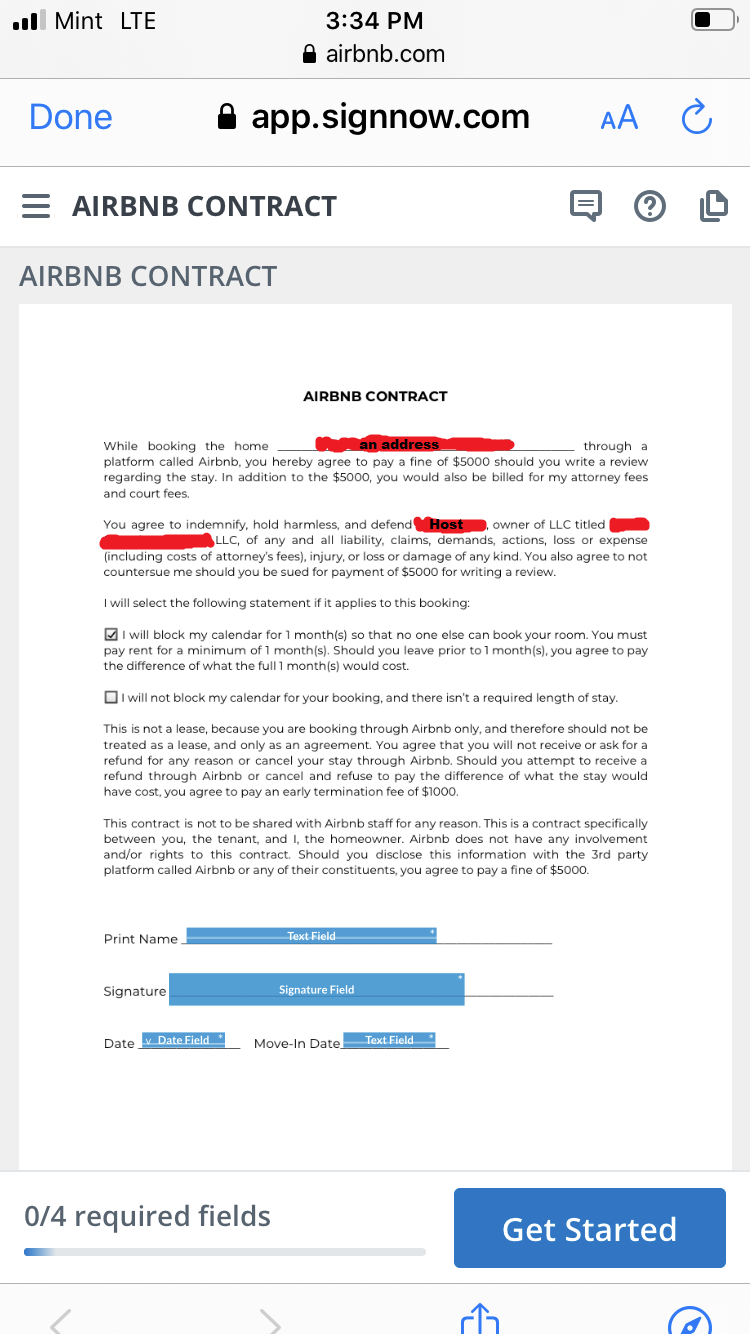 In the Airbnb terms of service, available here, section 5.2, is the following sentence:

Any terms, policies or conditions that you include in any supplemental contract with Guests must: (i) be consistent with these Terms, our Policies, and the information provided in your Listing, and (ii) be prominently disclosed in your Listing description.

The terms in the contract provided were not in the listing, apparently violating bullet point (ii). (I assumed that the terms were some version of the House rules.)

It would appear that the listing does indeed violate the AirBnB ToS provision 5.2 (ii) in that the supplemental contract was not "prominently disclosed in [the] Listing description." Also it seems to violate 5.2 (i) in that it is not consistent with ToS section 9 (Reviews) which says:

After each Host Service, Guests and Hosts will have an opportunity to review each other. Your Review must be accurate and may not contain any discriminatory, offensive, defamatory, or other language that violates our Content Policy or Review Policy. ...

As the supplemental contract quoted denies the guest the right to post a review, it would seem not to be "consistent with these terms".

However, both of those are matters of contract between the host and AirBnB. You are not a party to the host's contract with AirBnB, and cannot enforce its terms. You may complain, but it is up to AirBnB to enforce its contracts, or not, as it may choose.

Incidentally, I suspect that had you signed the supplemental contract, it would not have been enforcable as written. In particular I suspect that the section imposing a $5,000.00 charge for leaving any review would be void as against public policy, and also as a penalty clause. Some other sections might also be void as imposing penalties, which contracts generally may not do. But I have not specifically researched Georgia laws on that issue.

It is not clear to me to what extent AirBnB guarantees to its users who book accommodations that the hosts will comply with the AirBnB ToS. I have not been able to aces the AirBnB cancellation, refund, or review policies, which may be relevant.

Whether you can cancel a charge on your credit card and receive a refund depends on the policy and terms of the card issuer, which are part of your contract with the issuer. Different banks have different terms in this matter. To the best of my understanding, a bank is not legally required to allow a card holder to cancel a charge exception cases of clear fraud.

You might have a claim against the host, for placing conditions on the rental both onerous and not obvious, as well as not in conformance with the ToS, which you reasonably expected to govern the transaction.

Whether you have even a plausible claim against AirBnB I cannot say without looking at the refund and cancellation policies. You might well wish to consult a lawyer on these points before going ahead with any legal action.

You could seek to post a review of the host on the AirBnB site.

I've seen this before and may include some similar on my listings. To book any Airbnb property you must agree to the hosts "House Rules" which may or may not include additional language. As long as it does not violate Florida State law, I am allowed to do this. As an example, our listing allows for up to 4 people to occupy our property, however it is stated in our House Rules that the guest must obtain prior approval before allowing additional guests to remain on the property and that we reserve the right to charge a additional fee per guest. A previous guest violated this policy and with the assistance of AirBnB we evicted them. When they tried to leave a poor review because of our policy (that they violated) Airbnb promptly took it down.

3
UK tenant no contract wants to leave early
1
What can happen if a person violates a website's terms of service?
8
In Contracts, why is some text all in uppercase?
1
Canceling an "email" contract
0
private guest-house owner, can he/she demand more payment which was not agreed upon previously
3
Wag! Terms of Service
0
How are contract terms determined when union contracts contradict?
28
Strange Clause in Employment Contract Concerning Leaving Job