What does this law-excerpt mean?

...means in terms of reference and congent excerpt since I am going to use it in income tax court?

What does it mean as in the the left or right diagram(set/venn diagram) of the attached image- left diagram or the right one?

** I want to prove in court that the right side diagram is the true meaning of section 2(62)- is it possible?** 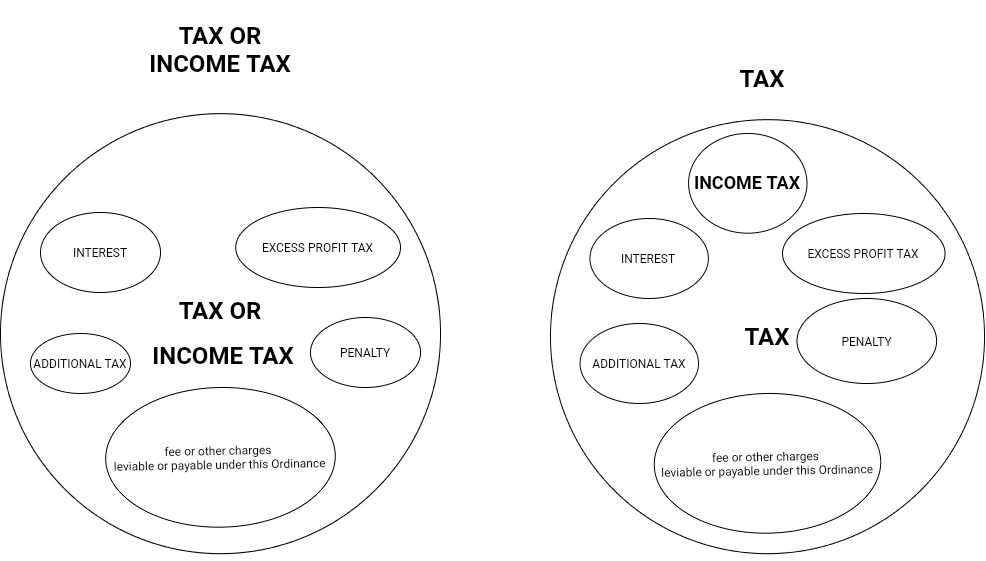 You’ll need to check with a tax professional regarding statutory interpretations of the quote, so this answer is not intended to help with your court case. This answer just deals with the quote as a piece of conversational English.

The plain English sense is that although “tax” admits to a wider interpretation ordinarily (your #2), the word is constrained in the given context to just income tax, together with other things that one might not consider to be taxes (close to your #1).

Unconstrained, “tax” includes consumption taxes, wealth taxes, income taxes and so on. It can be argued that penalties and interest etc are not taxes in the normal sense of the word.

However, within a specific context, it can be more convenient to define the term more narrowly while adding a bunch of related concepts that are included by metonymy.

What does it mean as in the the left or right diagram(set/venn diagram) of the attached image- left diagram or the right one?

The diagram in the left is a more accurate, although incomplete, representation. That being said, the difference between both diagrams is immaterial because some of the statutory definitions involved are circular, redundant, and imprecise.

The statutory definition of "income" "includes (a) any income [...] from whatever source derived". As such, salary constitutes income, yet it does not seem explicitly associated to any of the listed items ("additional tax, excess profit tax, [...]").

The reason for saying that the difference is not material is that taxation of salary might be conceptualized as belonging to "additional tax" or "fee or other charges leviable or payable under this Ordinance". From that standpoint, it is irrelevant whether "tax" and "income tax" are taken as synonyms or "income tax" is to taken as a subset of "tax".

Maybe if you elaborate on the argument(s) you intend to advance in court and/or why you think the difference is material it will be possible to address any remaining confusion.

This is paragraph (62) of section 2 (Definitions, part of Chapter I) of the tax ordinance , linked in the question. It seems to define "tax" as equivalent to ":income tax", and to say that it includes various specific assessments and charges, as well as the tax directly on income. These various charges seem to be specified in Chapter IV (sections 16 through 19E). Section 2(62) simply means tht the word "tax" can be used to refer to the total of these various charges, in this law, for simplicity.

This seems to correspond better to your left-hand diagram.

This definition alone does not indicate what a person does or does not have to pay.

I must agree that it would be wise to consult a professional knowledgeable about this law, before undertaking a legal action in which sizable sums might be at stake. Such a professional might be a lawyer, or a tax accountant, or have some other title.

There are other taxes in Bangladesh, for example, value added taxes and property taxes and fuel taxes and customs duties, that are excluded from the definition of tax as used in this ordinance.

This is done for drafting convenience, so that what is included and excluded in the concept defined as "tax" in the ordinance doesn't have to be reiterated every time the concept is used.

The diagram on the right is closer to the mark than the diagram on the left, since the definition includes "income tax" as well as other amounts within the definition of "tax". But it is still flawed because it doesn't include all of the other things that could plausibly be called taxes that are outside the circle and that are not included in this definition, such as taxes imposed by different laws. In equation form:

Another subtly of the definition is that only includes taxes and charges described in the ordinance that are "leviable or payable", which excludes tax obligations which are accrued but not yet payable.

For example, suppose that your 2020 income taxes were due on May 15, 2021, and you are in disputed with tax officials. As used in the ordinance, the term "taxes" includes your taxes from the 2020 tax year and all prior tax years for which the statute of limitations on collection of those taxes has not expired. But it does not include taxes that will be due in the future for the year 2021 on income that you have already earned in 2021, since those taxes aren't payable yet.

Not the answer you're looking for? Browse other questions tagged tax-law legal-terms definition bangladesh or ask your own question.