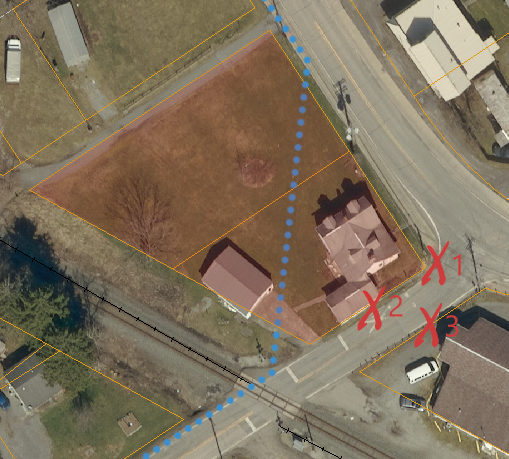 The image above is an aerial view of one of our vacant estates. The area in red depicts our property while the blue dots indicate a path that pedestrians often take to avoid the dangers of X 1-3.

For years, we've not prevented pedestrians from walking through the yard (without permission) to avoid the dangers of walking along the road around the tight corner of the house. However, with the property being vacant and having recently been broken into... we're needing to add some security cameras that we can monitor remotely and are also questioning liability concerns if people were to injure themselves while walking through our property.

We've considered 'No Trespassing' signs, but at the same time we don't wish to make the pedestrians walk the more dangerous path. So...

This is a somewhat complex issue. The presence of "No Trespassing" signs would make anyone who enters the property without a specific invitation a trespasser. So would the presence of a fence, even if there was a closed but unlocked gate. An "Enter at your own risk" sign probably would not make such people legally trespassers.

In West Virginia, a landowner or lessee or other lawful occupant owes a duty of "reasonable care" to invitees and other non-trespassers. No such duty is owed to trespassers. However, the owner or lawful occupant is expected to avoid dangerous conditions and reckless hazards, as well as intentional causes of harm (such as booby-traps). If through recklessness or serious negligance a dangerous condition exists and a person, even a trespasser, is injured or killed because of such a condition, the owner or lawful occupant is likely to be liable. However, if the danger is "open and obvious" or is as well known to the injured person as to the owner or occupant, there is no liability. A warning sign might make a danger "open and obvious".

I do not see that video cameras will be relevant to the matter at all. Cameras do not warn a pedestrian not to enter, nor do they warn of any danger, nor do they prevent a pedestrian from being injured. They may help in detecting or even preventing crime, but will not affect liability for injury to a pedestrian.

§61-3B-3. (Trespass on property other than structure or conveyance.) of the West Virginia Code provides that:

(a) It is an unlawful trespass for any person to knowingly, and without being authorized, licensed or invited, to enter or remain on any property, other than a structure or conveyance, as to which notice against entering or remaining is either given by actual communication to such person or by posting, fencing or cultivation.

§55-7-27. (Liability of possessor of real property for harm to a trespasser.)

(a) A possessor of real property, including an owner, lessee or other lawful occupant, owes no duty of care to a trespasser except in those circumstances where a common-law right-of-action existed as of the effective date of this section, including the duty to refrain from willfully or wantonly causing the trespasser injury.

(b) A possessor of real property may use justifiable force to repel a criminal trespasser as provided by section twenty-two of this article.

(d) The Legislature intends to codify and preserve the common law in West Virginia on the duties owed to trespassers by possessors of real property as of the effective date of this section.

The article "West Virginia Legislature reinstitutes “open and obvious” doctrine" from the law firm Farmer, Cline, & Campbell discusses how the case of Hersch v. E-T Enterprises, Ltd. P’ship. in which a WVa court abolished the "open and obvious" except to liability, imposing dameages for an "open and obvious" hazard, specifically an open stair without guardrails. The legislature then amended §55-7-27. (a) to restore the exception.

West Virginia state law requires property owners remove hazards from their property to reduce the risk of these injuries. The expectation is dependent on the type of person that is on the property. Previously, visitors were broken into one of four categories: invitee, licensee, social guest or trespasser. The duty of care owed to the visitor depended on the category under which the visitor qualified. Today, there are only two categories: trespasser and non-trespasser. The West Virginia Supreme Court, in Mallet v. Pickens, abolished the four categories mentioned above, and held that “landowners or possessors now owe any non-trespassing entrant a duty of reasonable care under the circumstances.”

The article "Property owners may be liable for injuries to trespassers" from the law firm Farmer, Cline, & Campbell reads:

West Virginia homeowners are not obligated to protect those who trespass upon their property. However, they should be aware that they cannot willfully cause injury to any who do trespass. This law can become an issue for homeowners with frequent trespassers as they may find themselves liable for injuries any people, even the uninvited ones, sustain if their properties are left in an unsafe condition.

Most states use three categories to determine whether a duty is owed to individuals who enter the property of another. These three categories are business invitee, licensee, and trespasser. In the past, West Virginia was one of the many states that followed this standard. However, in 1999 West Virginia abolished and replaced the three specific classifications with a new, more general standard of determining whether the individual is a trespasser or a nnon-trespasser

Not the answer you're looking for? Browse other questions tagged united-states liability property west-virginia or ask your own question.

3
Can a would-be visitor be legally a tresspasser?
0
Trespassing conditions on residential property

5
Neighbors trampoline on my property
3
Difference between "Private Property" and "No Tresspassing" signage
0
Liability for neighbor injured on my property
1
Is a contract valid if it releases a party from liability for probable injury?
12
If a stolen item is stolen again, who has the liability?
3
Does a property owner have liability for signs others post in her yard?
11
Liability if someone is hurt on my property
0
Can the state/county post No Trespassing signs for private property?