How willing is the US Supreme Court to declare itself wrong?

In comments on this answer User Suprcat wrote (in part)

I think a big problem is that Marbury v. Madison has been applied in a way that ignores a major caveat: a court's job is to say what the law is, which means that if the court is properly doing its job what the Court says and what the law is will be one and the same, but that will be because a Court that is doing its job will write a decision consistent with the law, not because the law magically changes to match what the Court says. Courts seem to feel a sense of duty to pretend that all previous decisions have been correct, no matter how insanely twisted the law would have to be to fit all past decisions. Much better would be to recognize that Supreme Court decisions might occasionally be wrong, but that would not prevent them from being binding upon the parties involved, or in some cases providing some level of protection from those would rely upon them.

Historically, how willing has the US Supreme Court been to say that its previous decisions were wrong? How willing are US courts to say that previous discussions are right, even if they are inconsistent with current decision? How much of this attitude comes from the Marbury v. Madison case, in which for the first time the US Supreme Court held an act of Congress void as being without Constitutional authority? How does this compare with this attitudes of courts in other common-law countries?

Less than 1% of the time

In my forthcoming book, “Constitutional Precedent in Supreme Court Reasoning,” I point out that from 1789 to 2020 there were 25,544 Supreme Court opinions and judgments after oral arguments. The court has reversed its own constitutional precedents only 145 times – barely one-half of one percent.

However, most of those reversals have been in the last 100 years. Partly this is because you can’t overturn precedent until you have a precedent and you can’t have a precedent until an issue has been litigated for the first time. However, the court is a creature of its time and there has been more social and technological change in the last 100 years than the previous 250 and so more opportunities for historical precedent to fall out of step with community expectations. Because the precedent is arguably wrong more people are willing to argue it and the court is more likely to want to hear those arguments creating more opportunity for the precedent to be overturned or, at the least, narrowed in scope.

This, of course,leads to an issue of semantics. I haven’t read the above book nor all 145 decisions that reversed “constitutional precedents” and certainly not the 25,000+ that didn’t. So:

Building on the fascinating data set shared by user6726, we can see that there are some noticeable patterns in how often the Supreme Court has been willing to reverse prior decisions. Since it's a broad question covering many different eras of American law, it might help add some context.

First, let's start with frequency: is there any pattern to how often the Supreme Court decides to overrule previous decisions? A few things stand out immediately: changes tend to cluster together and the overall rate increased dramatically since WW2. It also seems to coincide with major wars quite often (though that doesn't necessarily mean they are related). 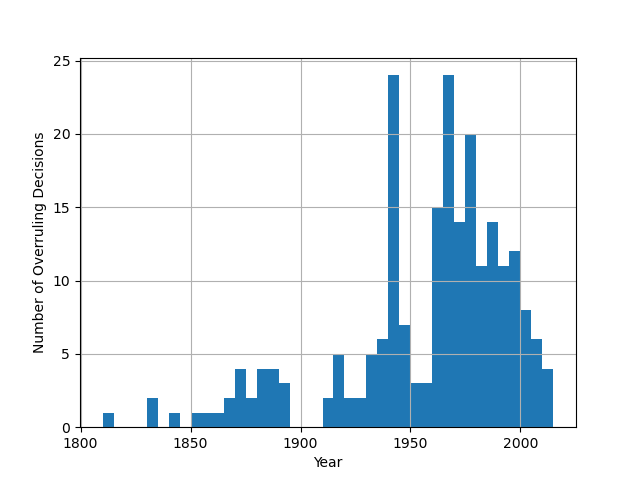 You'll notice that the last 20 years appear to be lower. We can explain this by looking at the distribution of the time gaps - how often are they overruling older decisions compared to more recent ones? This can be shown using a cumulative distribution function. The blue curve shows what fraction of cases were overruled in less than X years (e.g. we can see that both reach ~0.5 within 20 years, so half of cases take less than that).

We can also just plot the overruling date vs the original date directly. This essentially combines the information in the previous two plots. The important things here are the density of points and the vertical distance from the black line (the farther below, the longer it took to overrule).

There were two things that really stood out to me:

Based on this, it seems like the Supreme Court since 1940 has been far more willing to overrule earlier decisions (often relatively recent ones). These changes tend to come in bursts that appear to coincide with transformative events (like major wars and cultural shifts), although that becomes harder to tell from 1960s onward due to the much higher baseline rate.

Not the answer you're looking for? Browse other questions tagged united-states constitutional-law common-law us-supreme-court comparative-law or ask your own question.