Is a lawyer allowed to point an unloaded gun at the jury, if it's just for a demonstration?

I understand that sometimes arms have factual bearing on cases and have to be entered into evidence but how anyone managed to point a gun at a jury and not get rugby tackled by a bailiff is beyond me. Pointing a gun is in essence threatening someone to me. Should pointing a gun at a jury not be considered intimidation and hence then also be a chargeable offence? It is just incredible to me that such an act was allowed to happen

I'm also wondering what sort of effect this kind of stunt can have with your standing with the Bar. If this sort of thing can have a lawyer lose his license?

I think you're referring to this image: 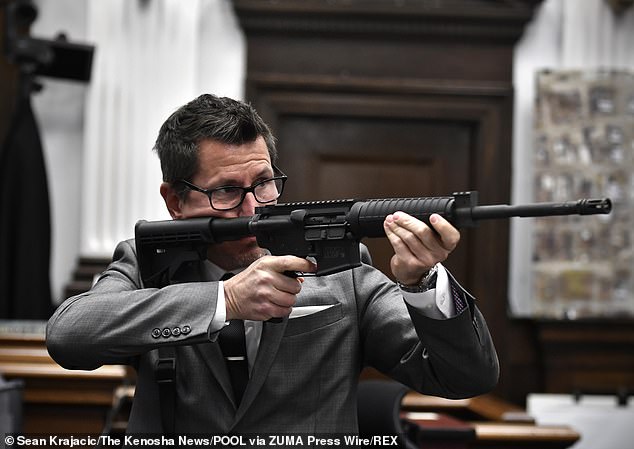 This is the prosecutor pointing the AR-15 at the jury.

Evidence, including guns, is allowed in the courtroom, but the prosecutor was widely criticized for his dramatic antics: pointing it directly at the jury, with his finger on the trigger (the rifle should have been checked for being empty, but not having your finger on the trigger unless you intend to shoot, no matter what, is elementary gun safety).

So it could be a crime if one of the jury presses the issue (specifically, pointing a gun at someone in a manner to intimidate them would be Assault with a Deadly Weapon, regardless of if the "weapon" was actually loaded, operable, or even a realistic toy. So long as the victim believes it was a real gun, it's Assault with Deadly. Given that it was done to 12 members of the jury, it can be Jury Intimidation or similar crimes). In all likelihood, the Prosecutor's office will likely exercise prosecutorial discretion and not bring charges for various reasons (If you want something innocuous, given the context of the situation, it might be harder to prove. If you want something more corrupt, Binger is the prosecutor... he and his office would likely not charge one of their own.).

The other recourse would be to file a complaint with the Bar Association which could result in Binger receiving fines, suspensions, or even disbarment. Given other problems with Binger's behavior in the trial, he could easily be facing Bar Association complaints as some of his behavior is highly questionable to downright unethical (Questioning Rittenhouse's invocation of the 5th to the police in front of a jury, introducing evidence the judge ruled inadmissible, questioning another witness's invocation of his sixth amendment right to counsel in front of the jury, and accusations of violating Brady disclosure rules). In all likelihood this is another log on the fire in any complaint to the Bar Association.

As stated in other comments, Binger at the least shows very very poor gun safety. You never treat a gun as if it was unloaded unless you checked yourself... and even then some experts advise under no exceptions just to be extra safe.

Not the answer you're looking for? Browse other questions tagged united-states criminal-law jury or ask your own question.

8
What are the legal consequences for serving in a jury if you are not eligible because you are not a citizen?
1
What is the legal grounds for the MA approved gun roster?
30
Should I serve jury duty when I have no respect for the judge?
0
How does the selection process for jury duty work?
2
Can a jury find a defendant guilty on a charge for which the defendant was not arraigned?
3
What's the point of a subpoena if you can just invoke the fifth amendment?
0
If in a country it's allowed to be sold a product with a harmful chemical, is the government or state legally responsible for it?
0
Why can't a lawyer just blame a random witness for harming a plaintiff?
0
Can Derek Chauvin's due process rights be guaranteed in a jury trial - for the murder of George Floyd - if the entire country knows about it?
2
Are defense attorneys allowed to display the law to the jury?