I found the following publication: Fast Multiplication on Elliptic Curves over GF(2^m) without Precomputation which

In the paragraph 4.2 a version using projective coordinates is described to avoid field inversions in GF(2^m) (please refer to the publication for unknown variables). 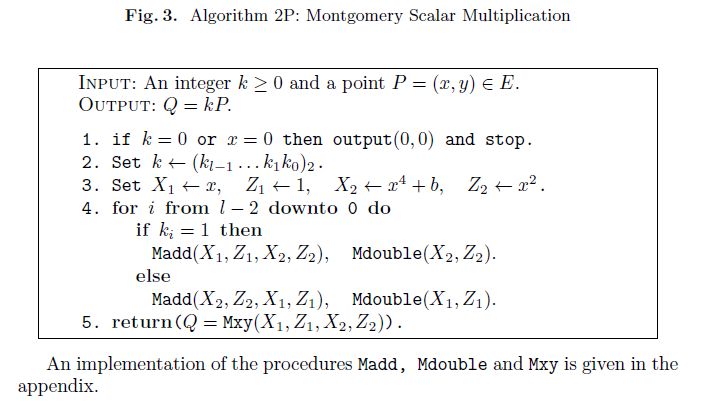 On the other hand, I found the following patent: Accelerated finite field operations on an elliptic curve which presents

A method for multiplication of a point P on elliptic curve E by a value k in order to derive a point kP comprises the steps of representing the number k as vector of binary digits stored in a register and forming a sequence of point pairs (P1, P2) wherein the point pairs differed most by P and wherein the successive series of point pairs are selected either by computing $(2mP,(2m+1)P)$ from (mP,(m+1)P) or ((2m+1)P,(2m+2)P) from (mP,(m+1)P). The computations may be performed without using the y-coordinate of the points during the computation while allowing the y-coordinate to be extracted at the end of the computations, thus, avoiding the use of inversion operations during the computation and therefore, speeding up the cryptographic processor functions.

From my point of view, the algorithm presented in the publication is a particular case of the invention described in the patent. Plus it is well known that there are a lot of patents about ECC over binary fields. But I have a little doubt because one of the author of the publication (Julio Lopez) is from the same university of the patent authors (university of Waterloo).

To answer the specific questions you asked:

The issue is the timing of the publication; the patent was filed in 1998; the academic paper was published in 2002. Once a patent is filed, the inventors (or anyone else, for that matter) can publish the patent, and that in no way invalidates the patent. To provide any protection against a patent, the prior art needs to be "prior", that is, earlier than the filing date of the patent.

Now, this particular issue is made a bit tricky because there does appear to be prior citations of this invention. The whole reason this invention is called the "Montgomery ladder" (not Montgomery multiplication - that's something else) was because it was first published by Peter Montgomery in 1987. One would think that would invalidate the patent. However, I'm not an attorney; I cannot advise you to proceed under that assumption.

Instead, I would suggest you follow the advice of Joao; there are plenty of elliptic curve routines out there; use one of them.

4
Graduation Project Patent Protection
0
File a patent disclosure after paper publication
3
What impact does prior art discovered after (US) patent awarding have on enforceability and even validity of that patent?
1
Patent Disclosure?
1
Provisional Patent Scope Strategy
2
Patent Application Due-Diligence
1
Does the vimium Chrome extension infringe on this patent?
0
Is publication sufficient to prevent patenting an idea?