How does Australia split its legal profession?

It proposes that "lawyer" is replaced with "junior barrister" because:

australia splits its legal profession, so "lawyer" is wrong

It also injects a link to the professional profile of the person cited in the question. 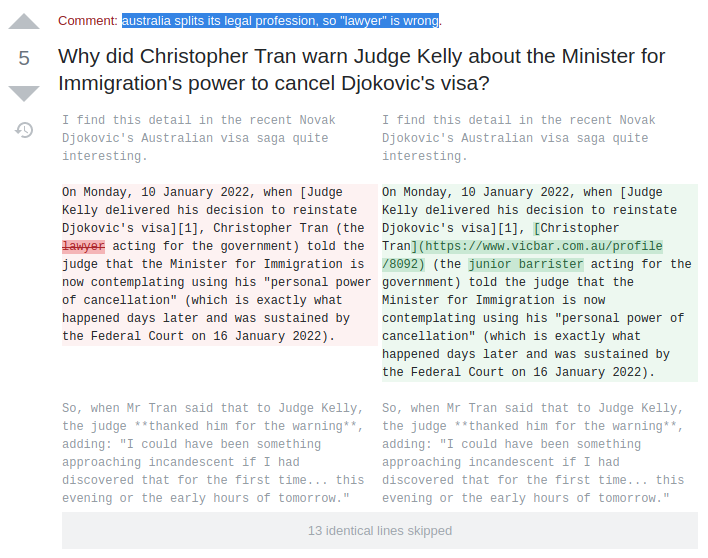 What is the deal with the splitting of the legal profession in Australia?

Is that just barristers and solicitors, pretty much like in New Zealand? Or something else? Is it actually wrong to call members of the legal profession in Australia lawyers?

I would guess that "lawyer" is just a general term, and the lack of specificity does not make it wrong. Am I wrong?

(I presume the actual purpose of the suggested edit is to inject the link and could speculate on who the user is, but that is irrelevant to this question.)

According to this Australian source the terms have the same meaning as every other jurisdiction I am familiar with:

Barristers are lawyers, but not all lawyers are barristers.

The split remains in England, Wales, Scotland, three states in Australia (New South Wales, Queensland, and Victoria), Ireland (both the Republic and Northern Ireland), and Hong Kong. In these jurisdictions, a lawyer will hold only one title. In jurisdictions where lawyers may, or even are expected to, hold both titles, the system is called a “fused system”. Here, lawyers start their careers as one of the two and pick up the license to act in the other capacity later if they choose. This covers the jurisdictions of Canada, Malaysia, Singapore, New Zealand, and the remaining Australian states. (Because Australia has a mix of fused and separated systems and state reciprocation, the three states with a separated system will reciprocate for states that allow for fusion. The reverse is not necessary, as fused states would only allow them for the license they already have.)

The United States is fully fused and all lawyers are solicitor-barristers, for comparison’s sake. This is why the U.S. uses “attorney” and “lawyer” interchangeably despite the former being another term for barrister in certain jurisdictions (namely Scotland) while the latter term refers to solicitors and barristers collectively. The U.S. did previously have a separate system, but completely fused when Courts of Equity disappeared in the 1850s and, therefore, the term “solicitor” is still used in the legal profession, though these days it tends to be an artefact title for an office or position that predated the fusion (e.g., The Solicitor General of the United States a.k.a. the lawyer whose office represents the federal government in the Supreme Court). Modern usage of “solicitor” tends to refer to a government lawyer, and most of the states with Solicitor offices are one of the Original 13 States (not all of them, though). Only three states that were not part of the original 13 use the term (Ohio, West Virginia (likely a hold over from when it was part of Virginia, which no longer uses the term), and Oklahoma). It should be noted the average U.S. Citizens associate the word solicitor with traveling salesman or door-to-door evangelizers, and generally use the term in signage forbidding the practice on private property.

Lawyer is a catch-all term for both barristers and solicitors.

7
Why did Christopher Tran warn Judge Kelly about the Minister for Immigration's power to cancel Djokovic's visa?

4
Is it legal to work without pay - Australia?
1
Is it legal to charge GST2 of 2.5% in Australia?
4
In English civil trial practice when does a barrister become involved?
1
Are lawyers generally discouraged to give high level/strategic legal advice?
1
In Australia are there any legal concerns with parents giving school teachers gifts?
0
What is Legal Theory? I am asking for its concept, its definition by some Oxbridge or Ivy League Legal Dictionary
1
How Justice of the High Court of Australia officially abbreviated?
4
Is it an offence if the target of racism only appears to be of/from a different race, colour or national or ethnic origin?
4
Why are barristers in England and Wales not officers of the court?