Looking for a law textbook that defines legal terms

Are there law textbooks that define legal terms? I would be very interested in such a book. I am a mathematician who likes terms to be defined precisely. I am sure in law classes, legal terms are defined. If it turns out that pretty much every law textbook defines terms precisely, then I will simply check Google.

Black's Law Dictionary is the leading publication of that type (the online version is based upon the out of copyright second edition, while the current version is the 11th edition from 2019), although not the only one. It is not really a textbook, however, so much as a resource used by both law students and practicing lawyers and judges.

The editor of all editions of it since 1996 is Bryan A. Garner, who is also the leading authority on what constitutes good modern legal writing (which in some cases violate outdated elementary school usage rules like never starting a sentence with a conjunction).

I am sure in law classes, legal terms are defined.

Not really. Your assumption is more false than true.

U.S. legal instruction is typically conducted using the Socratic method and with a review of the leading appellate court cases and the key statutory language in each subject.

Rather than having the textbook define a term, it is far more common for students in a class to read four appellate court cases addressing a subject, none of which define a term, and for the professor to ask a student chosen at random what that term means, often probing the student with follow up questions for fifteen or twenty minutes.

Usually, the final conclusion is not stated outright either by the professor or the textbook in textbook author provided text, although the cases referenced and statutes referenced will often provide one or more than one definition for a term, not necessarily consistent ones.

Law professors in the U.S., collectively, take the attitude that there is no absolute meaning for anything and that it is a waste of time to teach specific legal rules or doctrines which may change over the course of a student's career. Instead, they focus on teaching how to argue over close call gray areas in the law and how to identify legal issues, with the idea that the clear black and white rules of law are easy to learn after you graduate from law school when and if you need to do so.

There are books called "legal outlines" and "treatises" which are more direct than law professors and textbooks in providing answers in a particular subject, as are bar exam review materials. But, again, it is important to understand the nature of the beast before you use them.

I am a mathematician who likes terms to be defined precisely. I am sure in law classes, legal terms are defined. If it turns out that pretty much every law textbook defines terms precisely, then I will simply check Google.

This is a fool's errand (I was an undergraduate math major myself before becoming a lawyer).

This is because legal terms don't have a single consistent meaning. The same word or phrase can and often does mean different things in different contexts.

Many legal terms defined in Black's Law dictionary have multiple meanings stated and it is not at all uncommon for a statute or contract to define a word in a new and unconventional way.

I probably draft contacts with novel definitions for words at least a few times every year. There are a million or so U.S. lawyers, and tens of thousands of federal, state and local legislators out there further complicating affairs each year, in addition to thousands of judges whose decisions may coin new legal terms or new meanings for existing legal terms. This is why these resources need to be updated regularly.

For example, there is no one consistent definition of the word "person" which is widely used in a variety of statutes and regulations and contracts.

As another example, the term "security" means something very different in the law of securities regulation, where it refers to investments made by passive investors and traded in secondary markets, than it does in the law of secured transactions, where it means collateral for an obligation. Likewise, in bankruptcy law, national defense law, criminal law or tort law, the term security means something entirely different in each separate context.

As a third example, the term "equity" can have very different meanings depending upon context. It can mean the value of something net of debt to which it is subject. It can refer the the jurisprudence of courts of chancery before equity jurisprudence and law jurisprudence were merged in the 19th century which is relevant to the constitutional right to a jury trial in federal court and to the kinds of defenses that can be asserted in response to a claim. Or, it can refer to ownership interests in entities as distinct from debt interests in entities, as a third and not comprehensive list of meanings.

Common law countries, in particular (i.e. those countries with legal systems derived from those of England) are notorious for their inconsistent use of terminology, which is rather more consistent in civil law countries due to the way that civil codes are drafted.

The life of the law has not been logic: it has been experience.

In law, the fact that A implies B and that B implies C does not necessarily mean that A implies C. The law simply isn't that consistent and logical. You can't follow long chains of logical reasoning in the law with any confidence. Generally, only fact specific applications of the law that involve fact patterns similar to your own are reliable, and the law is also sometimes just plain inconsistent even when applied to the same set of facts.

The primary meaning of a "legal term" is the law which depends on that term. For example, there is a federal law that prohibits giving material aid to a "terrorist organization" ("Whoever knowingly provides material support or resources to a foreign terrorist organization, or attempts or conspires to do so, shall be fined under this title or imprisoned not more than 20 years, or both...). In the same section of that law, if defines "terrorist organization" as "an organization designated as a terrorist organization under section 219 of the Immigration and Nationality Act", so one then engages in reference-tracing to see what is in §219 of the INA. The important thing to understand is that (1) such meanings are assigned by act of Congress, and Congress changes its mind frequently and (2) such meanings are only dispositive for the specific piece of legislation in question – that is, Congress does not (generally) define terms universally, it defines terms for specific laws. Very rarely (in Title 1) Congress enacts sweeping legal word-redefinitions. For notorious example, 1 USC 7 says

In determining the meaning of any Act of Congress, or of any ruling, regulation, or interpretation of the various administrative bureaus and agencies of the United States, the word “marriage” means only a legal union between one man and one woman as husband and wife, and the word “spouse” refers only to a person of the opposite sex who is a husband or a wife.

Since such word meanings float in the rapidly-changing currents of politics, a legal textbook that suggests that these terms are fixed and well-defined would be a misguided textbook.

Sometimes (i.e. often) words are not defined by Congress, or the state legislature. An example is RCW 9a.36.011, the law in Washington forbidding assault in the first degree. The "general case" subpart of the definition is that first degree assault is when one "Assaults another and inflicts great bodily harm". There is no statutory definition of "assault". Instead, the law relies on "the common law", that is, the general understanding of what "assault" is. Certain terms like assault are "defined" in prior legal tradition (dating back centuries), and that accumulated knowledge of what associates with "assault" or "contract" are what is known as the common law. If you want to understand the essentials of "assault", you would consult one of the editions of "Restatement of Torts", which summarizes the wisdom pertaining to "assault", also "battery", "false imprisonment" and so on. (The current version is the third restatement). What the summaries summarize is the ruling of various courts regarding the law, especially that which relates to a specific legal concept (hence term). IMO the Restatements come the closest to being a compendium of "definitions", albeit ones that are unwieldy compared to a legal dictionary, for US law.

You should tag your jurisdiction.

I have used the Australian Law Dictionary 3rd edn by Trischa Mann. This is also listed by Australian universities like Deakin, Monash, Victoria University Melbourne.

Queen's University in Kingston has a list for Canadian law dictionaries.

Oxford University answers your question for UK law dictionaries. But they need to update their list. A Dictionary of Law has a 9th edn. 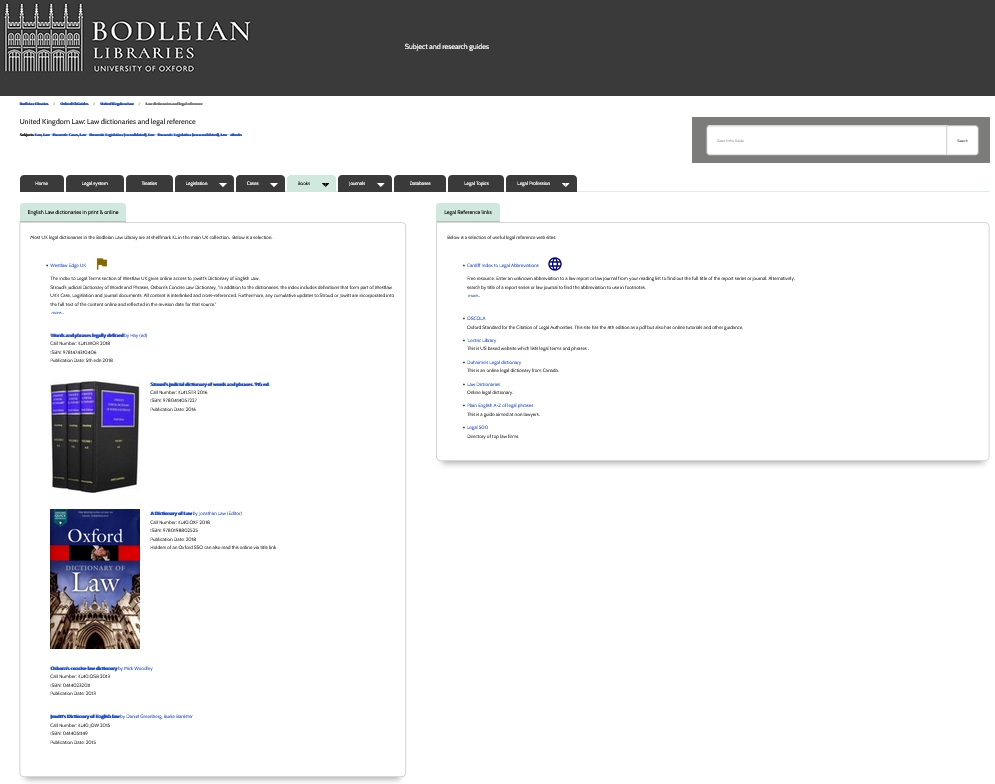 useruser
1
2
Add a comment  |
Highly active question. Earn 10 reputation (not counting the association bonus) in order to answer this question. The reputation requirement helps protect this question from spam and non-answer activity.

Not the answer you're looking for? Browse other questions tagged legal-terms reference-request or ask your own question.

1
Is it legal to attempt to redefine legal terms?
1
Are the terms "stipulate" and "determine" interchangable in legal texts?
4
When a law specifies that documents should be available for examination at "convenient times", for which party should it be convenient?
2
Terms and condition for web scraping
0
Can I use this other code in my own commercial projects?
2
Are "de facto independence" and "de jure independence" really international law terms?
2
Are Latin legal terms still used?
1
(Online) Dictionary for German legal terms