What content is banned in Germany in WhatsApp profile pictures?

There is an image being published in the internets which shows that, allegedly, in German city of Paderborn having the letter Z and the Russian flag in your WhatsApp profile is a violation of section 140 criminal code (rewarding and approving of criminal acts). 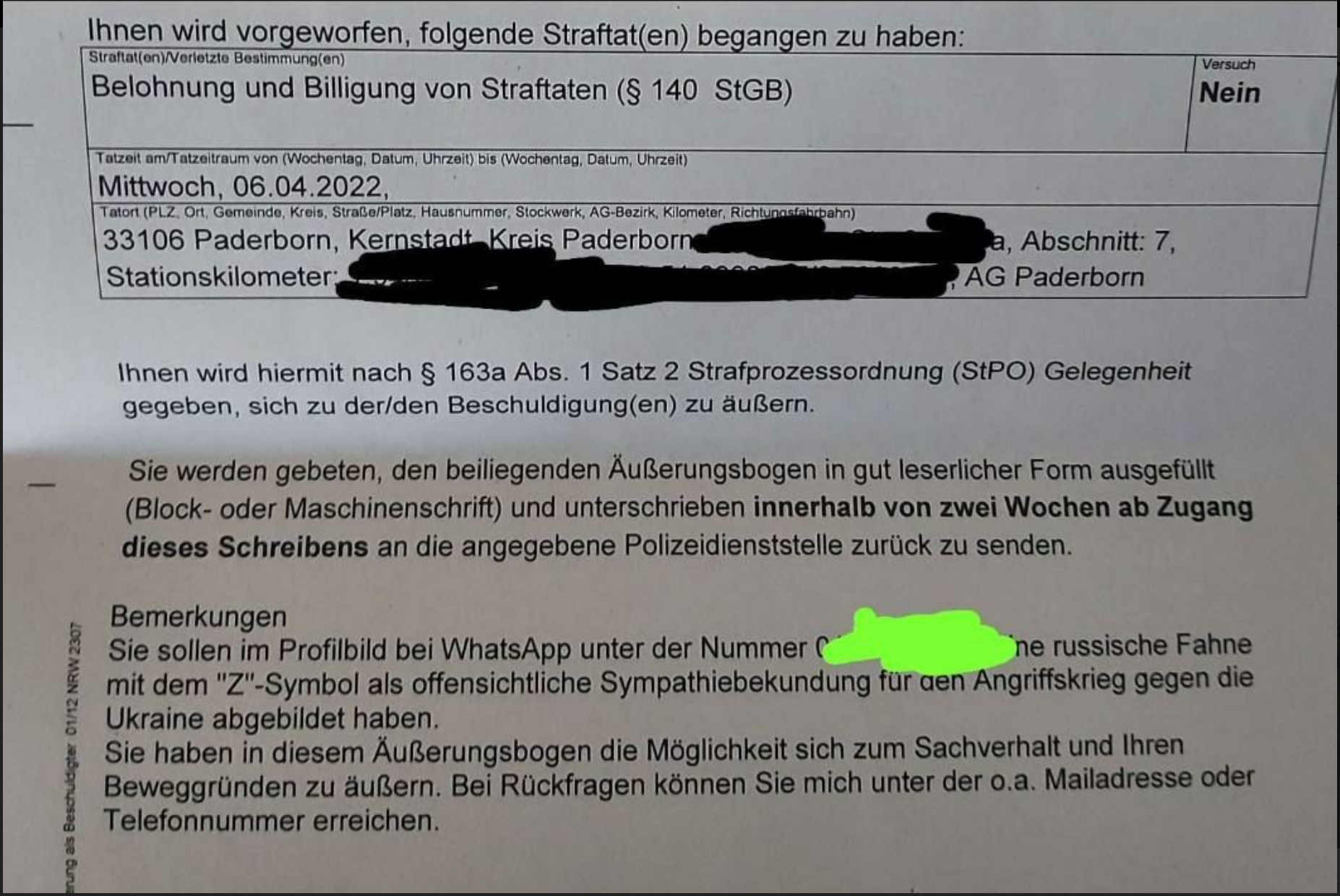 Is there an official registry where one can see all materials that are illegal under this law in Germany, if "published" in a WhatsApp profile picture?

Note: If this image is probably fake, please explain in the comments.

In turn, sections 138 and 126 enumerate various crimes, whereas the other mentioned sections relate to (child) sexual abuse.

The last alternative is indeed a “crime of aggression” which is defined in particular as “the use of armed force by a State against the sovereignty, territorial integrity or political independence of another State, or in any other manner inconsistent with the Charter of the United Nations”.

In Germany, there is a clear consensus that Russia is waging a war of aggression against Ukraine. The “Z” symbol is used in a Russian context in support of this invasion. It is therefore understandable that a prosecutor has the reasonable suspicion that publicly posting a Russian flag with the Z symbol is public approval of this crime of aggression. Spiegel Online reported of 140 similar cases across Germany.

Thus, the photo could be real. Of course, the accused should not accept this invitation to talk to the police and instead get themselves a criminal defense attorney. A defense strategy would likely argue that the profile picture was not “suitable for causing a disturbance of the public peace” so that the conditions of § 140 StGB were not fulfilled. More realistically, the defendant would not contest a fine.

Not the answer you're looking for? Browse other questions tagged criminal-law european-union germany freedom-of-speech or ask your own question.

1
Is Schmähkritik illegal in Germany and what could happen?
2
Ask people for WhatsApp address book consent; what to do when declined?
1
Would Germany extradite someone for looking at blasphemous content online? Hypothetical question.
0
What are customer laws about clothes warranty in Germany?
0
What EU law regulates the service providers liabilities and responsibilities for user posted content?
2
What are my rights if someone makes a false police report against me in Germany?
2
Is it illegal to access regional locked content via VPN in Germany?
1
What are the penalties of making false police report in Germany?
1
What are the laws for trespassing in Germany?