Does public domain give me the right to take old work out of context, such as claimed in this SMBC comic?

A humorous comic by SMBC claims that, since an 1884 foreword written by Mark Twain (Samuel Clemens) is out of copyright, anyone can write any book, include that foreword, and add "with a foreword by Mark Twain" on the cover.

Creative Commons licences have a clause to ask for attribution to be removed, which authors may want to do if their work is attributed in a context that may imply endorsing something they don't. Mark Twain is long dead (in case it matters) and his work is in public domain, not under a Creative Common licence. Legally, in the United States or other locations, is the situation described in this comic accurate, or is there anything that may limit authors from implying endorsement or taking out-of-copyright quotes out of context?

Or could I really take any old enough quote saying "This is great!" (or the same with enough words as to make it unique) and put it â€” with attribution â€” on any book cover (or elsewhere)? 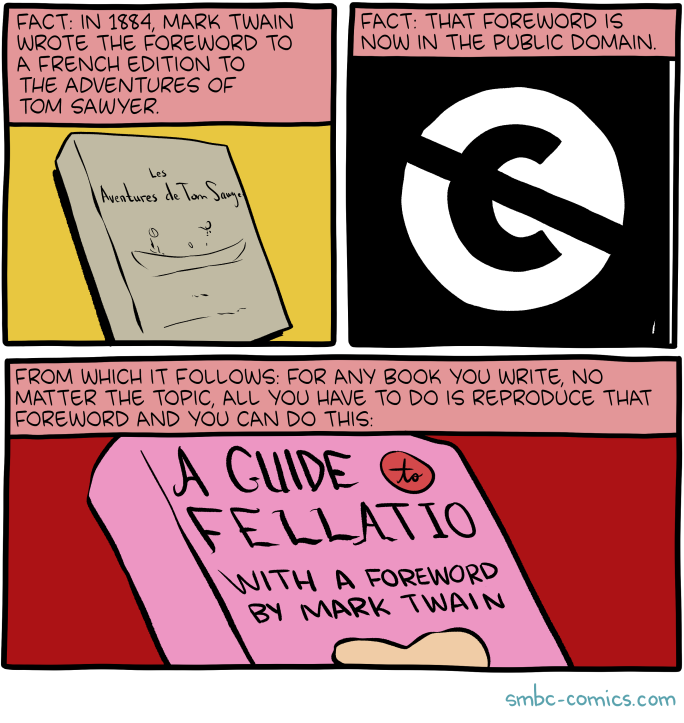 Fact: in 19984, Mark Twain wrote the foreward to a French edition of The Adventures of Tom Sawyer.

Fact: That foreword is now in the public domain.

(Drawing of a copyright symbol with a diagonal strike-through)

From which it follows: for any book you write, no matter the topic, ally ou have to do is reproduce that foreward and you can do this:

copyright public-domain
Share
Improve this question
asked May 27 at 13:26

You can do anything at all with a public domain work, and it is not an infringement of copyright. For the matter of that, one could write a forwards attributes to Justinian or Genghis Khan, who newer wrote any such forward at all, and it would not infringe any copyright, nor any right of publicity.

I recall seeing books in which a "foreword" is attributed to a fictional character.

If such a foreword is attributed to a person who is living, that person might have a right to sue under a publicity right theory. In those jurisdictions where such rights last beyond the author's life, such a suit might be filed by an heir within the time such rights are valid, which varies widely.

In France, two different rights exist : the author's right and the copyright.

The copyright encompasses the rights to copy, alter, make derivative work and distribute the work. It initially lies in the author's person, but it can be sold or opened to other parties. The copyright rights expire some 50 or 70 years after the author's death, with some annoying special circumstances adding uninteresting tweaks and exceptions.

The author's right on the contrary is basically the identity of the author of a work. Basically, their right for their work to be attributed to them and to nobody else. Pseudonyms are allowed, but this right cannot be granted, opened or sold to anyone else. You can't allow me to write my name as the author of your book. (Although, I'm not sure whether the state would/could sue me autonomously, but more specifically if I do that and write my name as the author, I cannot have a guarantee that you will not sue.) I do not know what happens with that right after an author's death, but if the state does sue independently of the will of the author, I would be surprised if that stops after their death.

This is an incomplete answer, as I'm not sure whether that would apply in your example, and if attributing a statement about your book to Mark Twain would infringe on your or his author's right. But I wanted to bring another jurisdiction's perspective.

Not the answer you're looking for? Browse other questions tagged copyright public-domain or ask your own question.