Can Satellite Imagery be used on 3D Models inside a video (with or without Contribution)?

I used Satellite Imagery from Bing Maps to create 3D models. These 3D models will be shown inside of a YouTube video (which is commercial use?). So there's a couple "layers" there: I'm using satellite imagery, on a 3D model, rendered inside 3D software, which then has after effects, which is then inside of a public YouTube video. 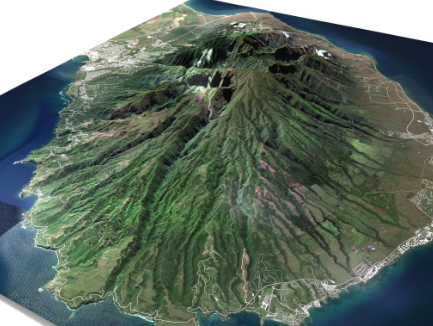 I did not create that, credit for that goes to cgtrader creator 3d-apxumekmop, but it looks like that. This is just an example to give you an idea.

Which applies to me?

You must display the Bing logo with the service at all time.

Assuming that the imagery is on the screen... correct? The imagery is only on screen for 5% of the video, and I do not want to have to display a Bing logo for the entire video.

You may not remove any search box, portion of the results, or advertisement.

That does not apply to me. Does this imply that what I am doing is somehow illegal or outside the terms of use?

And if that's the case, then I have more question. That image above comes from a 3D asset for sale on cgtrader. I am not certain, but I'm 90% sure it looks like Bing Maps imagery (namely based off where satellite images in the ocean change color). In any case, if the answer is #4, how is that legal? Another example: how is this YouTube video legal considering he did not give GoogleMaps credit during this part of the video?

It would appear that Bing Maps uses USGS!

And I can use USGC Imagery.

Am I good to go now? I should I go back and get satellite images from USGS (even if I can confirm that they are exactly the same...?)

Edit 2: Okay, it looks like it depends on the where the images are taken. So I would need to see where the images come from (for example Vexcel Imaging or Earthstar Geographics SIO), and then see what's legal and what's not...? And maybe just replace my current satellite imagery with USGS imagery? Or are those companies using USGS? Also, I cannot tell what images are "Restricted Imagery and Datasets" inside of USGS. The rabbit hole goes deeper. I might have an answer soon enough.

Browse other questions tagged copyright fair-use photography youtube or ask your own question.

4
Does tracing an aerial photo infringe copyright?
4
Is it legal to use Youtube thumbnails on another website?
6
Can I use modified version of Apple, Android, Windows, and Blackberry logos in commercial advertising to show compatibility?
30
How Can NASA Images/Videos Not Be Copyrighted?
1
Is it legal to use others Youtube videos on my website to teach people
19
Can satellite images be copyrighted?