To what extent are England and Wales one completely wedded jurisdiction?

Are there any legal provisions that apply only to England or only to Wales but not respectively to the other? Why are they so closely associated with each other as to have just one tag on the site, but Northern Ireland and Scotland each seem to be their own worlds?

Whole chapters in books are written on this question.

(a) ENGLAND AND WALES

England (a single territorial entity by 927 CE) and Wales (a principality) were created into a single realm in law by the Laws in Wales Acts 1535– 42. For some purposes, England and Wales are treated as a single entity. There is a single court and judicial system covering both of these parts of the United Kingdom— although even here there is some differentiation, because there are statutory rights about the use of the Welsh language in court proceedings that apply only to proceedings in Wales.5 For several years there has been discussion about whether Wales should be recognized as a legal jurisdiction separate from England, but turning this into a practical reality, even if feasible, is not high on the political agenda.6 For purposes other than the legal system, England and Wales are constitutionally distinct. Since 1998, there has been a directly elected National Assembly for Wales, with law- making and executive powers in relation to Wales only.

Bradley, Ewing and Knight, Constitutional and Administrative Law (2022 18th edn). Pages 35-6. I bold faced the most germane sentences. You don't have to read the first para., but I quoted it just for completeness.

Historical development of the United Kingdom

While there is no need to summarise the lengthy history by which England became a single entity, it is worthwhile briefly to examine the historical formation of the United Kingdom. The military conquest of Wales by the English reached its culmination in 1282, when Prince Llywelyn was killed, and his principality passed by conquest to King Edward I of England. Thereafter the principality (which formed only part of what is now Wales) was administered in the name of the Prince, but the rest of Wales was subjected to rule by a variety of local princes and lords; at this period English law was not extended to Wales, where the local customs, laws and language prevailed. From 1471, a Council of Wales and the Marches brought Wales under closer rule from England, and the accession of the Tudors did much to complete the process of assimilation. In 1536, an Act of the English Parliament united Wales with England, establishing an administrative system on English lines, requiring the English language to be used, and granting Wales representation in the English Parliament.7 In 1543, a system of Welsh courts (the Courts of the Great Sessions) was established to apply the common law of England. The Council of Wales and the Marches was granted a statutory jurisdiction which it exercised until its abolition in 1689. In 1830, the Courts of the Great Sessions were replaced by two new circuits that operated as part of the English court system. After the union with England, Acts of Parliament applying exclusively to Wales were rare.8
The mid-19th century saw the beginning of a political and educational revival and occasional Acts of Parliament applying only to Wales began again to be passed.9 In 1906 the Welsh Department of the Board of Education was established, the first central department created specifically to administer Welsh affairs.10 In 1914 the Welsh Church Act was passed, which disestablished and disendowed the Church of England in Wales. From time to time, the identity of Wales was recognised as new administrative arrangements were made.11 In 1964, the post of Secretary of State for Wales was established, and the Welsh Office emerged as a department of the UK government. Thereafter administration of Wales through the Welsh Office was to an extent based on the model of the Scottish Office.12 Wales and England share a common legal system,13 but some statutes make special provision for Wales. By the Welsh Language Act 1967, the Welsh language may be spoken in any legal proceedings within Wales, by any person who desires to use it; and Welsh versions of any official document or form may be used. The Welsh Language Act 1993 created the Welsh Language Board, to further the principle in Wales that public authorities and the courts should treat the English and Welsh languages on a basis of equality. The Board was replaced by the Welsh Language Commissioner as a result of the Welsh Language (Wales) Measure 2011, which maintained the general principle that Welsh is an official language of Wales, such that people have the right to speak and be spoken to in Welsh in all official contexts.

Simon Gardner and Emily MacKenzie, An Introduction to Land Law (2015 4th edn). I cannot remember the page number, but I reckon p 47 of 569? This is footnote 1.

1 Traditionally, ‘English and Welsh’, in that the two countries formed a single jurisdiction with a single set of rules; but devolution has created the possibility of divergence. To date, however, the rules in the area of ‘land law’ remain very largely common, so references to ‘English’ law may be read as very probably extending to Welsh law too. But for divergence, see eg Housing Act 1985 s 86, and Law Commission, Rhentu Cartrefi yng Nghymru/Renting Homes in Wales (Law Com No 337, London, 2013).

Why are they so closely associated with each other as to have just one tag on the site, but Northern Ireland and Scotland each seem to be their own worlds?

Most laws of general applicability, such as criminal law, and private law (i.e. the law governing the interactions of private parties like property law, contract law, landlord-tenant law, employment law, etc.) are enacted by the National Parliament at Westminster (or effective as part of a shared English common law of case precedents) and shared by England and Wales which have a uniform integrated court system.

In contrast, Scotland and Northern Ireland have greater autonomy to enact laws of general application because more authority has been devolved to those regional governments than to the National Assembly of Wales. They also have their own court systems.

Wales was basically fully integrated into England starting in the 1200s and subsequently restored some autonomy.

Scotland never lost its high level of autonomy and was initially joined to England only by virtue of having the same monarch, rather than being the same country. The United Kingdom was formed first by the personal union of monarchs from 1603 (under King James VI of Scotland a.k.a. King James I of England) followed by a federal style merger of governments approved by the Scottish and English parliaments in 1706-1707, rather than by conquest and it has much more government autonomy in generally applicable legislation and its judicial system than Wales does, and more than Ireland had when it was ruled by England. On the other hand, Scottish sentiment towards independence was not exactly unanimous in support of staying with the U.K. in the last referendum in 2014 when 44.7% of votes cast were for independence with 84.6% voter turnout (including voters as young as age 16).

Northern Ireland's story is a bit more complicated as Ireland had a legal status similar to Wales from a similar medieval era, but this was complicated by the Irish independence struggle ultimately leading to the creation of the Republic of Ireland and Northern Ireland. The fine line and complexity of the situation in Northern Ireland is illustrated by this map, and strong autonomy was necessary to allow it to maintain the fragile Protestant-Roman Catholic balance in a divided society there: 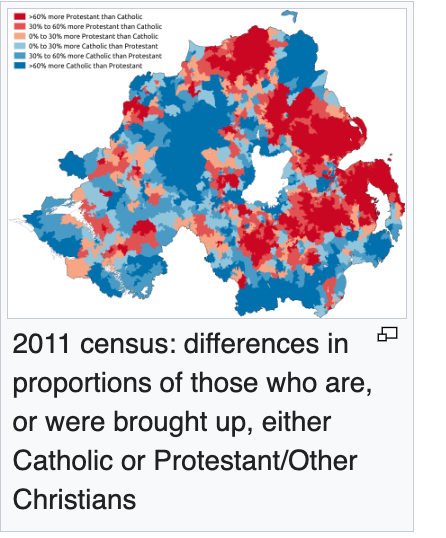 Each of the components of the United Kingdom has a separate and historically determined status that is not exactly parallel to any of the others. England has no national assembly of its own, sufficing to use the national parliament for its laws despite the fact that some seats in that parliament that govern it are selected in Wales, Scotland and Northern Ireland. Likewise, before the U.S. gained independence, different parts of the U.S. had distinct relationships to the U.K., as did the various colonial possessions of the U.K. (e.g. India, Australia, Canada, New Zealand, Kenya, Tanzania, Hong Kong).

The U.K. is an exemplary example of the philosophy that consistency is the hobgoblin of small minds. To pluck out just one more random example of the English tendency, "Scotland Yard", the national police force headquarters in the City of Westminster within the City of Greater London in England, has jurisdiction over England and Wales, but not over Scotland.

Legal Distinctions Between England And Wales

To provide a few other examples in addition to the example of language related laws noted by @WeatherVane (noted on my recent visit to England and Wales) and to embellish on that point a little further, the Welsh language is resurgent in Wales where it is a mandatory subject in public schools (often in the North with Welsh as the primary language of instruction) with about 30% of the population (more than 800,000 people) who either speak it as a first language (which is common among the very old and among young people in Northern Wales) by people who are mostly bilingual with English (but may reach for an English word or two now and then) or as a fluent second language.

The 20 areas of responsibility devolved to the National Assembly for Wales (and within which Welsh ministers exercise executive functions) are:

The Welsh Language (Wales) Measure 2011 (the Measure) modernised the existing legal framework regarding the use of the Welsh language in the delivery of public services.

The Measure makes provision for the development of standards of conduct relating to the Welsh language which will gradually replace the existing system of Welsh language schemes provided for by the Welsh Language Act 1993 (the 1993 Act).

Not the answer you're looking for? Browse other questions tagged united-kingdom england-and-wales jurisdiction or ask your own question.

3
Can the deliberate withholding of sex constitute coercive and controlling behaviour under English & Welsh law?
2
In the U.S., can corporations be formed under jurisdictions at levels lower than states?
1
Price fixing concern (UK competition law)
4
What kind of legal action could be brought against Hogwarts staff?
4
Northern Ireland: Is Homicide an offence in common law or is it an offence in statute?
2
I'm Irish but have an English birth cert. What are my rights regarding dual citizenship and getting an English passport?
19
Can everyone name Soldier F now that an MP has?
2
Who has jurisdiction on an International flight in international airspace in a sexual assault case?
1
To what extent is Walt Disney World exempt from the laws of Florida and the United States?
1
Is political viewpoint a protected class under equality act 2010 and other such laws and if so is it legal to discriminate against nazis?