Is it a crime to "steal" your own money from a bank?

It is in the news that it has become a thing to stage a bank "robbery" to get access to ones own money in Lebanon. While these have involved things that are undoubtedly crimes (such as brandishing a toy gun, and pouring gasoline and threatened to set it on fire), if one had an opportunity to take your money without the banks permission but not committing any other crime (perhaps as a result of another incident, see picture), would that be illegal?

Lebanon has been reeling from a worsening economic meltdown since 2019, plunging 80 percent of its population – about three million people – below the poverty line, according to the United Nations.

Since 2019, Lebanese banks gradually imposed draconian controls on deposits, effectively locking millions of customers out of their foreign currency savings.

Any jurisdiction would be interesting, this is occurring in Lebanon but one could imagine it happening anywhere if a financial crisis occurs. 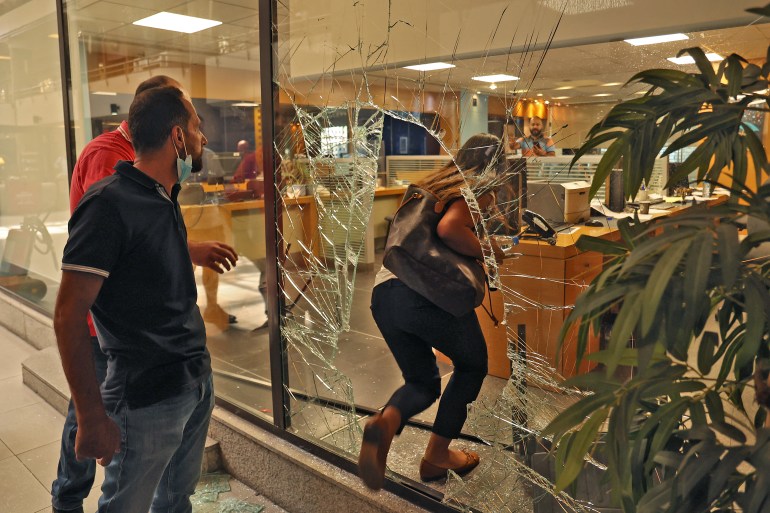 The physical cash in the bank is not your property, at least not in US law (according to Scalia). It becomes your property when the withdrawal is performed by some means specified in your contract. A deposit gives you a contractual right to demand money from the bank.

Bank robbery is a crime. Having money deposited with the bank doesn't change that. The only possible chance a robber has at trial is jury nullification.

I haven't found records for that in Lebanon, but it does have jury trials.

Impartial review classifies Lebanon's justice system as somewhat corrupt, but generally compliant with the basic principles. So it might be possible to get away with it at trial, but a very long shot.

The condition you set of "not committing any other crime" could be tricky. In many (most?) jurisdictions, if the bank were to leave a box full of notes in the teller hall, or even on the street outside, it's still theft to take any of it. Just because you can physically take something unchallenged, doesn't mean you can legally do so.

Whether you'd actually be prosecuted for such an act is debatable by location, but it's likely still a crime. In locations with reasonable law enforcement, you can expect that a judge would be required to decide if it was a punishable offence or not (so you'd be arrested, charged, detained, tried, etc). In less well managed locations, a bit of "mob rule" or "police judgement" may apply. That is what appears to be happening in the picture above - "the mob" have decided it's not a punishable crime. Time will tell if law enforcement will take a different view when they investigate (if they investigate at all).

The thinking behind this is that whilst the bank "owes" you what you've deposited, they still get to decide how they repay you. You're not their only customer, and so they have to manage repaying all their customers (hopefully fairly). If there's a "run on the bank", for example, they would ration the money they have to each person looking to withdraw. You'd be rightly annoyed if the richest person in town got all their money and you didn't, for example.

By way of a tangential example, some years ago in the UK, rioters broke doors and windows to several shops. At a later time, some people walked into those shops and took some of the goods. They were subsequently prosecuted for theft.

The difference here is they weren't "owed" those goods by the shops, but the point is that even though they were able to take the goods unchallenged, they were still committing a crime. Doors, safes, security guards etc, or lack thereof don't affect the law.

Bank robbery is probably illegal in Lebanon, but one would have to sift through the penal code. Somewhere around Article 690 there is probably a law against forcibly stealing the property of another. Article 638 (2) specified the penalty for what seems to be "bank robbery":

which Google tells me says "If the theft occurred on the money or assets of a bank, a goldsmith's shop, or a money exchanger".

This clause would be incomprehensible if, under Lebanese law, a bank is simply a storage facility for the physical property of individuals (the reasoning that seems to underlie the "it's my money" claim). It is reasonably well established that banks in Lebanon can legally use deposits, which is why they can pay interest. Also, the central bank (apparently) has the authority to boss around banks in Lebanon, and they have restricted access to funds.

A separate question is whether banks can legally prevent a customer from accessing their safe-deposit box (on the premise that because of the crisis, they may have to seize all property). That seems much less credible.

Consider the case that a bank is bankrupt. People paid one billion into savings accounts, and they have only 500 million to pay back. Everyone will lose half their money. If you put a million into your savings account and force the bank to hand over a million to you, you are definitely stealing half a million from the other debtors.

Plus of course all the other arguments given here.

The root problem is that if the bank is "in trouble", the government will have proscribed a specific procedure for how its assets are to be distributed to creditors such as yourself.

You are bypassing that procedure to favor yourself at the expense of other depositors.

We already have that in US bankruptcy. Suppose a company goes bankrupt under Chapter 11, and when the assets are liquidated, the proceeds only cover 30% of the debt. Each creditor gets 30% of their owed amount. However, one creditor was buddies with the owner and got 100% out before the bankruptcy filing. The courts can and will "claw back" the excess 70%. BTDT!

So even if you succeeded in taking 100% of your deposit back, if the national law only provides for you to get 30%, then you did steal the 70% and did deprive that money from other creditors and depositors, and that means unjust enrichment did occur, and that makes the method by which you got it definitely a crime.

Which it probably would be, even if unjust enrichment had not occurred, because the actions of breaking windows or waving a gun around are crimes in and of themselves.

There actually is a legal procedure (in the US) for walking into a bank with a gun and forcibly taking money out of teller drawers. It is called a "Till Tap" and the gun is on the hip of the Sheriff. You get it after you win a suit for money judgment, and they non-cooperate with the normal collection procedures.

5
What legally happens when someone takes your bank card and uses it?
3
What is the status of money in a bank account, compared to a debt obligation or a safe deposit box?

7
Someone withdrew money from my bank account - what are my rights?
1
Sending money from China
0
Is attempting to steal a crime in Canada?
1
Can a S.Korean game have the right to steal money and items and close your acct for no reason?
2
Is failing to report a bank error in and of itself a crime?
3
Could you steal money from a criminal organization and publicly declare it without legal repercussions?
3
Can you "steal" your own stolen car?
5
What legally happens when someone takes your bank card and uses it?
3
What is the status of money in a bank account, compared to a debt obligation or a safe deposit box?