Can my employer take money from my wages?

I live and work in Ireland. The hotel I work for recently had to pay for an item a guest left in the room because the cleaner deemed it rubbish and threw it in the bin.

Now my employer is asking everybody to sign the document attached.

This memo is being circulated to all staff as a reminder and is a firm notice to clarify any outstanding ambiguity when servicing a departure bedroom.

When removing used items and rubbish from bedrooms, you must ensure that all rubbish bins are emptied and that bin liners are replaced.

Ensure that all items left behind by a guest which are not in the rubbish bins are checked thoroughly to ensure that they are not items of lost property. If you are unclear whether the item should belong in rubbish or not, please check with your supervisor or Manager, before disposal, to ensure that it doesn’t contain any guest belonging or lost property.

Please ensure as per the recycling policy that all recylcables such as clean paper products, clean plastic wrapping, glass, plastic bottles & containers are removed to the Kitchen yard or back of the linen room and place (sic) in one of the large green skips.

Please be advised that any breaches of this Procedure will result in disciplinary action resulting in sanctions up to and including dismissal.

Where the company suffers a financial loss resulting from an employee’s negligence i.e (sic) throwing property into bin, (sic) these monies will be deducted from the employees’ (sic) wage.

Also, please be advised that you are now in receipt of a reasonable management instruction to comply with the procedures above during the course of your working duties.

If you have any queries regarding this please contact me 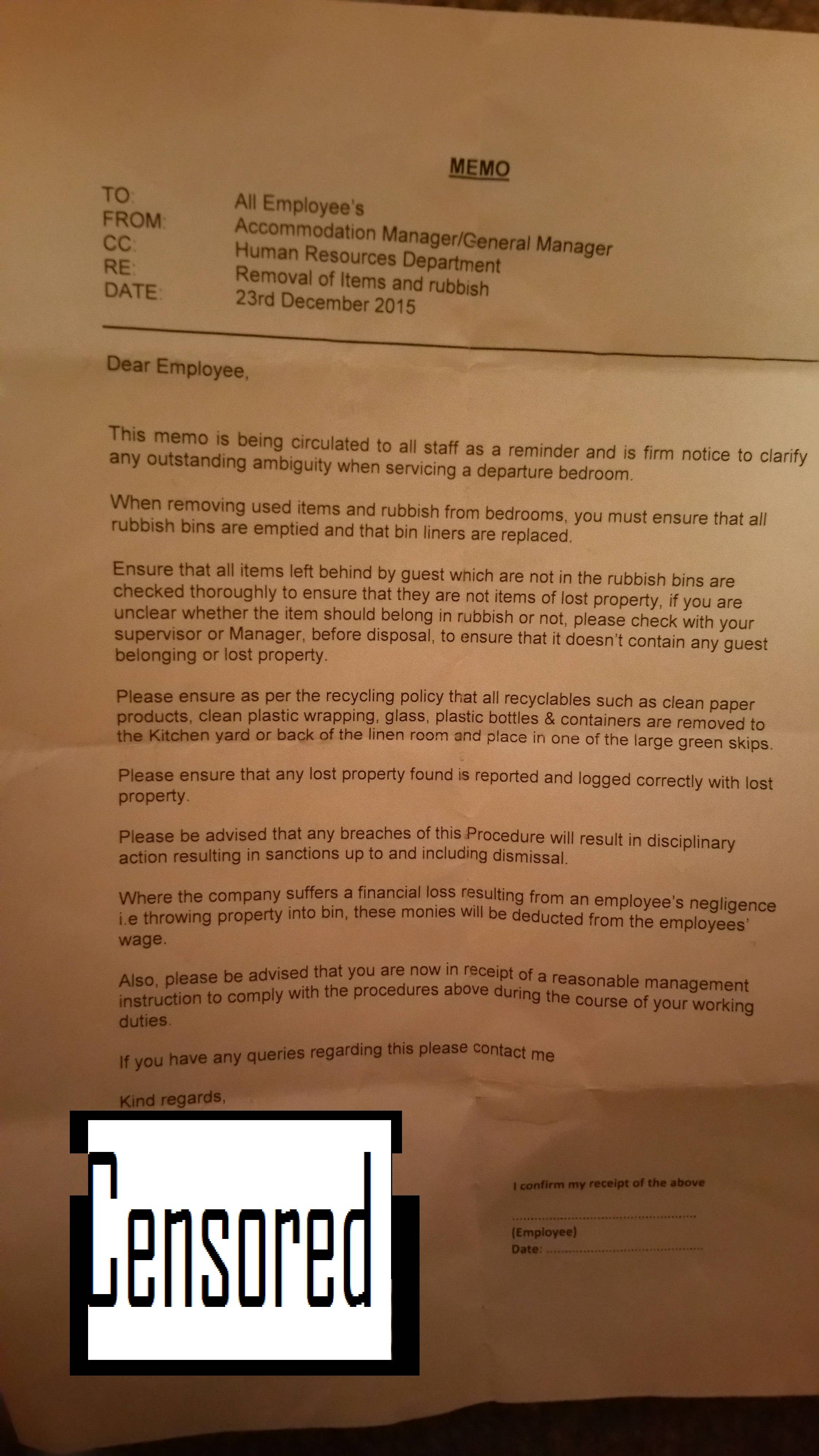 I imagine that the twelfth time that management has to evaluate whether a used condom is personal property or trash, they will revise their ill-advised little letter.

Additionally, how does the guest know for certain that an item was actually left in room, and how does management know that a particular staff was the only one who could have encountered it? They'd have to implement key card logging or video cameras. i.e. the staff could simply deny that any items were found in the room, or perhaps they could demand that a manager must clear a room of possible guest property before entering.

Put simply, how to prove a particular person had access to the room and exercised that access, AND that they encountered the wayward guest item?

If no clear cut answer to what is considered "Lost Property" there is a clear case of ambiguity in what at least the drafter of this considers a contract. (Whether this is is another question.)

What I'm left wondering is what happens if you see a cash cheque for a million dollars in the waste basket... Recycle or Lost Property?

As a general rule of thumb ambiguity in a contract terms are held against the drafter of the contract. Especially when the drafter is in a superior bargaining positions (As it clearly seems is the case here.)

For your convenience I would tell you to ask your employer to give a clear definition of what you should consider "Lost Property" So as to better understand what is required of you.

Whether your employer can deduct your salary for damages they decided was your fault is an altogether different question.

Here is some quotes.

All employees are, to some degree, agents of their employers. Similarly independent contractors will also be agents of whomever they have contracted with. The extent of their authority will depend on the circumstances.

An agent's authority to act on behalf of his or her principal could be actual, or apparent.

In some situations, the courts find an inherent authority for the agent to act in order to protect innocent third persons. Under this concept, a principal is liable for the wrongdoing committed by his or her employees if the acts were within the scope of the employee's duties. For example, if a salesman is instructed by his employer not to warrant the fitness of any of the vacuums being offered for sale and the salesperson warrants a vacuum, the employer will be held to the warranty. In this context, scope of employment means that the employee is engaged in the furtherance of his or her employer's business.

A person is normally not responsible for another's acts unless that person is authorized to act on his or her behalf. An exception is the doctrine of "apparent authority" sometimes used by the courts to prevent injustice to third persons. The mere statement by a person that he or she is an agent of a certain person is insufficient to establish the agency. The third person has a duty to ascertain whether or not an agent has the authority to act in a particular situation. If the principal has led others to believe that the agency relationship exists, he will be bound by the acts that an agent in that situation would customarily have the authority to do.

The agency relationship would be used by the courts when the principal has a duty to deny the relationship but fails to do so. For example, if May in Cathy's presence tells others that she is Cathy's agent, Cathy has a duty to deny the relationship. If she fails to, then any third persons present might consider that May is, in fact, an agent of Cathy's. An agency relationship may also be found when the principal negligently allows another person to act as his agent. For example, a stranger comes into a store when no one is present, waits on a customer, sells a product, and pockets the money. Because it was reasonable for the customer to assume that the stranger was a clerk, the owner cannot force the customer to pay for the merchandise a second time.

Also lastly and probably most important for your issue.

xiii. LIABILITY FOR ACTS OF AGENTS

Under the doctrine of "respondent superior", a principal might be liable for certain acts of his agent. To be liable there must be an agency relationship, and the conduct must be within the scope of employment. To be within the scope of employment, an employment situation must exist. If the agent is an independent contractor, whose duties the principal has no right to control, no employment situation exists and the principal is not usually liable for the acts of the agent.

To determine if an employment situation exists, the courts not only look at the degree of control that the principal has over his agent, but also whether or not his agent is engaged in a distinct business, the degree of skill involved in the duties, and the period of employment. If the court determines that the agent is in fact an employee and not an independent contractor, the employer (principal) will be liable for the torts (misconduct and negligent acts) he or she committed that injured others or damaged property belonging to others.

Also what I would also like to tell you is that your employer does not have carte blanche to deduct your salary for every trumped up charge they can think of.

If you have a work contract in place (I hope you do.) Then your employer is obligated to pay you in the manner that your work contract demands. So if your employer pays you less then what you have both agreed upon then you have the same remedies to your disposal that any breach of contract law provides.

Ireland (whether Norther or Republic) is part of the EU.

The company has to pay you for the work you do. They have no right to deduct anything from your wages except your taxes, pension etc. They may sue you for damages that they claim you caused, and will most likely be laughed out of court.

If they are afraid to be responsible for damages that you may have caused, that's what liability insurance is there for. Alternatively, if a cleaner throws something in the bin and a guest wants damages paid, the hotel doesn't have to pay out, that's their own decision, they can wait until they are sued by the guest. Until they are sued and lose a case, they don't have to pay.

Not the answer you're looking for? Browse other questions tagged employment ireland or ask your own question.

1
What action can I take if an employer asks me to work more than 48 hours per week?
1
Can an employer dictate when an employee can take annual leave?
2
Can an employer withhold a relocation repayment from an employee's last paycheck?
1
What recourse does an ex-employee have when commission/wages are being withheld by employer?
0
Claim for unpaid wages in NY
2
Concealing Medical Conditions from Employer
1
What intellectual property rights are being surrendered with this contract?