How common actually are perjury proceedings?

I’ve read a number of tenant advice materials that caution that landlords frequently lie at court and so one really has to be prepared for this to potentially happen.

Meanwhile, I have read a number of civil court decisions where judges quite convincingly articulated their suspicions of a party to the case having been dishonest about the facts, and laid out their reasons for being suspicious of the party’s honesty and credibility. Yet, the only consequence of this had appeared to be that the party was disbelieved on that point of fact which was in dispute and consequently (in these cases) lost the case(s). At no point were the disbelieved parties warned that they may face other consequences for the fact that they were found to have lied to and misled the court, much less proceeded against for having apparently done so.

Likewise, in a criminal context, it seems fairly often that a defendant would testify insistently and adamantly to a false narrative of their innocence perhaps on the basis of a concocted false alibi, but is nonetheless found guilty. In these cases it seems that the consequence is basically that they are convicted, with perhaps less sympathy or concession than they may otherwise have gotten for pleading guilty honestly at sentencing, but there is no further separate proceedings for lying in open court.

How often does it actually happen that a party is actually proceeded against for perjury / misleading a judicial body / contempt of court, or faces any other consequences for doing so other than losing their dispute/point/case? And whatever the answer, why is this?

Is there any precise statistical data available as to the frequency of such occurrences? Honestly it seems like courts would hardly have the manpower and resources to proactively take it upon themselves to go after and proceed against everyone who has ever made a dubious statement to them. Are there any notable cases that come to mind which one may consider for a better understanding of the issue?

Data is not kept at the level of granularity to single out perjury. Instead, it is captured within the category "156 Offences Against Justice Proceedings", which also includes things like Hindering Investigations, False Accusations, Concealing Offences or Evidence, Perverting the Course of Justice, and Corruption of, Threats to, and Influencing of witnesses, jurors, and judges.

The crime of perjury

Further, s338 provides that prosecutions for perjury can only be initiated by the Director of Public Prosecutions (DPP), the Attorney General, or the judicial officer before whom the perjury was allegedly committed. And in the latter case, the DPP must be informed. This deliberately restricts prosecution for perjury to the highest levels in the administrative government and the particular court where the offence occurred. This appears to be a deliberate decision to restrict such prosecutions to only those with the greatest public interest.

Looking at the elements of the crime:

Courts and tribunals are well aware of the fallibility and mutability of human memory, and accord witness testimony is accorded a much lower weight than physical, documentary, or circumstantial evidence.

People remember things that didn't happen: testifying what you remember is neither "knowing the statement to be false or not believing it to be true". It is possible and relatively easy to change someone's memory of an event (intentionally or accidentally), at least in small but significant details like who else was there or what somebody was wearing. It's even easier to change your own memories unknowingly, especially if you have an incentive for remembering events slightly differently - like not going to jail. Rules of evidence provide strict limits on what evidence is admissible specifically to guard against this, but things always get through.

Except in the most egregious cases, tribunals assume that the witness believes what they are saying even if the tribunal doesn't. 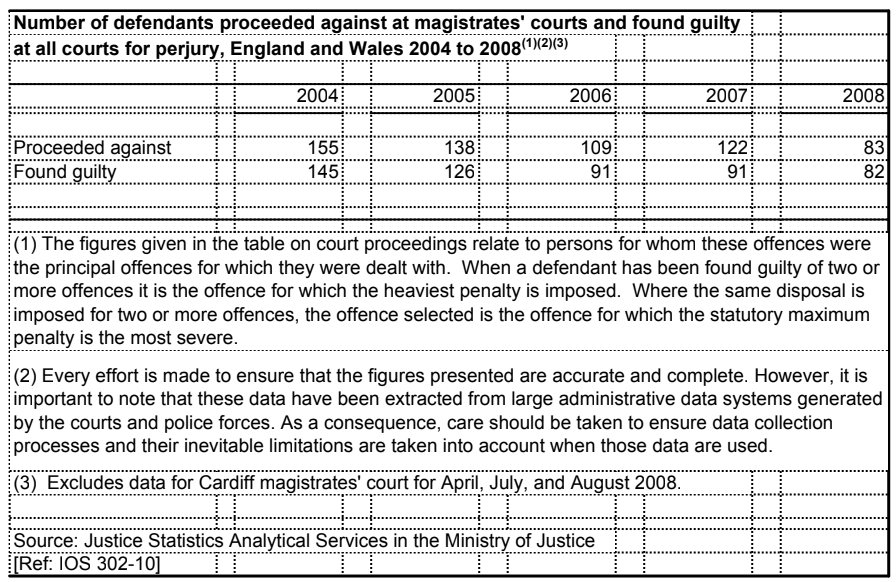 Note, however, that not all (or even most) prosecutions for perjury involve in court testimony. Out of court statements made under penalty of perjury or under oath (such as in affidavits) can also be a basis of a perjury prosecution.

For comparison's sake with the information on Colorado below: "On Census Day, 21 March 2021, the size of the usual resident population in England and Wales was 59,597,542 (56,490,048 in England and 3,107,494 in Wales)" which is about 12 times the population of Colorado, which has roughly the same per capita rate of perjury prosecutions.

How often does it actually happen that a party is actually proceeded against for perjury / misleading a judicial body / contempt of court, or faces any other consequences for doing so other than losing their dispute/point/case? And whatever the answer, why is this?

Perjury prosecutions based upon court testimony do occur and result in convictions, but they are very rare.

Colorado is a state with a population of roughly five million people. There are many hundreds of thousands of court cases in the state each year in which often multiple affidavits or declarations are filed and depositions are taken under oath, there are thousands of evidentiary hearings in the state courts of the state each year, and there are myriad documents executed by its citizens under oath or under penalty of perjury outside a court setting (e.g. in government paperwork).

An intentional false statement of material fact (i.e. a lie) made in testimony made under oath in a hearing, trial or deposition, or in an affidavit or a declaration or other document signed under penalty of perjury, can be prosecuted criminally in a perjury case under state law.

Most of the statements made under oath do not contain perjury, but a significant minority percentage of such statements do. Even if perjury were committed just 1% of the time (which is probably low), there would be thousands of instances of perjury committed each year in the State of Colorado.

How many perjury prosecutions were commenced in the entire state of Colorado in all of its state courts (except Denver county court which is statistically separate) in the 2019 fiscal year (ending June 30, 2019)?

There were 5 filed in District Court, which were probably felonies, not all of which would have involved in court testimony.

There were 2 filed in juvenile delinquency actions (and most likely did not involve in court testimony).

There were 6 filed in County Court, which were either misdemeanors or were criminal complaints that would later have been transferred to District Court and would be in that case duplicative. These cases are also unlikely to have involved in court testimony.

A significant share of those prosecutions, moreover, would be for instances of perjury not involving testimony in court. Probably only 1-4 cases in Colorado involving court testimony under oath are prosecuted in a given year out of thousands of cases each year where perjury actually happens. It would be rare for more than one to go to trial each year and in many years, no cases of this kind would go to trial.

For example, some of those prosecutions would involve a false statement made under penalty of perjury in an application or report to an administrative agency.

There is no reason to think that plea bargaining rates are significantly different in perjury cases relative to other kinds of criminal cases, so there are probably no more than one or two perjury trials in the entire state of Colorado in a typical year.

Despite the fact that the threat of a criminal prosecution for perjury is a backbone of our court system and many of our administrative and civil legal processes outside of court, perjury prosecutions are almost never brought.

Contempt of court proceedings brought in the same criminal case or civil case in which the perjury took place are possible and probably more common than perjury prosecutions (and have basically a misdemeanor offense punishment in this context) but are still very rare.

One of the reasons that this is rare is epistemological.

Proving that someone made a false statement of a material fact is relatively easy and is sufficient to get a correct result in the matter being decided by the court. But proving that someone made a false statement intentionally, rather than due to a mistake of memory or perception is much more difficult to establish beyond a reasonable doubt. Even in cases where a judge makes a finding of fact that a particular statement upon which a witness testified is not credible, judges typically go to great pains to refrain from accusing the witness of actually lying unless no other explanation is possible.

Another factor is that when a party to a case lies under oath and the judge or jury doesn't believe that party's testimony, the negative result in the lawsuit or criminal case that results from that determination is often considered a sufficient punishment so the extra burden of a collateral perjury prosecution is not justified.

18
How often do people who make complaints that lead to acquittals face repercussions for making false complaints?
10
Why aren't all guilty people charged with perjury
2
why is a person allowed to lie in court and get away with it?

4
How is authenticity of a given evidence determined?
5
Can an ISP respond to a DMCA counter notice on behalf of a user?
0
Do judges in Massachusetts always have original jurisdiction even in "trials by jury"?
1
how to prove perjury?
1
What do you do when the truth is something that can be proven false beyond a reasonable doubt?
11
Has anyone been convicted of perjury for false DMCA takedown notices?
3
Is an offer of a discount an acknowledgement of guilt of negligence and misconduct?
21
Adapt the oath of truth to a reasonable version?
5
Can perjury apply to arbitration proceedings?
1
In civil court what happens when two cases overlap?