I'm asking this question because different sources say different things. The news media I've seen, visual, audio and text keep on running stories claiming that New Zealand has now banned semi-automatic rifles and implemented a buyback scheme. Other sources claim that the government has banned, specifically, what they call MSSA (Military Style Semi Automatic) rifles. Here is a rundown of what is an MSSA according to Wikipedia (hopefully this information isn't out of date). Any semi-automatic rifle or shotgun that features any of the following will be classified as an MSSA, and therefore is now banned (at least for the majority of New Zealand's citizens:

*A folding or telescopic butt
*A bayonet lug
*A military pattern free-standing pistol grip
*A flash suppressor
*A magazine that holds more than 7 rounds; magazines holding up to 10 rounds may be modified to carry 7 rounds. The limit on rimfire is 15 rounds per magazine.
*A detachable magazine that holds more than 10 rounds, excepting rimfire magazines, which may carry 15 rounds.

To quote Wikipedia (and again, I hope this information isn't out of date):

A Category firearms are those that do not fall into any other category, and are the vast majority of legally-owned firearms in New Zealand, and support a surprisingly wide number of types. For example semi-automatic AR-15 style rifles are permitted in this category provided they can only hold 7 or less rounds as well as meeting the other criteria.

However many media outlets have claimed that there's been an outright ban on semi-automatic rifles and shotguns, just as in this ABC article that claims:

New Zealand's Government has launched a multi-million-dollar, six-month buyback scheme to compensate owners of semi-automatic weapons, which were newly banned in the wake of deadly attacks on two mosques in Christchurch.

New Zealand previously allowed the sale of semi-automatics that were limited to seven shots.

In the New Zealand Herald we have this article from April, which includes this diagram: 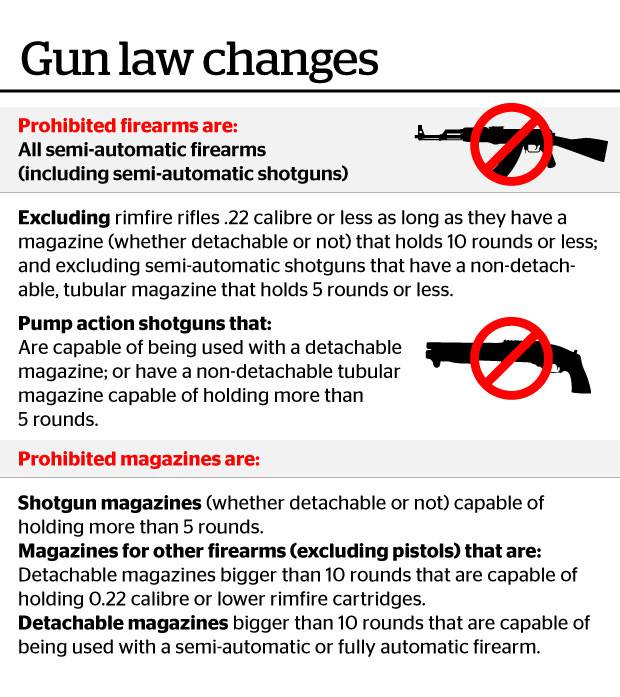 Basically meaning all semi-automatic rifles are banned except for .22 rimfire rifles if the magazine has a capacity of less than 5 or 10.

A little earlier in March we have this article headlined:

Though such a ban would still allow guns like the semi-automatic AR-15 provided its magazine could hold no more than either 7 or 10 rounds.

I'm really confused about all this information which doesn't sound consistent among the sources.

Can anyone point me to a source explaining the actual new laws currently in force, or can someone explain them to me?

Part of your confusion may come from the fact that there were two separate actions.

For the purposes of the Arms Act 1983, the following firearms are declared to be military style semi-automatic firearms:

You can read here the Arms Act 1983 as it stood on that date. The possession of a military-style semiautomatic firearm was forbidden under Section 20 of that act, unless one held a firearms license with a special military-style semiautomatic firearm endorsement. So the effect of the Order in Council was to forbid the possession of all semiautomatic firearms matching the Order's description, except by the (presumably few) people that had been granted the special license. As an Order in Council, this measure could be taken by the government directly without waiting for Parliament to act, and was apparently meant as a temporary stopgap.

On April 11, Parliament did pass legislation, the Arms (Prohibited Firearms, Magazines, and Parts) Amendment Act 2019, whose (much longer) full text can be found at that link. I would rather not try to summarize the whole thing at this time, but one of its effects seems to have been to eliminate all references to "military-style semiautomatic firearms" from the law, and applying restrictions to a (presumably broader) class of "prohibited firearms". This act also revoked the previous Order in Council which was then no longer meaningful or needed.

Not the answer you're looking for? Browse other questions tagged firearms new-zealand weapons or ask your own question.

1
Do citizens of the Cook Islands automatically have New Zealand residency?
2
Is an uncocked semi-automatic with ammo in the clip considered “loaded”?
3
Rights to deal with tresspassing livestock (New Zealand)
0
Coronavirus Lockdown Laws - New Zealand
8
How common are import bans of what is freely traded on national markets?
2
Am I person under New Zealand law?
2
Disputes Tribunal handling confidential information (New Zealand)