Is it allowed to ignore copyright claimed over an exact reprint of a public domain work?

The question is general, but I will explain it with a specific example I am currently facing.

In 1890, a book was published in Germany. Its author died in 1915. According to my understanding of copyright law, this book is now indisputably in the public domain in every country in the world and so I can do anything I want with it, though please correct me if this is not true.

In 1974, a new reprint edition was published by the same publisher. At that time, the work was apparently still copyrighted, less than 70 years having passed since the author's death. The content is absolutely identical in all respects: close inspection of the two editions (which I have at hand) reveals that the 1974 edition was printed with plates that have been copied, either stereotypically or photographically, from the original 1890 plates. Apart from the title pages and the design on the endsheets, the type is indistinguishable.

The 1974 edition is now out of print. I have contacted the publisher (which still exists, absorbed into a large and renowned German academic publishing conglomerate) regarding licensing and reuse. They claim that they still own the copyright on the 1974 edition, and they give me a quote of over 1000 euros to reproduce even just a few pages, and around 10000 euros for the entire work (which is less than 100 pages in total).

Suppose I ignore their avaricious demands and reuse the text anyway. Is this safe? I do intend to credit the source, and I will claim that I am reproducing excerpts of the text from the 1890 edition (which is truthful, as far as anyone could know, because I could easily do the actual retyping and/or OCR using my physical 1890 copy). I will not mention the 1974 edition. However, the result will be that my publication will contain text which is an exact copy of the 1974 text, over which the publisher apparently reserves rights and expects licensing fees. Am I at any risk of legal trouble here, or is my defence watertight?

A (legal) derivative work has its own independent copyright

I'll use the same example Wikipedia does, L.H.O.O.Q.: 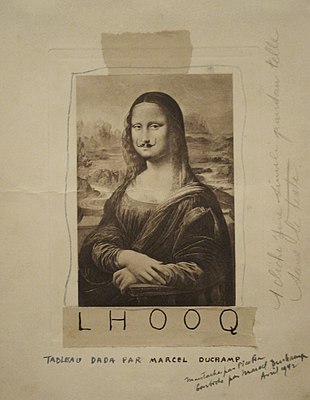 This is a derivate work of da Vinci's Mona Lisa. It's a legal work because the Mona Lisa was well and truly public domain partly because da Vinci had been dead 401 years but mostly because he died 191 years before the first copyright law was passed.

However, it has it's own independent copyright which is still in effect because Marcel Duchamp, it's author only died in 1968.

Anyone is free to copy the Mona Lisa. Only people with permission or who meet the exceptions to copyright such as commentary or criticism (as here) can copy L.H.O.O.Q. Of course, there are a lot of potential infringements of Duchamp's copyright out there.

However, anyone can also copy any non-original components of a derivative work - like the Mona Lisa parts of L.H.O.O.Q.

If the 1974 book is a derivative work of the 1890 book then it has it's own copyright and you can't copy the book. You can copy anything that is not original, like the text.

However, it appears that your assertion is that 1974 book is, in fact, a copy of the 1890 book; if so, then it has no independent copyright as it is not a derivative work. The "title pages and the design on the endsheets" would appear to be independent work.

From the description in the question, the 1974 edition added nothing new to the work. In the US and the UK, it would not have any separate copyright at all. As described in the Wikipedia article "Threshold of originality", in most countries a degree of originality is required for copyright protection to apply. The EU uses the standard of "whether the work is the author's own intellectual creation." Under this standard also, the 1974 edition would appear not to be entitled to a separate copyright. It is (apparently) not a derivative work, but simply a new printing of a work first published in 1890.

If the above is correct, no copyright claim for infringement by the publishers of the 1974 edition of the work would be valid. However, this depends on the question having correctly described the 1974 edition. It also depends on the above being an accurate assessment of the laws of the various EU countries. Copyright in the EU is a matter of national law, subject to the minimum standards of the Berne Convention. But the Berne convention does not set standards for the minimum required degree of originality.

Translations, adaptations, arrangements of music and other alterations of a literary or artistic work shall be protected as original works

There is no mention of editions or printings.

Before depending on the above assessment, one would be wise to consult a lawyer knowledgeable about the copyright laws of the relevant country or countries. The publishers of the 1974 edition could certainly choose to sue. The above analysis suggests that they would not win, but definite assurance on that point is beyond the scope of Law.StackExchange.

Going by what you say, copyright on all pages that appear in the 1974 reprint other than the title pages and the design on the endsheets has expired. Having learnt that you want to reproduce those pages, their telling you that they own copyright on them and trying to get you to pay them for the "right" to do what you want to do sounds very much like making a false statement towards the aim of receiving a financial gain. I have no idea whether the false statement was made knowingly or unknowingly, but a judge might expect a "renowned German academic publishing conglomerate" to know full well that it patently obviously doesn't have copyright over work (including typesetting work) that was done for the publication 131 years ago of a book whose author died more than 70 years ago.

I guess somebody might ask whether the typesetter lived until 1951, but I've never heard that kind of question asked in respect of a book copyright question before, and I suspect if someone were to advance it they would be laughed out of court.

PS I wonder how many people are paying this company money on the basis of believing similar statements it makes about other books.

14
Sputnik-era NSF-funded books: is this a license?
4
Is the Soncino 1961 translation in the public domain?
0
Can I print scans of a book's pages in my book?
1
Which year to put in copyright notice when mixing old content?
2
How does public domain work?
2
Can I copy & paste an entire article from Medium if it's written by me?
0
Is a book formatting subject to copyright laws?
1
Am I allowed to reproduce work published on a website for free which bears an "all rights reserved" tag?