Do pedestrians have the right of way in parking lots?

Consider a parking lot, such as this one: 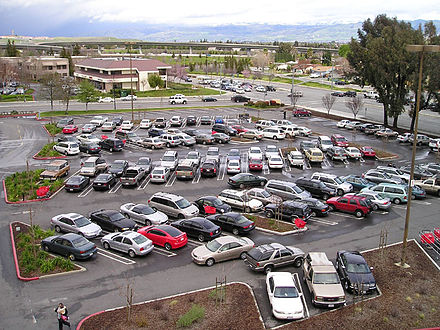 specifically, its one-way lanes. If a pedestrian is crossing them, does he have the right of way?

If a car hits a pedestrian there, is there a conceivable scenario where it might not be found to be at fault?

Asking about California, if this matters.

There is no statutory statement in the Vehicle Code which addresses the question: there are provisions regarding "roadways", intersections and marked crosswalks, and no provision that says "everywhere". The determination of liability then reduces to general principles of liability and negligence, which are very fact-centric. An example of a scenario where the driver is not at fault is when the driver is driving down the lane at an appropriate speed and a pedestrian leaps into the lane from behind a parked car (is obscured by the car) right in front of the car. The question that the courts would ask is whether the driver was using ordinary caution (watching for pedestrians or cars backing out), and could have reasonably stopped. See People v. McLachlan, where some pedestrians had crossed the roadway and then the

pedestrians suddenly leaped backward to the west, directly in front of defendant's car, which was then 20 feet from them

and he hit them. The court reasoned that

it is clear that when a pedestrian crossing a roadway in a crosswalk is so far from the path of an approaching automobile and proceeding in such a manner that no interference between them is reasonably to be expected, the driver of the automobile need not wait for it to develop

"Right of way" is not a carte blanche to act irresponsibly. Even in a marked crosswalk on the roadway (where the driver bears all of the duty of care), there are scenarios where a hyper-cautious driver could not avoid hitting a pedestrian. See Schmitt v. Henderson:

Not the answer you're looking for? Browse other questions tagged united-states california liability traffic vehicle or ask your own question.

16
In the United States, do pedestrians always have right of way?

2
Right of way: U-turn vs right turn (Illinois)
10
Meter maid in San Francisco blocks the way, and issues the parking ticket while the driver is present
7
Received a sticker on my car window on a private company car park
1
Who is liable when a turning car "interferes" with bicycle going straight? (Pennsylvania)
0
What is the law regarding left-turns at four way stops?
0
The Highway Code and private land - parking and controlled parking zone (by private company)
0
Who has right of way between a legal u-turn vs car driving out of a parking lot as per Texas rules?
0
Turning when oncoming traffic has right of way, but stops for you anyway