What crimes can lead to a house arrest in Austria?

I am writing a piece of fiction in which the protagonist is put under house arrest after a bar brawl. This happens in modern-day Austria. House arrest means he is not allowed to leave the city without prior consulting with the police.

The protagonist does not have any prior convictions.

He is a foreigner and therefore may be a flight risk (because he can easily go back to his home country).

What kind of crime does the protagonist need to commit before, during, or after a bar brawl in order to be put under house arrest? Does the probability of getting house arrest increase, if he is rude to police during interrogation?

I see a spectrum here. 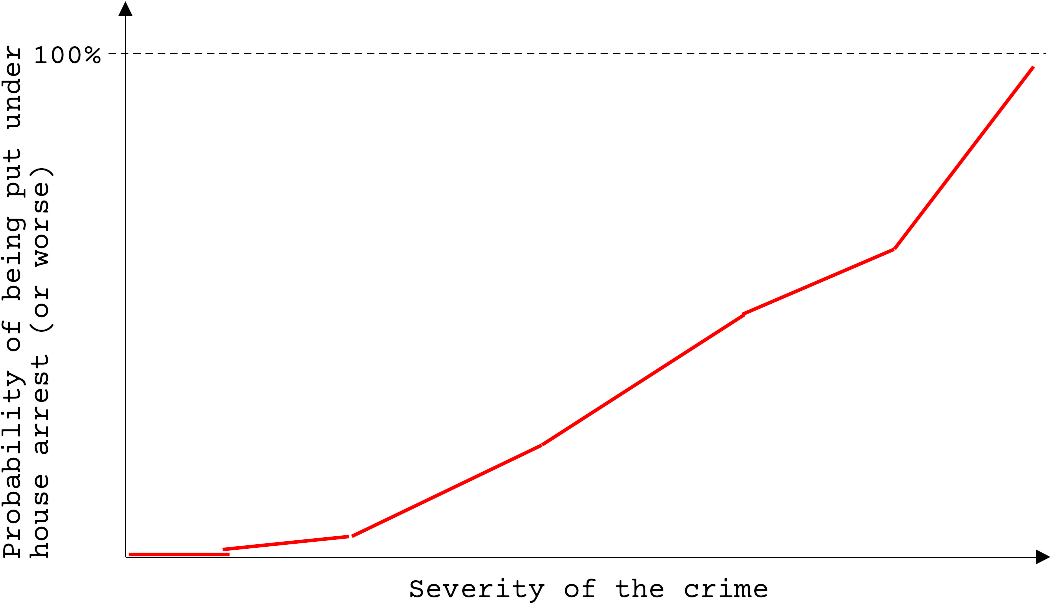 If he verbally insults someone in the bar, or spits in their face (but does nothing more than that), the probability of being put under house arrest is close to zero.

If he murdered someone during a fight, this would definitely lead to a house arrest or worse (e. g. he would be put into jail). The probability here is close to 100%.

Those are the extremes.

I need some crime between the extremes that

One idea is that he may break someone's arm without putting the victim's life in danger. Maybe the police could put him under house arrest until the doctors decide how dangerous that injury is to the victim.

Find below the condictions for the house arrest from the webpage of the Austrian Federal Ministry of Justice, (Google translation). I think this might be helpful to put together a realistic case.

The electronically monitored house arrest (eüH) is the most recent form of execution in Austria, it was introduced in autumn 2010. Basically, people who are sufficiently socially integrated and whose (remaining) sentence does not exceed twelve months are eligible for this form of execution. The eüH, colloquially often called "ankle cuff", must be applied for and can replace the execution of the prison sentence in the prison in its entirety ("front door variant") or shorten it ("back door variant"). The decision on granting the eüH is made by the respective management of the prison as the enforcement authority. Numerous requirements must be met, the existence of which is carefully checked. The criteria to be met include in particular:

The necessary surveys to clarify the prerequisites or to create the supervisory profile are carried out with the support of the “Neustart” association by social workers. This association is a contractual partner of the Federal Ministry of Justice and is also responsible for providing assistance to released prisoners, probation assistance and reconciliation of offenses. The employees of the Neustart Association are also responsible for social work support and, if necessary, for looking after the subjects of electronically monitored house arrest.

Not the answer you're looking for? Browse other questions tagged criminal-law criminal-procedure austria or ask your own question.

12
How far does the fruit of the poisonous tree doctrine extend?
7
If police collected evidence based off of a call they suspected, but couldn't prove, was fraudulant would the evidence be upheld?
1
Is it possible to cancel a tenancy with someone who is most probably a fraudster, just for being a fraudster?
2
Can police charge someone with a misdemeanor in the total absence of evidence?
0
My employer filed a report against me and refuses to pay me
0
Is there duty to report crime that may be committed soon?
4
If a judge evidences a misunderstanding of the law is that grounds for an appeal?
4
Powers of Entry when it is summary-only offence