If a man is raped, resulting in pregnancy, and the woman chooses to carry the child to term, is the man still responsible for child support?

Inspired by Is it true that men are forced to pay child support for children they didn't consent to have?

Let's say Alice rapes Bob and becomes pregnant. She then carries the child to term, against Bob's wishes. Can she then compel Bob to pay child support? Compared to the linked question, here Bob did not consent to sex.

Some Googling led me to Hermesmann v. Seyer, which asserts that in Kansas, "a woman is entitled to sue the father of her child for child support even if conception occurred as a result of a criminal act committed by the woman". However, the text of the article seems to say that although Seyer (the man in the relationship) was underage and therefore incapable of providing consent under statutory rape law, he had actually given consent to the acts under civil law since he didn't complain to his parents. In the hypothetical scenario described above, Bob did not consent to the acts since he was raped.

The treatment of how paternity is handled in cases of rape, from which child support and child custody determinations flow, varies by U.S. state in the United States as a result of an ongoing and recent wave of legislative innovation, prompted by cases in which convicted male rapists sought child custody in connection with children conceived in acts of rape for which they were convicted. A state by state summary of the applicable laws as of January 2020 (which oversimplifies the situation in which there are additional distinctions not noted, some of which are differences in wording that could be relevant to how these statutes apply in the OP case) can be found here. 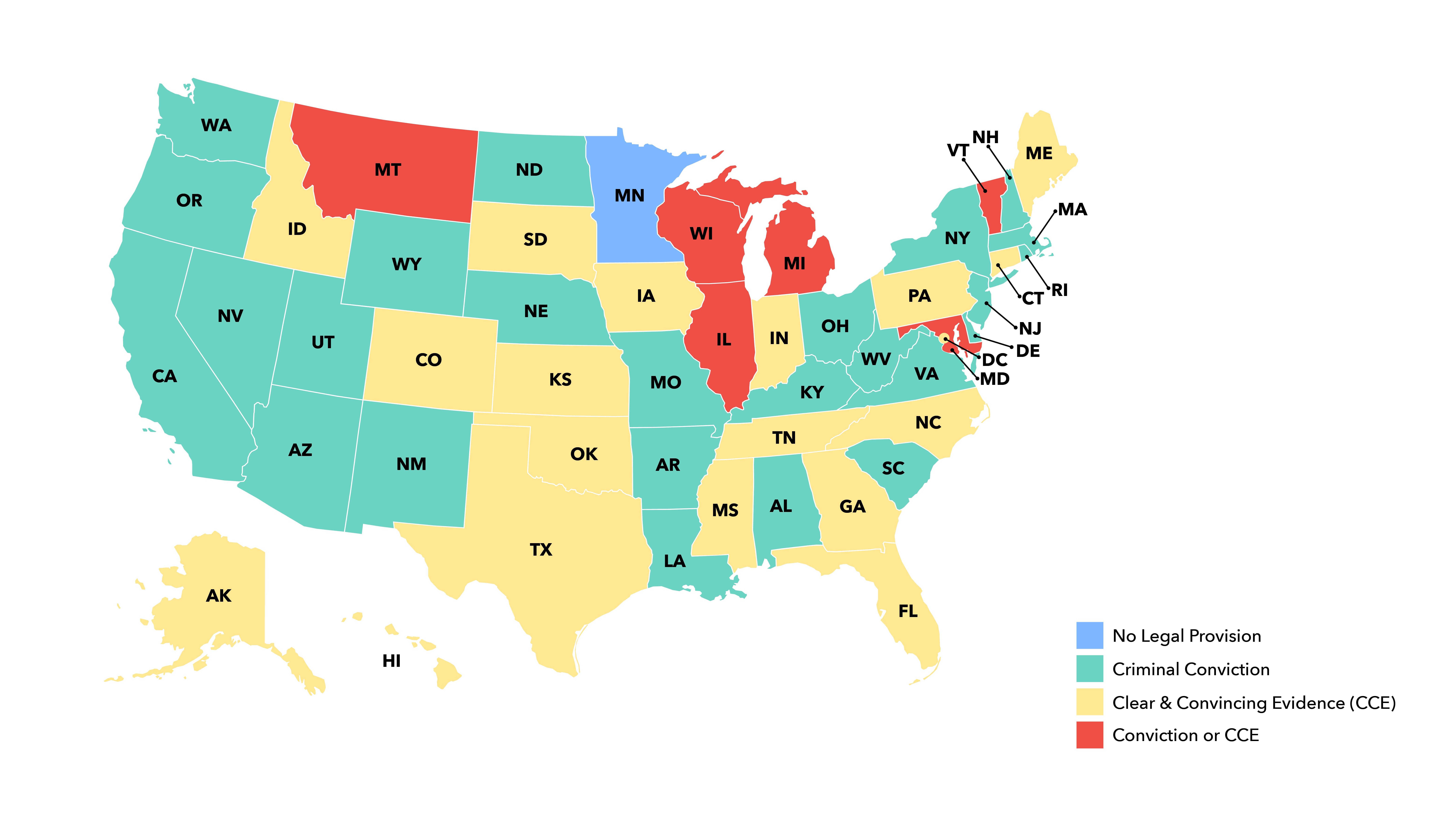 All of these laws are targeted at the case of a woman raped by a man who becomes pregnant, which is factually predominant, something that happens many thousands of times each year in the United States as a whole, and not at the case of a man who, in the course of being raped by a female, causes the female to become pregnant as a result.

Cases of men being raped that are handled by the legal system, and do not involve statutory rape, predominantly involve sexual interaction that is not reproductive, i.e. something other than a man involuntarily having vaginal sex with a woman, often prison rape by a same sex inmate or rape with an object, and also, as in other cases of rape, often doesn't result in a conception of a child due to random chance. Likewise, many women convicted of rape are convicted as co-participants in a crime that involves physical penetration of a victim by a man or an object, rather than sexual intercourse with the woman convicted of the crime. So, the number of cases that could potentially be litigated with respect to this issue is much smaller.

It is also worth noting that under U.S. criminal law, sexual intercourse procured by deception (other than deception regarding the person with whom one is having sex, for example, because of a blindfold or darkness, or deception regarding one's status as a medical practitioner making a medical examination, or as a law enforcement officer making a legally authorized cavity search) is not a crime and does not constitute rape.

Also, generally speaking, having sex consensually in a manner not intended to lead to conception, which, in fact, does result in conception with consent to the sex giving rise to conception (e.g. where there is an agreement to "pull out" that isn't performed due to the acts of one or both parties involved), will almost never be prosecuted criminally as rape, whether or not a jury with perfect knowledge of the facts of the interaction could convict under the law of the minority of U.S. states where this might be possible.

As @user6726 notes, the primary fact pattern related to the OP historically has involved instances of intercourse that are consensual in fact, but constitute statutory rape due to the age of the father which makes it impossible for him to legally consent, and in those cases, the default rule that the biological father of a child is recognized as the father for custody and child support purposes has been the predominant rule.

But much of that case law predates modern rapist-paternity statutes and there is an equal protection argument that those statutes should have a parallel construction, although to the best of my knowledge, there are no reported appellate cases that have tested that issue. It remains an open issue of first impression in most, if not all, jurisdictions that have adopted rape-paternity statutes.

In Minnesota, which had not adopted such a statute as of January 2020, being raped would not be a defense to a paternity, child custody, or child support claim.

There is a substantial pattern of decisions to the effect that a male, being an underage minor legally incapable of consenting to sex, who fathers a child is still responsible for child support despite the potentially criminal nature of the circumstances. See in re. Paternity of KB, 104 P.3d 1132

The reasoning in these decisions affirms by constantly reciting the fact that these are actually-consensual cases of intercourse despite the overarching doctrine that the minor is incapable of consent, which could easily provide a basis for distinguishing actually-nonconsensual rape of an adult male from the preceding circumstances. However, these cases also rely on the plain language of statutory requirements that a father must provide support for his child. While it would seem quite unjust to victimize a man twice in such a circumstance, the plain language of the statute says what it says, and it is (traditionally, in the US) the duty of the legislature and not the courts to write laws. Since there does not appear to be case law that directly addresses the matter, it's not a forgone conclusion how such a case would be resolved but the weight of precedent is in favor of the statutorily-mandated paternal obligation, lack of consent notwithstanding.

Pretty-much the only exclusion is negligence, and how could that apply in rape?

Who thinks otherwise, why not cite a few cases?

Not the answer you're looking for? Browse other questions tagged rape child-support or ask your own question.

36
Is it true that men are forced to pay child support for children they didn't consent to have?
12
Does Bob have a case if he ends up paying child support due to Alice's deceit?

1
Will X be responsible for child support if Y uses the frozen embryo that X and Y conceived to have a child, even if X doesn't want to have the child?
1
Under what circumstances can a man avoid paying child support for his "stepchildren?"