What does it mean that Scotland is a civil law jurisdiction?

I have learnt recently that Scotland is a civil law jurisdiction (when it comes to private law at least), but one that doesn't have a civil code.

I have also been taught that the main difference between common law and civil law is that common law uses a primarily bottom-up approach in which one starts from the facts of a case and works their way up to precedents, whereas civil law uses a primarily top-down approach in which one starts from the law and works their way down to the various situations that can arise.

With this in mind, I find it difficult to understand how civil law can be applied without a civil code. How does it work in practice?

Both civil law and common law have civil codes, so that isn't the difference. It is common in civil law jurisdictions for these to be called civil codes and consolidated into the great big book of law. In common law jurisdictions, the civil code is scattered through legislation, regulation, administrative and case law and often not consolidated although, each piece of legislation typically deals with only one (or a related number) of topics.

In a common law jurisdiction, the role of the judge/jury is to decide the dispute that the parties have brought to the court based solely on the arguments and evidence that they make. A judge who seeks their own evidence or decides the case based on a law the parties have not argued is making a mistake. The judge is free to say to the parties "But what about xyz law?" and let them make an argument about that but they would be denying the parties natural justice if they decided the case on xyz law if that law was not argued.

In civil law jurisdiction, the role of the judge/jury is to find out the truth. They have inquisitorial power and decide the case based on all the evidence, the law that was argued and their own knowledge of the law.

In common law jurisdictions, the cases decided by the courts are just as much the law of the land as the acts passed by parliament. When a court hands down a decision on a certain fact pattern, then all courts lower in the hierarchy must make the same decision when presented by a similar fact pattern. These are binding precedents.

In addition, decisions of same level or lower courts (where not actually the ones being appealed) as well as decisions in "parallel" jurisdictions are persuasive precedents. A parallel jurisdiction is anything where the law is close enough that it makes sense to use it: Australian courts will tend to look first to other Australian states, then to England & Wales, Canada, New Zealand and other Commonwealth countries then the United States of America and then to civil law jurisdictions. There is nothing nativist in this, it is just that these are the jurisdictions where the laws are "closest" to one another: partly because the courts have historically done this (which tends to lock the common law together), partly because there has been governmental will in creating harmonized laws in Australia (i.e. enacted in each state and territory but essentially the same law - often word for word) and partly because parliaments, when drafting legislation, nick ideas from other parliaments.

If the Supreme Court of Western Australia has made a decision on a similar fact pattern under a similar law, a District Court judge in New South Wales had better have some damn good reasons for deciding this case differently but they wouldn't automatically be wrong if they did. However, if the precedent had been set in the Supreme Court of New South Wales than the District Court judge would be wrong to decide differently.

Naturally, a lot of argument in common law courts is about why the facts of this case are sufficiently similar/distinct that the precedent should/shouldn't apply. Also, common law judgments emphasize the reasoning that led the judge from the evidence to the conclusion and include detailed analysis of the case each party presented - this is because they need to be understandable to a wide audience.

Court hierarchy can be quite complex, this is the one for NSW, Australia: 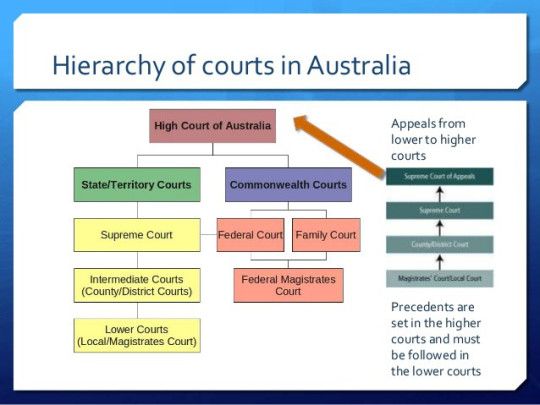 In a civil law jurisdiction, courts are not bound by the rules of precedence - each judgement is a first principles analysis of the facts and the law. This is not to say that civil law judges do not use other judgments in their analysis but they are not required to do so.

Not the answer you're looking for? Browse other questions tagged civil-law civil-legal-system scotland or ask your own question.

2
Exclusive sport fishing easement/profit with no dominant land: nature, alienation, apportionement, term and jurisdiction specifics?
4
Does Canada have a less litigious culture than the United States?
2
Why do legal scholars influence civil codes' interpretation, more than judges?
1
Why haven't jurists corrected the ambiguity of 'civil law'?
2
Can I initiate a civil lawsuit in order to get the answer to a legal hypothetical?
8
Is there any (which?) English speaking jurisdiction that uses a civil (continental) law system?
5
Can a state make a law that deputizes individuals to sue individuals in other states?
2
What does court of domicile mean?