Does this image with a subject containing graffiti in the background infringe on the graffiti artist's copyright?

Here's the image in question: 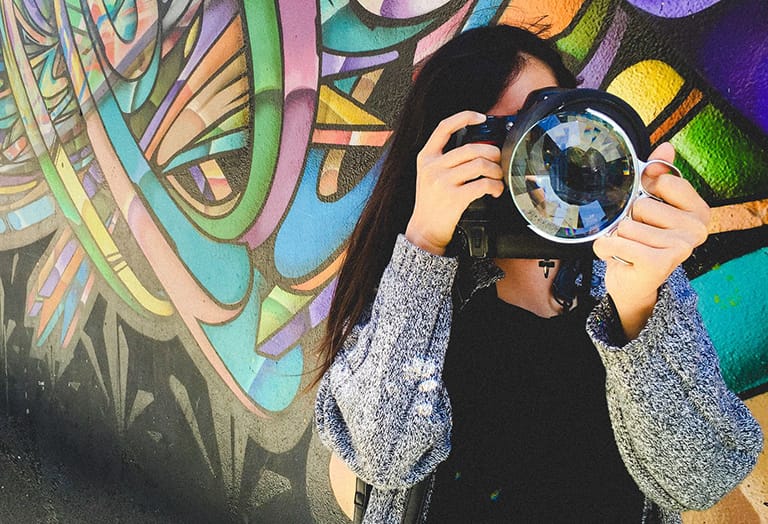 Basically, the subject in the foreground is showcasing a company's product for an advertisement. The graffiti holder has argued that the image infringes on their copyright. My guess would be that this image does not infringe on the copyright, because it is novel and the graffiti is not the subject matter in the photo.

The applicable jurisdiction here would be the state of California.

The building that the art was placed on has been abandoned for many years, therefore giving me the impression that the art was illegally placed. A recent google street view image has identified that the building has been condemned and is the future location of a Boys & Girls Club SF:

(you can still see the top of the artwork in question in the link below, if you look closely above the retaining wall to the south east).

You are in effect asking if this is a case of Fair use, an important US-specific legal concept in copyright law. Please review this question for an overview of fair use. See also This statement from the US copyright office

Courts evaluate fair use claims on a case-by-case basis, and the outcome of any given case depends on a fact-specific inquiry. This means that there is no formula to ensure that a predetermined percentage or amount of a work—or specific number of words, lines, pages, copies—may be used without permission. ("More Information on Fair Use" -US Copyright office)

Let's look at the fair-use factors in the case of this photo:

Defendants removed so much of the original that, as with the Cheshire Cat, only the smile remains. Defendants started with a low-­resolution version posted on the City’s website, so much of
the original’s detail never had a chance to reach the copy; the original’s background is gone; its colors and shading are gone; the expression in Soglin’s eyes can no longer be read; after the posterization (and reproduction by silk-­screening),
the effect of the lighting in the original is almost extinguished. What is left, besides a hint of Soglin’s smile, is the outline of his face, which can’t be copyrighted.

(I take this to mean that the elements actually copied do not have enough original content to be a copyrightable wqrk.)

This is not a clear-cut case, in my view, but the case for fair use does not seem strong to me.

A number of comments and some other answers have raised the question of whether graffiti made without the permission of the owner or tenant of the location, and therefore illegally, are entitled to copyright protection.

The first thing to say is that there is nothing in 17 USC (the US copyright law) that conditions copyright protection on the legality of the work, or of its publication.

Case law on this precise issue is not easy to find, nor does there seem to be much of it.

Several high-profile companies, American Apparel, Coach, American Eagle Outfitters and H&M who shot advertisements in public spaces, have found themselves inadvertently in the midst of such legal disputes with street artists. Even though an advertiser may have had permission from the property owners, even though the “artwork” was unsanctioned and unsigned or “tagged,” the graffiti artists have come forward after the ads were already in circulation, identified themselves and sought compensation and damages.

It goes on to say that:

These cases tend to be settled out of court, because regardless of the merit of an infringement claim, they are costly to defend and the unwarranted negative publicity can injure a company’s reputation. ... Also, from a legal standpoint, the question of whether the copyrights of illegally created street art are valid has not yet been determined – so there would be some element of doubt as to how a litigation would be decided.

*The Atlantic's article "Can Graffiti Be Copyrighted?" about the case of graffiti artist David Anasagasti's case against American Eagle Outfitters for use of his work (and several other similar suits) quotes Philippa Loengard, assistant director of Columbia Law School’s Kernochan Center for Law, Media, and the Arts as saying:

Given what I know of the case, this is one of the most blatant examples of copyright infringement

None of the suits mentioned in the story seem to have resulted in a court decision as yet.

In Falkner v. General Motors Company, the trial judge held that the art was not "part of" the building and thus the exemption for photos of architectural works under 17 USC 120 does not apply. However it denied plaintiff’s DMCA claim and his claim for punitive damages.

The court held that:

because the facts in the record tend to establish—if anything—the lack of a relevant connection between the mural and the parking garage, the Court cannot hold as a matter of law that the mural is part of an architectural work under Section 102(a)(8). Thus, it cannot reach the issue of whether Section 120(a) applies to the mural to permit photographs of the mural.

This article notes that:

Graffiti pieces increasingly attract the attention of numerous collectors, gallery owners, publishers, filmmakers, and journalists. Pieces from famous graffiti artists have sold for hundreds of thousands of dollars in the art market. Graffiti pieces have even been given as diplomatic gifts. Galleries are seeing record attendance at exhibitions of graffiti works, and publishers have generated a boom of photographic books on graffiti and street art. (citations omitted)

The article notes that Tattooed Walls a book by Peter Rosenstein about NYC Graffiti, reproduced images of many works of graffiti without permisison, the author believed that these were fair use because they were posted in public places. Several artist sued, a settlement was agreed to, and the book was withdrawn from publication.

The article mentions a suit against Tony Hawk’s Pro Skater 2 Official Strategy Guide, by the author of a work of graffiti which was reproduced. The suit was initially dismissed for lack of copyright registration, but the court said that it “assumed, without deciding, that the work is copyrightable.” When the suit was refiled after registration, a motion to dismiss was denied, and the parties then settled, so there was no court decision on the merits.

Other simialtr cases are mentioned. The article goes on to analyze the law and the purposes that copyright law serves, and give reasons why such works should be protected. But none of this cites an actual case where an illegal graffito has been held protected.

The Falkner case will not produce such a ruling, because the art in that case was authorized, indeed invited, by the building owner.

In the US, architecture can be copyrighted (works created on or after December 1, 1990), so you can't just copy a building, in whole or in part. But "Architectural copyright does not apply to pictures if the architectural work is regularly visible from a public place." Wikipedia

(Not so lucky in France, where they treat a photo of the Eiffel Tower (1889) as if you are stealing the Eiffel Tower by making a copy of it. Sweden took a similar despicable stance. https://alj.artrepreneur.com/copyright-public-art/)

In the USA, you can photograph a sculpture in a public place and you hold copyright on the photos. (article written for artists) http://cjam.info/en/copyright-and-taking-pictures-of-sculptures-2/

But most discussions say you can't use photos of public artworks any way you want. http://wallpapered.city/blog/basic-copyright-issues-in-outdoor-mural-projects/ ; https://alj.artrepreneur.com/6-copyrights-street-art/ Photos for your personal use or for publication in reporting are not a problem, but "commercial use" is a problem. In other words, the copyright holder could have a claim if you actually use the photo for promotion, but merely posting it on Instagram (and here), in itself, probably is not a violation at all.

It is beyond despicable that Instagram would delete your account over one possibly baseless complaint. No matter what, they should reinstate your account (minus the one image, pending resolution). (Do you have other "strikes?) Did Instagram get into the photo-sharing business yesterday?[sarcasm]

If the painter sold the rights to the painting, your photograph cannot violate their rights because they don't have any. Whoever bought the rights could have a claim, or be the one to grant (give or sell) you permission. Maybe the building owner purchased the rights. Consider asking them whether they own the right because you want permission to commercially use the image of their wall art; you might be surprised.

Focus: "Thinking outside the box". Different approach than the usual ones liable to be suggested here.

I "know nothing" legally and am not US based, but offer the following based on a longish lifetimes understanding of the generally understood place of graffiti in society.

It seems reasonably possible that the graffitoiser [tm] is attempting an opportunistic exploitation of a 'right' which they do not legally possess.

In most cases "graffiti" is at best an informal non-authorised 'equal rights to any other similarly unauthorised use' of a space or surface.

Taking a paint brush and creating your own 'work'* in its place, or a nice artistically pure white or black surface, or a new "work" that retains perhaps the portion as seen here but which replaces all "out of image" portions so the new work forms a majority of the final result, may be as fair-a-use of the space as any other. Creators of graffiti may in some cases respect the prior 'works' of others or avoid defacing areas with formal content deemed of artistic merit BUT equally, may without apparent concern, create new 'works' over part or all or several other existing 'works' by others.

That action, or suggesting that it is a 'just as legitimate' possibility, may influence outcomes.

In many cases "at best" does not apply and such "works" are illegal, and may be both illegal and unwelcome.

I ("knowing nothing") might expect that a "work" would need to somewhat exceed the above "at best" criteria to have claims re its misuse taken seriously.

Not the answer you're looking for? Browse other questions tagged united-states copyright or ask your own question.

5
Is this copyright infringement? Is it fair use? What if I don't make any money off it?