What does international law say about the military action on a disputed territory? 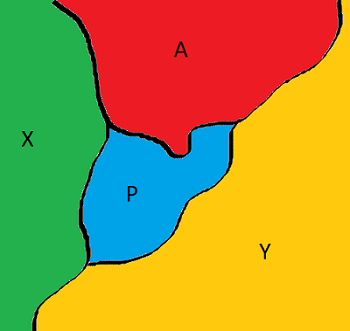 Suppose, two countries 'X' and 'Y' were part of a larger country 'A'. They got independence from A or just got separated, say, in 2001. Both are members of the UN.

X and Y have a disputed area between them called 'P' which is under Y's control.

Is it illegal for X to wage an war on Y? Why or why not?

It is not legal

Under the UN charter, only wars of self-defence are lawful. It is not lawful for X to attack Y. It is lawful for Y to defend itself which may include the occupation of X’s territory if dictated by military necessity.

Not the answer you're looking for? Browse other questions tagged international or ask your own question.

4
When does customary international law become 'jus cogens'?
5
At what point does foreign interference in a civil war trigger law on international armed conflict?
2
What happens if a piece of Literature falls within the Public Domain in one Territory but is Copyrighted within another Territory?
6
What was the basis in international law for the seizure of the Iranian tanker Grace 1?
0
Is it correct to say, that in International Law, the legislature consists of the nation-states and they are the ones subject to the laws do enacted?
0
Where are the duties of a sovereign stipulated in international law?
4
Does Trump's pardon of the Blackwater mercenaries violate international law?
2
Does acceptance of communication with identifying characteristics originating from a disputed territory imply recognition of that territory?
2
Does International Law only apply to countries that ratify treaties and accept the law?