Can a US company ask prospective American employees, contractors or partners about their country of birth?

I decided recently to sign up as a seller on Amazon.com. The first step of the registration process however, asks about the applicants "Country of Birth".

That seems to completely irrelevant and an opening for discrimination. I think the country will be worse off if in the course of ordinary business, people were asked about their countries of birth. In America, we're all supposed to be American (though I can understand in certain very sensitive national security situations)

If anyone can comment on the legality of this, I would appreciate. As a follow-up question, I would be curious to know if Amazon can in any way be sued for asking this and what the potential risk/reward of such a lawsuit would be? 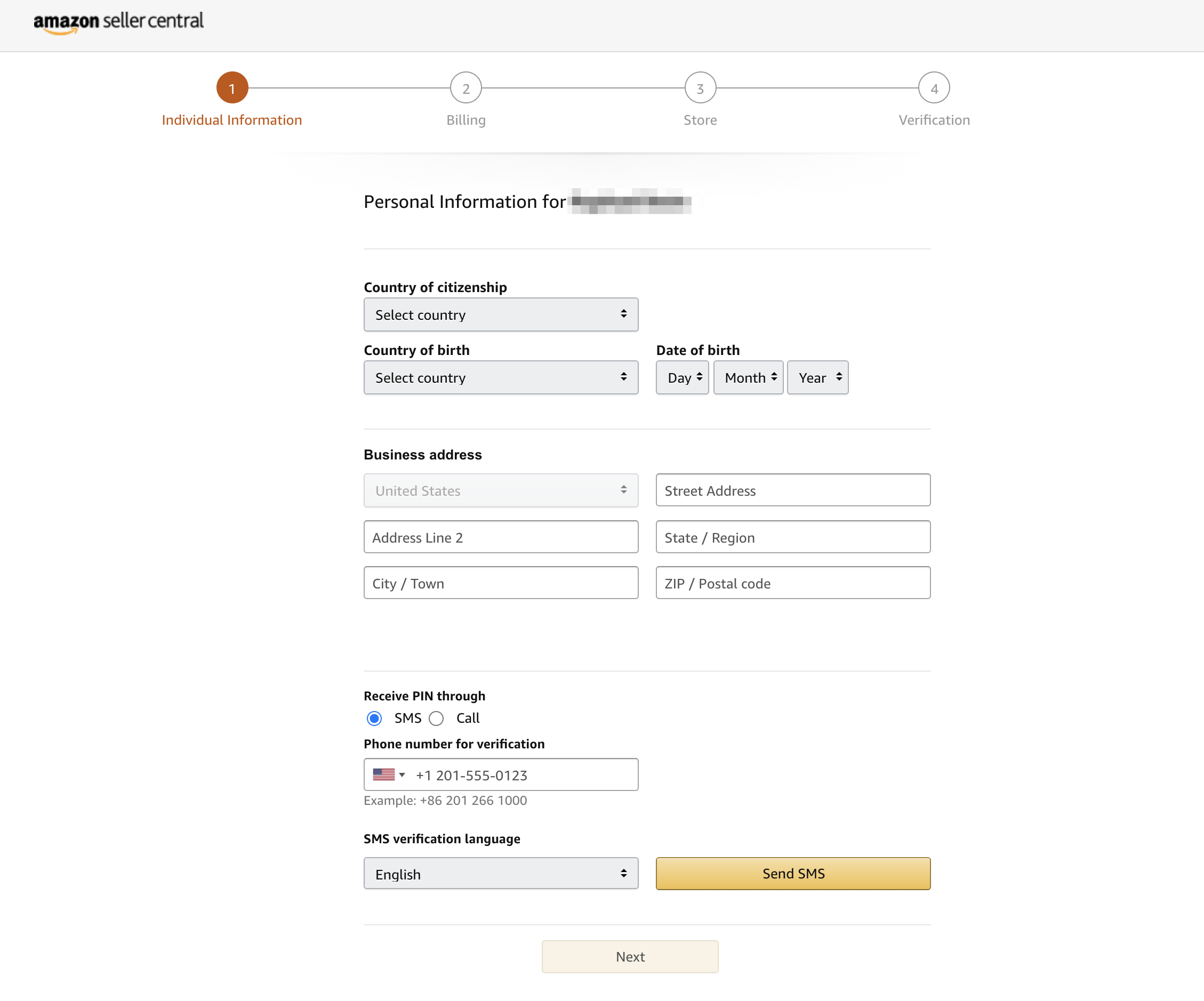 TL;DR: You are likely to have a case in California, Colorado, New Mexico, New York, and Oregon. Read this report for details and, if you've got the balls, file a lawsuit.

First of all, let's make the scope clear: this matter concerns just bare contractual relationship as opposed to employment. Amazon sellers are no employees of Amazon. They are clients. That is, they sign up and receive a long-term service. I therefore answer this question rephrased as "Can one refuse to accept a new client based on their country of birth?"

The answer would have been a very straightforward "No" if it concerned a brick-and-mortar service like a physical shop or restaurant. These places are called "public accommodations" — where discrimination on the basis of national origin is prohibited at federal level.

Amazon is an online service. Are these "public accommodations" for the purposes of Title II of the Civil Rights Act of 1964 or related state-level laws? As per this report, it varies from state to state. In California, Colorado, New Mexico, New York, and Oregon they are, which is the basis for your would-be lawsuit(s) in these states. You may have luck in some other states too, but definitely not in Florida or New Jersey.

Before proceeding with a lawsuit you would need to rule out any possibility that the absence of your country of birth in the select box is unintentional (i.e. not a bug or mere omission). For this you would need to obtain a letter/message directly from Amazon, similar to the one cited in Dave D's answer.

Last question is, in the event the select box included all countries, would the mere presence of it in the form still amount to discrimination (as opposed to mere collection of information)? In this case, to prove your case you would probably have to be refused and somehow prove that the refusal was caused by your country of birth. This is hard because, again, the service sign-up form is no job interview.

I would be curious to know if Amazon can in any way be sued for asking this and what the potential risk/reward of such a lawsuit would be?

Anyone can sue anybody. Fill in the forms, pay the application fees and whoah — you are already suing! How far will your suit go and, particularly, whether it will kick back is a very fact-specific question depending on too many variables. If you are not confident that you can research it yourself, you need to talk to not just a lawyer, but your lawyer.

The EEOC states that national original discrimination in employment is illegal, which is supported by 28 CFR Part 44 (discriminate means "the act of intentionally treating an individual differently from other individuals because of national origin or citizenship status, regardless of the explanation for the differential treatment, and regardless of whether such treatment is because of animus or hostility"). See also Title VII of the Civil Rights Act of 1964:

It shall be an unlawful employment practice for an employer -

(1) to fail or refuse to hire or to discharge any individual, or otherwise to discriminate against any individual with respect to his compensation, terms, conditions, or privileges of employment, because of such individual's race, color, religion, sex, or national origin; or

(2) to limit, segregate, or classify his employees or applicants for employment in any way which would deprive or tend to deprive any individual of employment opportunities or otherwise adversely affect his status as an employee, because of such individual's race, color, religion, sex, or national origin.

The internet widely advises that asking such questions is illegal. The EEOC has a more nuanced view of the matter as articulated here: they say

We recommend that you avoid asking applicants about personal characteristics that are protected by law, such as race, color, religion, sex, national origin or age. These types of questions may discourage some individuals from applying, may be viewed suspiciously by some applicants, and may be considered evidence of intent to discriminate by the EEOC. If you do not have this information when you decide who to hire, it may be easier for you to defend your business against a hiring discrimination complaint.

an individual employed by an employer, except that the term “employee” shall not include any person elected to public office in any State or political subdivision of any State by the qualified voters thereof, or any person chosen by such officer to be on such officer’s personal staff, or an appointee on the policy making level or an immediate adviser with respect to the exercise of the constitutional or legal powers of the office. The exemption set forth in the preceding sentence shall not include employees subject to the civil service laws of a State government, governmental agency or political subdivision. With respect to employment in a foreign country, such term includes an individual who is a citizen of the United States.

This just tells us that in writing the law, Congress left it somewhat open what an "employee" is.

An Amazon seller is, on the face of it, not an employee of Amazon, instead, a seller is an independent contractor. Of course that is a legal question that can't just be decided superficially, see for example California's AB5 (but even under that law, a seller is not an employee). As articulated by SSA

The common law control test is the basic test, using the common law rules, for determining whether a relationship exists between the worker and the person or firm that they work for. Under the common-law test, the employer has the right to tell the employee what to do, how, when, and where to do the job

If the Dept. of Labor or the IRS determine that you are (would be) an employee, then this is illegal discrimination, otherwise it is not. Since you are not paid a wage, the prospects for being deemed an employee are extremely dim. The EEOC gives this guidance on the distinction, with a very long list of examples which in general support the position that a vendor is an independent contractor and not an employee.

A seller on Amazon is neither an employee or a contractor. From Amazon's FAQ for Selling on Amazon:

What is selling on Amazon?

Selling on Amazon is a program that lets individuals and businesses sell their products and inventory on in [sic] Amazon's stores, like Amazon.com.

The form you are completing is to apply to sell products on Amazon's stores.

I can't find the specific reason that Amazon asks for both citizenship and country of birth. However, Amazon is an international company that is required to follow the laws of all countries in which it transacts business. It is possible to purchase products from outside one's own country. Amazon takes on liability to regulate its marketplaces on an international basis and adhering to those regulations may require knowing both country of citizenship as well as country of birth of the seller of a product.

Here is a question asked by someone who was unable to register as a seller because of their country of citizenship or birth:

In this message from Amazon they indicate that they cannot register someone who was born in or is a citizen of Russia or Azerbaijan.

While I can't identify the specific reason that Amazon asks this question, in order to adhere to the regulations for selling internationally it seems that it could be quite reasonable or even necessary to ask the question.

A seller on Amazon is someone who sells their products via Amazon's marketplace. Employment discrimination laws would have no bearing as the seller is not an employee.

If you look under Help/Policies/Program Policies/Countries accepted for seller registration, both Russia and Azerbaijan are included, so you can reside there and sell in the US. Iran and North Korea are excluded (presumably due to sanctions).

If I had to guess, both the form asking about citizenship and the helpdesk answer Dave D. found are due to employee incompetence rather than company intent.

Perhaps there are other countries where Amazon sells and where, due to local laws, asking about the country of birth makes sense, and so this feature unintentionally made it into the interface for US sellers.

Well realistically, it is your choice to sign up for Amazon. They're not making you give them your country of birth. They're telling you "If you want to use our services, you have to give us your country of birth," rather than "We're forcing you to give us your country of birth either way." It's like Apple taking 40% of developer income through iOS apps. They aren't a monopoly. They aren't the only company that sells smartphones. They say "If you use our service, we're taking 40%." So, no. It would not be legal. And as far as suing them, I'm not sure how far you would get with that. What they're doing is completely legal.

Not the answer you're looking for? Browse other questions tagged contract-law employment discrimination nationality or ask your own question.

8
Is employment discrimination crime, or tort, or what?

2
Can I tell my ex-colleague about job offers at my new company after signing an anti-solicitation clause
2
Can an prospective employer ask for information about your previous salary and base their offer on that?
6
Can non-employees ask prohibited questions of a job candidate?
3
Can I ask my employer for details held about me?
5
Can a company instruct employees to not call police?
2
What an employer can legally ask to monitor about user activity
3
Can an employer require employees to be COVID-19 tested at their own expense?
4
Can Idaho employers ask about dismissed criminal convictions?
5
Can a church-run university terminate employees because of their religion?
3
Can employer ask about medical information such as vaccines (not specifically COVID19)?