Ask Question
Asked 26 days ago
Active 26 days ago
Viewed 173 times
0
This question already has answers here:
Can killing be "self-defense" if you are committing a crime yourself? (2 answers)
How does context nullify the Rittenhouse self-defense? [duplicate] (2 answers)
Closed 25 days ago. 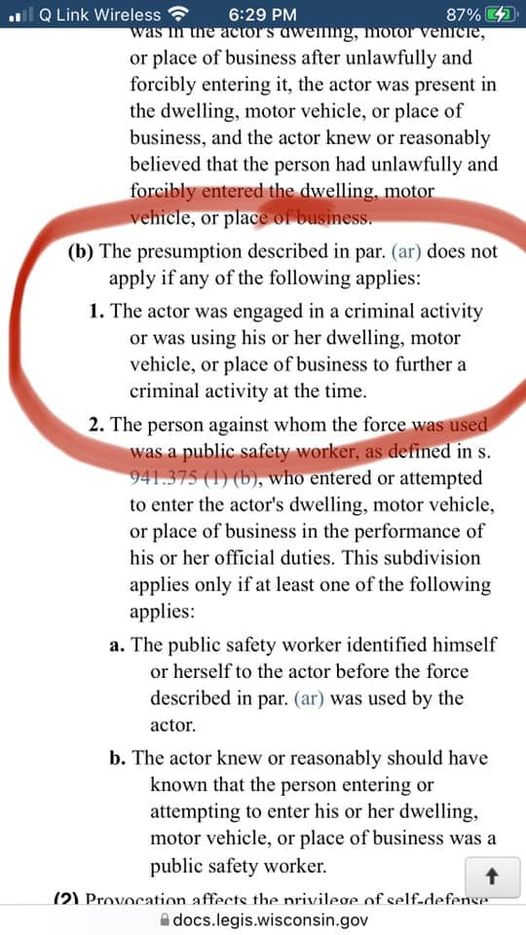 Basically what Kyle Rittenhouse did is clearly self defense.

However, he is carrying a gun against the law. So he cannot claim self defense.

The reason I ask is I thought that the criminal activity must be related to why he is being attacked.

For example, a burglar comes in to my house and I shoot at him and he kills me. Now he's committing burglary.

However, Kyle's crime is bringing a gun illegally. He doesn't rob or burglar people. The fact that his gun is illegal has nothing to do with why people are attacking him.

Or say an illegant immigrant is peacefully enjoying dinner. Then someone robs him and he grabs a nearby gun and kills the robber. Can he claim self defense?

This appears to apply to all criminal activity, BUT

It only applies when defending a dwelling or business

and only removes a presumption, not the full right to self defense

It has no effect on the Kyle Rittenhouse case.


When interpreting the law, you can't take one sentence out of context and try to apply it. You must read the entire law, and interpret each statement in context. In Wisconsin statute 939.48 (Self-defense and defense of others), the section you are citing is (1m)(b)(1). It contributes to 939.48(1m)(b), which modifies 939.48(1m)(ar), which expounds on (1).
To paraphrase the law,

939.48 (self-defense)
1) A person may only use lethal force to defend themself or others from an immanent crime that would cause death or great bodily harm.
1ar) When defending your home or business, you may presume that someone breaking in poses the threat of death or great bodily harm.
1b) On second thought, you MAY NOT presume this under a couple of conditions:
1b1) You are actively engaged in criminal activity
1b2) You have reason to believe the person breaking in is a police officer, fire fighter, or paramedic engaged in their lawful duty.

In legal terms, a presumption is something you shall / may act on before you have firm evidence to the contrary.
If someone is breaking into your home, you do not have to identify them or see clear evidence of a threat (e.g., if it's too dark to see).
BUT if you can see someone clearly, and see a clear threat / clear lack of threat, you are no longer acting under presumption.

So,
If you are in bed, and someone breaks into your house, you may normally fire on them without clearly seeing a weapon.
But if your spouse flips on the light and the intruder sees your gun and surrenders, you may no longer fire. You have firm evidence the intruder is not a threat.

If you are hacking into the pentagon's computers late at night, and someone kicks in your door, you may not shoot at them, because you cannot presume threat. (It may be the FBI serving a no-knock warrant.)
But if you flip on the the light and see someone in a ski mask threatening you with a crow bar, you may shoot him. You now have firm evidence of a threat to your life.

None of this has any effect on the Kyle Rittenhouse case.

Kyle was not defending his dwelling or business.
Kyle's legal defense does not rest on a (claimed) presumption of threat, it rests on (claimed) evidence of threat.
Likewise, the accusations against Kyle don't claim that illegal possession of a firearm negates self-defense.
I don't know of any case law in Wisconsin involving self-defense while illegally carrying a gun, but there's nothing in the statute law that would bar self-defense in that situation.
Share
Improve this answer
answered Nov 11 at 19:08

Not the answer you're looking for? Browse other questions tagged united-states criminal-law self-defense or ask your own question.

10
Can killing be "self-defense" if you are committing a crime yourself?
-1
How does context nullify the Rittenhouse self-defense?

6
Under what circumstances is it OK for a layperson to shoot a fleeing burglar?
1
What is the basis for how aggressive a person can be in self-defense?
0
If someone attacked me with a weapon twice and I hit them back once is that self defense?
4
Has there ever been a successful defense based on "self-defense" in a case of a person charged with killing an on-duty police officer?
0
Why does the legal system make it easier to successfully claim self-defense if it resulted in the death of the assailant?
1
Can lifeboat passengers claim the necessity defense if they are charged with murder for cannibalism?
10
Can killing be "self-defense" if you are committing a crime yourself?
11
If two gunmen are in a standoff, can either of them kill the other and claim self defense in the USA?
1
Does self defense apply if you bait the person?