When a video is uploaded to YouTube, it is visible to the rest of the world, meaning YouTube displays it everywhere. Does this mean all countries' law applies to it?

If the videos are in English and are about science in general, does this mean if some countries someday ban (imprisonment) science videos or use a specific colour in videos, can they extraterritorially enforce this imprisonment if they are in some other countries like the USA or India?

I mean, can a country just bring any YouTuber to a jail outside its borders (using its national language as the language of the video) who uploads content of international appeal because of some law?

Also, can a country just hold liable for YouTube's data privacy practices a YouTuber outside its borders and enforce the judgment if the practices of both YouTuber and their channel and YouTube is legal in their home country?

One last thing is whether the inclusion of ads makes a difference?

Does this mean all countries law applies to it?

If the videos are in english and are about science in general does this mean if some country some day bans ( imprisonment ) science videos or use of a specific colour in videos can they extraterritorialy enforce this imprisonment if they are in some other country like USA or India?

With respect to criminal cases, only if it can arrest that person or convince another country to arrest and extradite that person. Generally speaking, countries will only extradite someone if it is a serious offense under the domestic laws of the country of arrest as well as the country requesting that the person be handed over, and also only if the crime occurred in or was targeted at the requesting country.

Sometimes the arrest is not legal in the place where it is made. For example, in this case decided by the U.S. Supreme Court (the quote is from the official syllabus to the case):

Respondent, a citizen and resident of Mexico, was forcibly kidnapped from his home and flown by private plane to Texas, where he was arrested for his participation in the kidnapping and murder of a Drug Enforcement Administration (DEA) agent and the agent's pilot. After concluding that DEA agents were responsible for the abduction, the District Court dismissed the indictment on the ground that it violated the Extradition Treaty between the United States and Mexico (Extradition Treaty or Treaty), and ordered respondent's repatriation. The Court of Appeals affirmed. Based on one of its prior decisions, the court found that, since the United States had authorized the abduction and since the Mexican government had protested the Treaty violation, jurisdiction was improper.

Held: The fact of respondent's forcible abduction does not prohibit his trial in a United States court for violations of this country's criminal laws.

I mean can a country just bring to jail any youtuber outside its borders ( using its national language as the language of the video ) who uploads content of international appeal because of some law?

Also can a country just hold liable for youtube's data privacy practices a youtuber outside its borders and enforce the judgement if the practices of both youtuber and their chanell and youtube is legal in their home country?

A country can hold anyone liable for anything its domestic laws allow it to hold someone liable for, and can enforce that judgment against any assets it can exert power over. Some countries with similar legal systems recognize each other's court judgments widely. Countries with very different legal systems often don't recognize each other's judgements.

For example, most European countries do not recognize U.S. money judgment for torts (i.e. civil wrongs such as personal injury awards).

One last thing is wether inclusion of ads make a difference?

We know, that YouTubers can sue each other using the US Court system since the "Akila Obviously v Sargon of Akkad" - Akilah Saidah Kamaria Hughes is a New Yorker, Carl Benjamin is a British citizen. Their Lawsuit ended in a US court, and Mr. Benjamin won under Fair Use.

We also know that Youtube offers the ability to flag videos as violating laws in Germany, as the below screen from Youtube shows - so there is some idea that local laws might apply to Youtube.

Youtube might however just block all videos that allegedly violate a countries law from being accessible there, replacing them with the good old 'not available in your country' screen: 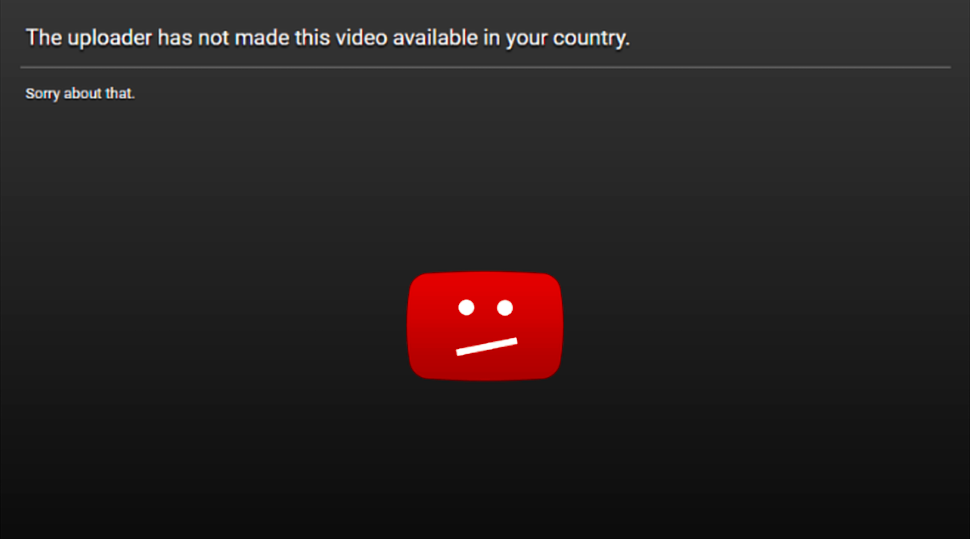 Generally, a multinational company is subject to the laws and regulations of the country where they do buisness, so it will depend on the nature of the country. In Youtube's case, some videos may not be available in countries where it cannot for a host of reasons show the video. This is why so many big Youtubers actually work do adverts for VPNs, which, among other things, allow the user to browse the net as if they were in another country and defeat blocks on content by watching it with an IP of a friendlier country. The vast majority of these blocks are because of distribution rights that the host might have in one country but not another (Netflix may show movies in Norway that it can't in the U.S. because the movie company that owns the movie doesn't have a deal with Netflix for world wide distribution.).

In extreme cases, the nation might just block a website from being accessed on computers in that country (Looking at you, China!) though again, a good VPN service can get around that... if they aren't blocked too.

The Criminal nature of a video's conetent and extranational justice against you can and will boil down to the content maker's host country having an extradition treaty with the country that wishes to prosecute them. Most extradition treaties in the world are bi-lateral, which means that in order to extradite to a foreign country, there must be a similar criminal offense in the home country and the punishments must be silimar. For example, the U.S. would almost never extradite a person to another country to stand trial for blaspheme charges, because blaspheme is not a crime in the U.S. (explicitly banned by the first amendment). And that's if they have an extradition treaty at all... if they don't, they can wholly ignore the matter. As long as you don't go to a country where you can be extradited to the prosecuting country or the prosectuting country, this won't happen. Any attempt to force the matter by the prosecuting nation trying to remove you will cause an international incident.

As a final note, civil suits between third party users are more nuanced (as another answer listed Hughs v. Benjiman (Akila v. Sargon) which was a copyright infringement case.). Generally, the defendent may rely on the local laws they are in, but the courts of that country can only enforce judgement on assests within that nation (Carl Benjamin is not a U.S. citizen but does have assets in the U.S. as I understand it so a judgement against him would have pull from those assests. Additionally, failure to pay would be a contempt of court which is a criminal offense and one he could have been extradited for.)

Not the answer you're looking for? Browse other questions tagged international youtube or ask your own question.

3
How can jurisdiction be limited if platform does not provide geoblocking?
2
Under which country's jurisdiction does a website fall?

10
Which jurisdiction applies in a vessel?
4
Is there a legal reason for why song identification apps can't [won't] identify some foreign music?
1
Do courts have jurisdiction over online service providers from overseas?
2
Which country's employment law is applied in 100% remote work
1
Which country's law applies when scraping / crawling web pages?
0
Under which country's law is perjury across borders adjudicated?
4
Why do so many YouTube channels ask people if it's OK to show them in their videos?
1
Is it legal to use others Youtube videos on my website to teach people
2
How to report copyright infringement in YouTube as a third-party?